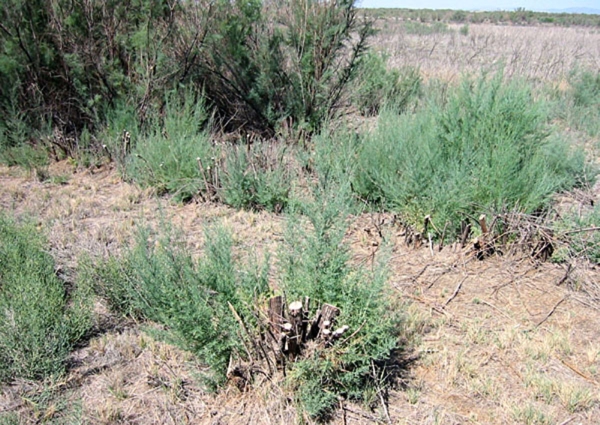 As part of the water conservation plan included in the fifth draft of the Basin 162 Groundwater Management Plan, officials suggested a list of prohibited and recommended plants which would aid in avoiding aquifer depletion.

“We have been barking up this tree now for a long time and it’s time to get off the (ground) on this one,” said Oz Wichman, Basin 162 Groundwater Management Plan Advisory Committee staff member.

According to the data presented in the plan, mature salt cedar trees consume as much as 200 gallons of water a day. Members of the committee recommended that the Nye County Water District pay homeowners $75 to voluntarily remove one mature tree with a maximum of $450 per year per parcel.

“The Groundwater Advisory Committee is recommending that salt cedars be prohibited from being planted in the future,” committee Chair Gregory Hafen said.

“We are further recommending that all salt cedars be removed from a property prior to any new development,” he added.

The committee members scaled down prohibited plants to salt cedars and invasive species included on the list by the University of Nevada Cooperative Extension.

Also adopted was the list by the Southern Nevada Regional Planning Coalition and Southern Nevada Water Authority that outlined plants that can be adapted to the desert environment in the Las Vegas area. Among them are pines, eucalyptus, elms, junipers and palms.

“In order to inform the community about current water issues, to promote conservation and raise the general awareness level, continued water education must be a top priority,” he said.

Other proposed regulations for landscaping included in the plan encompass bodies of water, turf, watering schedules and irrigation systems.

The fifth draft of the document will hit the agenda at the joint meeting between the Basin 162 Groundwater Management Plan Advisory Committee and the Nye County Water District Governing Board on Monday.