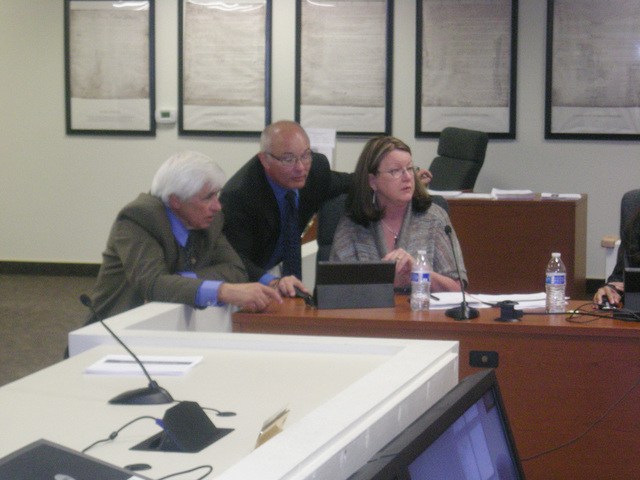 A $1.63 million deficit required commissioners to slash spending in order to pass a balanced budget.

The cuts will not be without some pain, both for some public employees and for the public.

“We’ve cut as far as we can cut and still operate. We’ve cut 60 employees in the past few years. The employees every year have helped out, that’s the major part of the budget, I get that. I’m at a loss here. Somebody have a magic bullet?” asked Commissioner Dan Schinhofen.

Commissioner Lorinda Wichman made the motion to pass the budget and added the sheriff’s department would be required to use zero-based budgeting, which would require commission approval on individual spending items.

“When I reach in my pocket when I’m in the store and I don’t have enough money for that bottle of liquor I don’t buy it,” Wichman said.

Nye County already won’t fill five deputy positions and a training officer for the emergency medical services, saving $633,000. Assistant Sheriff Rick Marshall said there’s two open deputy positions in Tonopah, one in Beatty and another in Pahrump. He warned the county agreed to have a minimal amount of officers as a condition of accepting a Community Oriented Policing (COPs) grant that funded five positions.

County Manager Pam Webster blamed a state law that doesn’t allow property taxes to increase more than 3 percent per year for the slow growth of county property tax revenues, which are still recovering from the Great Recession.

A state legislative committee is working on adjusting that law now, Webster said, which was enacted during the real estate bubble to prevent big hikes in appraised values and property taxes. The abatements — the difference in what the county could collect with what it actually collects — doubled from $4.5 million to $9 million in the past year, she said.

Ad valorem property taxes are projected to raise $11.38 million, about equal to this year and up from $9.9 million last year, but down from $14.6 million in 2009-2010. Consolidated taxes, which is mostly sales tax, are projected to raise slightly more this coming year, $11.9 million, and Payment in Lieu of Taxes from the federal government will raise another $2.17 million, but the net proceeds of mining fell from $2.9 million to $840,000. That came after a state law where future projections on net proceeds are used, instead of past collections.

Despite the fewer positions, salaries stay about the same at $16.7 million, while benefits rose from $8.8 million to $9.9 million due to medical benefits. Schinhofen blamed it on Obamacare, Webster said the county claims history was also to blame.

The budget leaves $65,000 for veterans services intact, though Webster said the county no longer has a veterans service office; it is provided by the state. It also includes the current tax rate for the University of Nevada, Reno Cooperative Extension Service of 1.5 cents per $100 of valuation, while the state only requires a minimum of 1 cent.

Wichman was concerned about a cut of $180,000 from the natural resources contracts, leaving only $20,000 for miscellaneous contractors. A contingency fund was reduced to $100,000. A facilities manager position, last held by commission candidate Bob Jones, will be left vacant. Wichman persuaded the board to reinstitute $20,000 for fees to the Nevada Association of Counties, where she is president.

“If Nye County doesn’t protect and hang onto its natural resources you’ll watch every other form of revenue go in the tank,” Wichman said. “They have offered to help us with all that natural resources stuff, they’re doing our lobbying now at the state since we don’t have a lobbyist.”

Schinhofen said he’d like the county to have a stabilization fund; Webster said that could be used with net proceeds of mining, which have a high variability.

The former facilities manager Jones asked about $3.6 million listed for miscellaneous overhead. Webster said that’s for the outside auditor, retiree medical benefits and other legal fees. District Attorney Brian Kunzi said it includes $750,000 in assessments by the state for services the state formerly provided.

Sheriff Tony DeMeo said he had instituted a cite and release policy for some offenses in 2004 that could be reintroduced for some crimes, like trespassing violators, who wouldn’t be booked into the new Pahrump jail, suggesting shoplifters could be added to the list.

“Every time we book somebody in that facility is a direct impact on the budget of the Nye County Sheriff’s Office,” DeMeo said.