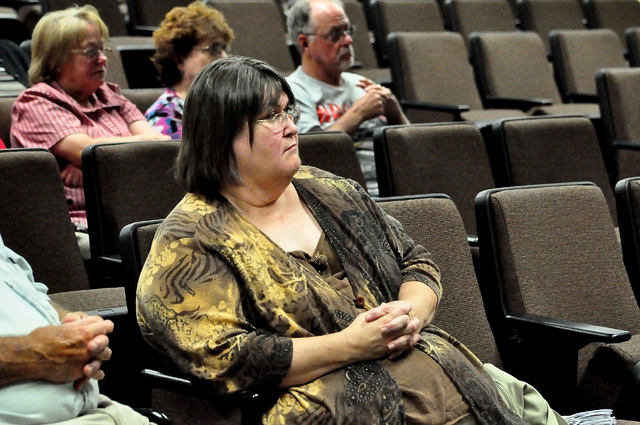 Over 270 lots in the Calvada Valley Unit No. 5 area were proposed for a zone change. Several dozen residents tried to persuade the RPC to change zoning from rural to suburban estates which would put restrictions on owners of livestock in the area.

The proposal was brought up by a series of complaints that area residents made against Lynette Sandquist, who has 10 dogs and a number of livestock on her property. Officials previously tabled the proposed rezoning to review the deed of restrictions.

Many lots have equestrian trail easements along the rear of the lots.

Sandquist however doesn’t have horses on her property. In her emotional address to the RPC, Sandquist said she was “not the problem.” Sandquist’s father and sister also spoke in her defense.

“It’s not filthy and my animals aren’t doing anything,” she said.

Separately, John Mazlo, the owner of Mazlo Transport Company who lives in the area spoke against the proposal.

“If this would even be considered, it’s absurd,” he said. “I came here from Las Vegas to have animals, and to be left alone, to park an old pickup truck in the backyard, whatever have you. Now this is up for mention because of one property, one sour grape. Somebody’s upset, the whole neighborhood who has nothing better to do is down here now.”

Petitioners Judy and John Fesnock, two of the dozen supporters of the petition who came to the meeting presented a letter signed by a group of their neighbors.

“This was done without any consideration as of to how this affects the quality of life of the neighbors with respect to the odors, noise level and insect population,” the letter said about Sandquist having many animals.

Judy Fesnock said that the change could provide “a happy medium” between those who want a rural atmosphere without livestock and those who choose to live in a farm setting. She said the request was not about an individual.

“We are not looking to change the entire subdivision or even the whole of Unit 5. We are asking for those lots between Calvada Boulevard south to Indole (Street) and from Winchester east to Platense (Street),” the letter further said.

Members of the RPC were however less receptive to the idea. Some proposed limiting certain types of animals on one acre lots, others said that the issues should be left to Nye County commissioners.

RPC Vice Chairman Gregory Hafen II said he was against a blanket zone change in the area.

“If a group of individuals of 20,30,50 (people) all want to get together and file an application with the Zoning Department, pay the appropriate fees and get a zone change, I would be glad to consider that. I am not going to do a blanket one and take someone’s right to keep their animals,” he said.