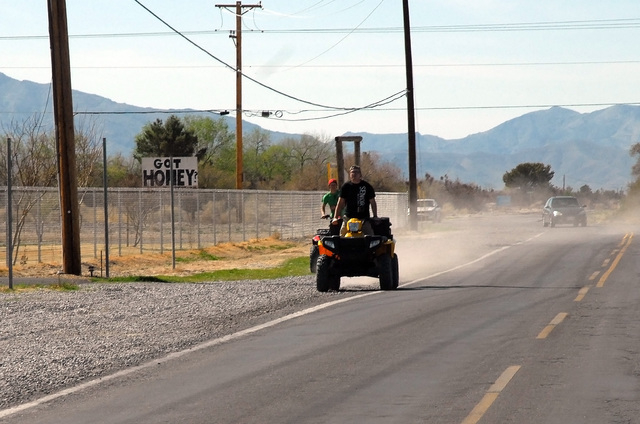 Signage for off-highway vehicles could soon pop up across Nye County roadways as members of the Pahrump Regional Transportation Commission are mulling ideas for regulation of OHVs.

The suggestion was brought up by former Pahrump Town Board member Bob Adams at several recent RTC meetings. Adams said that installing informational signs that would inform riders about food, fuel and lodging could also bring tourism dollars to Nye County.

“The signage that we want here primarily is to promote tourism,” Adams said. “That where somebody that’s come to Nye County, whether it’s from Clark (County), or whether it’s from California, that would feel comfortable out riding their OHV to say, Best Western, or to any of the Golden Gaming properties. Basically, any restaurant in town.”

Riders also can cross interstate highways to reach their destination, which proved to be problematic, officials said.

“Now we have to look at the other towns, especially Pahrump, because people are driving where they shouldn’t be driving,” RTC member John Koenig said.

“People are just not following it,” Koenig said.

While the speed limit requirements are in place, dirt roads in most parts of Nye County still lack signage, officials said.

Adams said OHV tourism brought money to places elsewhere, such as in Utah. Marysvale, a rural community in central Utah is in the center of the Paiute Trail System for OHVs.

“Following the example of Marysvale and other Utah communities, we can attract OHV tourists by making them feel welcome,” Adams said.

Adams said that much of the issue is OHVs being ridden on the dirt on the sides of State Route 372 in Pahrump. Riding an OHV on state highways requires NDOT authorization for small OHVs that include motorcycles and quads.

Adams said he will continue to work on OHV signage off of NRS 490 with the RTC. He said he wants OHV riders from other areas to feel comfortable riding their vehicles down designated OHV routes in Nye County.

“Caliente in Lincoln County has brought in a lot of money with the Silver State Trail system,” he said. “We can do the same thing here in Nye County and actually, we’ve got Esmeralda (County) on board, we’ve got Mineral County that we are talking about putting the trail system that would be going from Pahrump all the way up into Hawthorne (and) from Hawthorne into Yerington.”