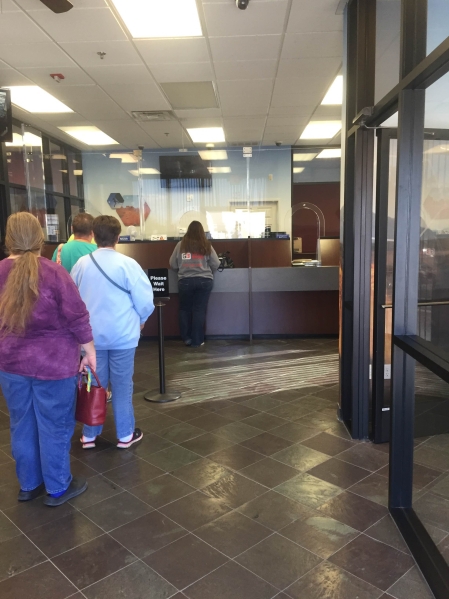 The One Nevada Credit Union, located at 280 South Highway 160, Suite 2-3, closed it doors for good on Thursday, leaving residents with one less banking option in the valley.The company attributed the branch shutting down to declining branch usage.

Although the local branch will cease in-person operations, they explained that customers can still resume banking operations with One Nevada via Internet.

“About 70 percent of our members don’t even mention a branch these days,” said Greg Barnes, One Nevada Credit Union senior vice president of marketing. “Most of our membership has transitioned to using their smartphone, or their tablet to do the majority of their transactions.

“People just don’t come to branches like they used to. The business at that location has declined to where it’s not sustainable to keep it open.”

Customers utilizing the branch during its final day had mixed reactions to One Nevada leaving town.

Some had reactions like, “It’s annoying,” and they were ready to move on and switch banks.

“I’m going in to close my account because I’m not going to Vegas for it,” said one customer who identified herself as Jan. “I’ve been with this bank for years and the closing caught me by surprise a bit. I waited until the last day to see if they will have an ATM in town that would be able to accept deposits and they still don’t know.”

While others were still going to bank with One Nevada, making the trip over the hump when needed to conduct their business at one of the company’s 15 branches in Las Vegas. The closest branch location is 53 miles away from the intersection of Highway 160 and Highway 372 at 4840 Blue Diamond Road.

“I’m going to hang in there and make deposits at the ATM, I only deposit cash anyway,” said Greg, a tow truck driver who has banked with One Nevada for two years. “I’ll make the trip to Vegas about once a month because I’m 24/7, so it’s hard for me to get out of town.”

One Nevada customers can conduct business via ATM machines in Pahrump through four surcharge-free units available through the Allpoint Network. The main ATM in the parking lot of the former branch will remain and deposits can be made at that location, according to Barnes.

Barnes said closures are something that will become increasingly more frequent, as technology is making it easier for anyone to conduct all their banking needs from home.

“We are always re-evaluating our branch options,” Barnes said. “What we see in the future with the banking industry as a whole is a lot of consolidation, a lot of branch closings … again because the people are doing the majority of their transactions online.”

All employees at the branch were offered positions within the company, and of the six that worked at the branch, three decided to continue working with the company in Las Vegas and the other three secured other employment in town.

If any current One Nevada Credit Union customers have any questions about the closure, give the company a call at 800-383-3000.