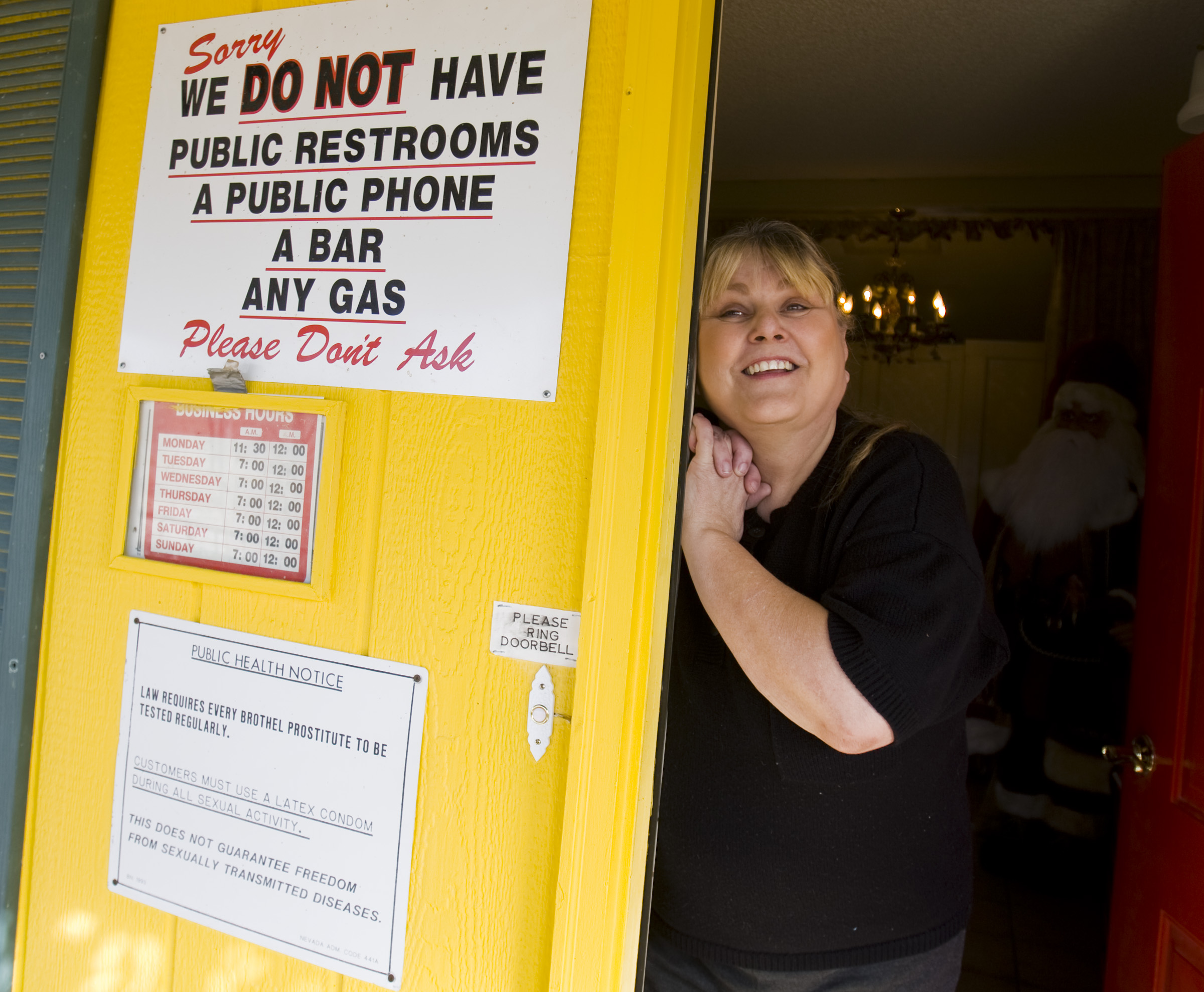 RJ FILE*** JEFF SCHEID/LAS VEGAS REVIEW-JOURNAL Bobbi Davis, who owns and operates the Shady Lady Ranch brothel, located about 2 1/2 hours north of Las Vegas, with her husband stands at the front door of the brothel on Thursday, Dec. 23, 2009. The brothel is planning to hire men next month to service women costumers. 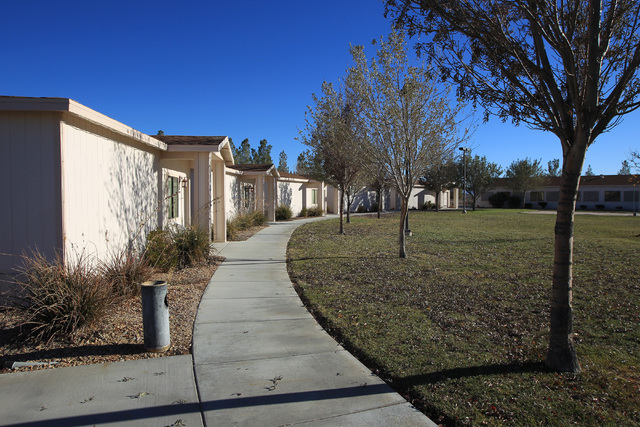 For about the same price as five days in Jamaica, a week in Cancun or two weeks in Acapulco, you can spend three memorable nights at a resort just outside Pahrump that brings a whole new meaning to the phrase “all-inclusive.”

For $2,100, you get transportation from Las Vegas, a two-night stay at the property’s hotel, dinner with the “Sheri’s lady of your choice,” a souvenir from the gift shop, and a $2,000 voucher good for some of the establishment’s other, ahem, services. The $3,200 package includes all of the above plus an extra night at the hotel, an upgraded dinner of steak and lobster inside a themed bungalow, champagne and an open bar, and a “guaranteed sex ticket” worth $3,000.

The brothel is marketing the vacation packages as a “legal, safe and STD-free” alternative to sexual retreats overseas. Owner Chuck Lee said Sheri’s is already a “trusted, internationally respected adult brand” and “a leading sex destination in the United States.”

The move toward a new, upscale market comes at what could be a make-or-break moment for a struggling industry that has long catered mostly to truckers and transient miners in the dark parlors of ramshackle houses.

Aside from a handful of large operations, he said, times are tough for the state’s most controversial industry. Flint said the state’s licensed brothels have been decimated by a combination of factors including high gas prices, the Great Recession, the rise of the Internet and an unfettered illegal sex trade in Clark County, one of five Nevada counties where brothels are outlawed.

There are half as many bordellos open today as there were 20 years ago, and Flint expects that downward trend to continue.

“The brothel industry is about as badly bent as I’ve ever seen it,” said the octogenarian, who first started lobbying more than 50 years ago on behalf of wedding chapels like the one he owns in Reno. “I don’t know that the industry as we know it is going to survive.”

The latest victim is the Shady Lady.

She and her husband started the brothel in 1992 along a lonely stretch of U.S. Highway 95 in Nye County, about 150 miles northwest of Las Vegas.

“When I came here I thought, ‘Wow, a state that really allows you to do this,’ ” Davis recently told the Pahrump Valley Times. “But it’s not the same. They treat you like the worst stepchild.”

She later made international news when she briefly employed a male prostitute in an effort to draw women — and attention — to the Shady Lady.

Davis said she began to lose interest in the business after her husband died two years ago. She told the Pahrump newspaper she plans to retire in Texas to care for her ailing parents.

Hers will be the second brothel in six months and the third in two years to close in Nye County.

“There’s no business that far from Vegas, and there’s very little business on that highway,” he said. “The little country brothels are really having a hard time. They’re just not making it selling sex.”

Sheri’s Ranch is one of them.

Since Chuck Lee bought the brothel and the 310 acres surrounding it in 2001, he has said he has poured an estimated $20 million into the property, adding seven standard hotel rooms and three themed suites, a swimming pool, sports bar and restaurant, among other amenities. In 2012, the brothel opened six fantasy bungalows called “Sheri’s Playland” and introduced other new services, resulting in a significant increase in business at a time when other, smaller brothels are withering on the vine.

Barb Brents is a University of Nevada, Las Vegas sociology professor who has studied and written about Nevada’s legal brothel industry for more than a decade. She said in an email that “absolutely yes the industry does need saving,” though she’s not as pessimistic about its future as Flint is.

“I doubt that the industry is on its deathbed, but the business model needs to reflect changing trends in sexual commerce,” Brents said. “The U.S. is behind the curve globally in exploring models other than criminalization, and Nevada is actually a forerunner in this regard. It is a workable model that needs to be expanded, not contracted.”

Flint doesn’t represent Sheri’s Ranch, but he said he is impressed by what Lee has built there. In a business often associated with remote collections of rundown trailers, Sheri’s has developed into a place capable of attracting sex tourists from across the country and around the world.

It might even mark the beginning of a new trend in the brothel business — something akin to the rise of the megaresort on Las Vegas Boulevard — in which small, far-flung operations like the Shady Lady give way to opulent brothel resorts clustered as close to Las Vegas as the law will allow.

Or it could be just another gimmick — one good enough to sustain a place like Sheri’s Ranch but not enough to change the fortunes of a fading industry destined for extinction.

Either way, Flint said, “I think you’re going to see more of this sort of thing.”