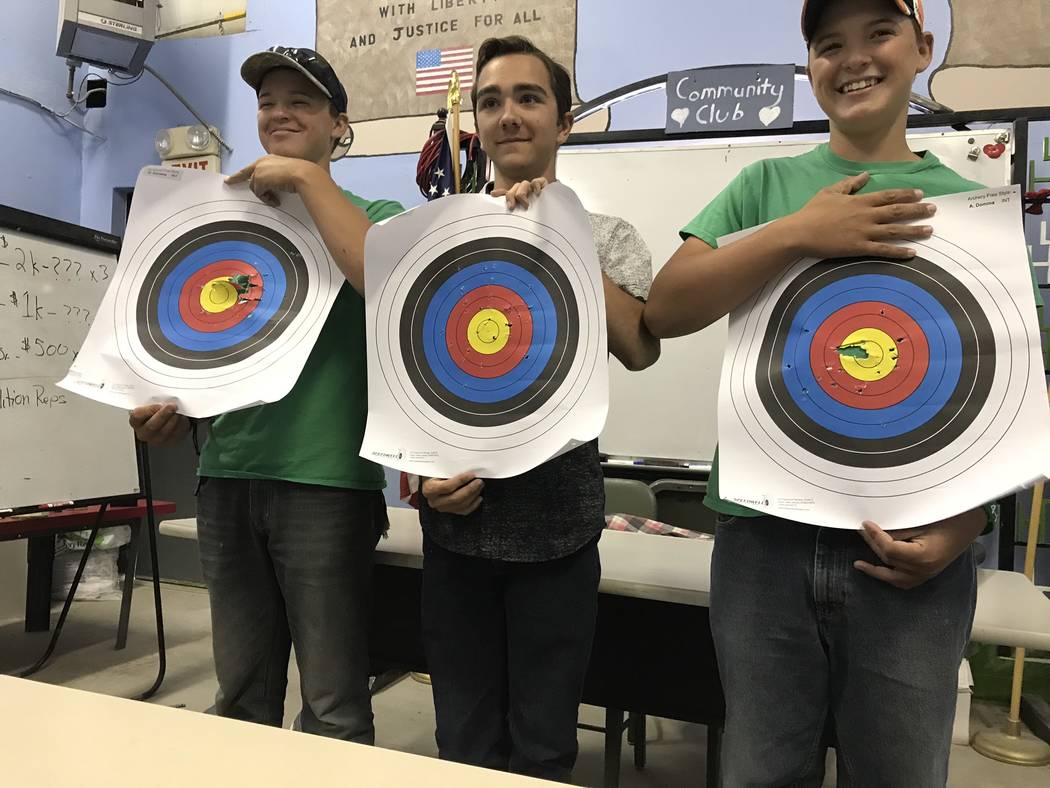 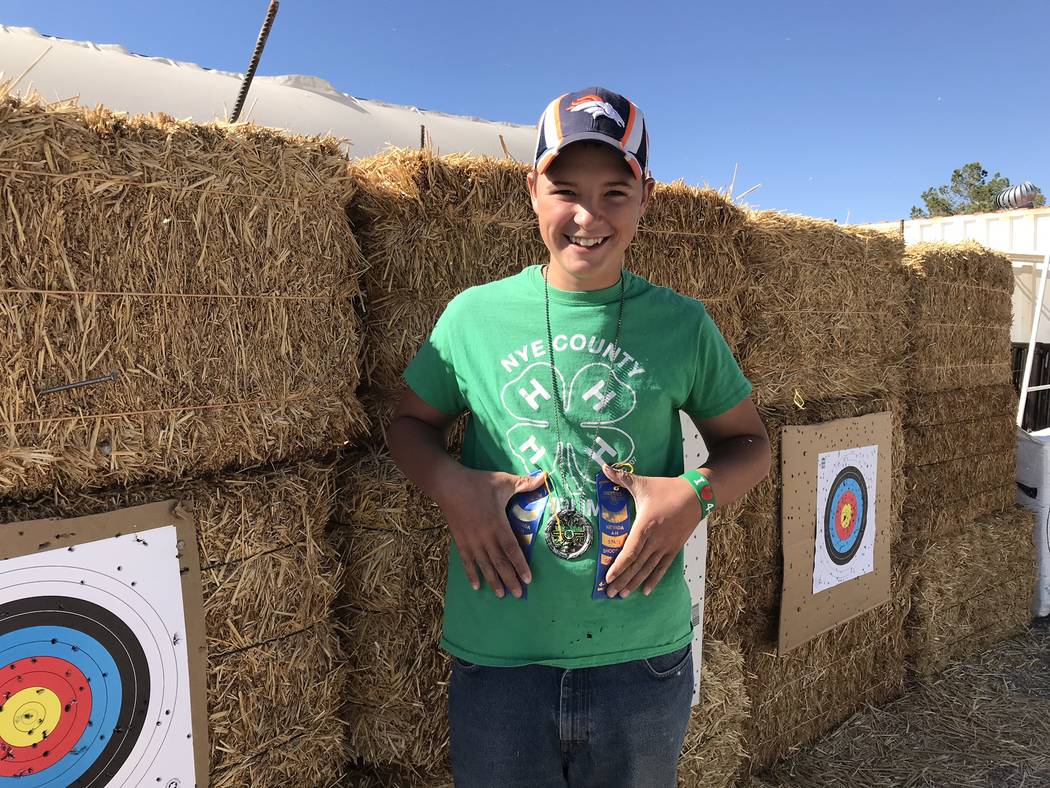 Jeffrey Meehan/Pahrump Valley Times Augustes Domina holds his two blue ribbons from the 2018 Nevada State 4-H Shooting Sports Match; he was also wearing his silver medal for his second-place win in the archery freestyle category, intermediate division. The event was held on Sept. 28-29 at the Clark County Shooting Complex. 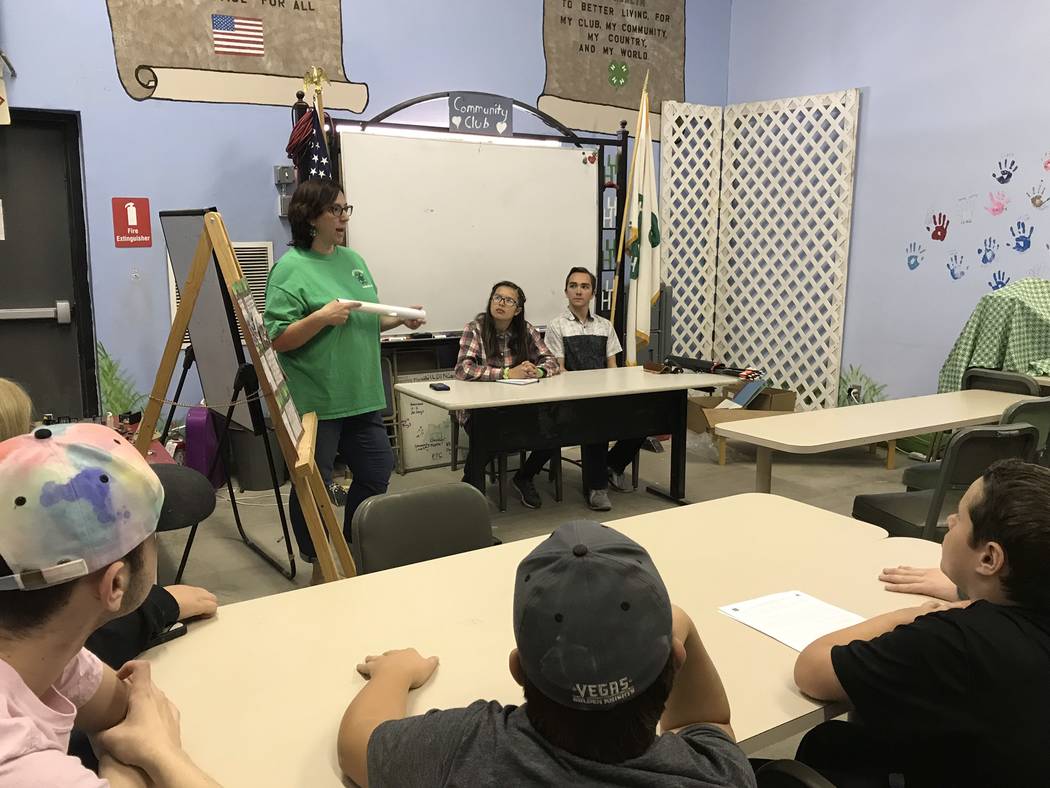 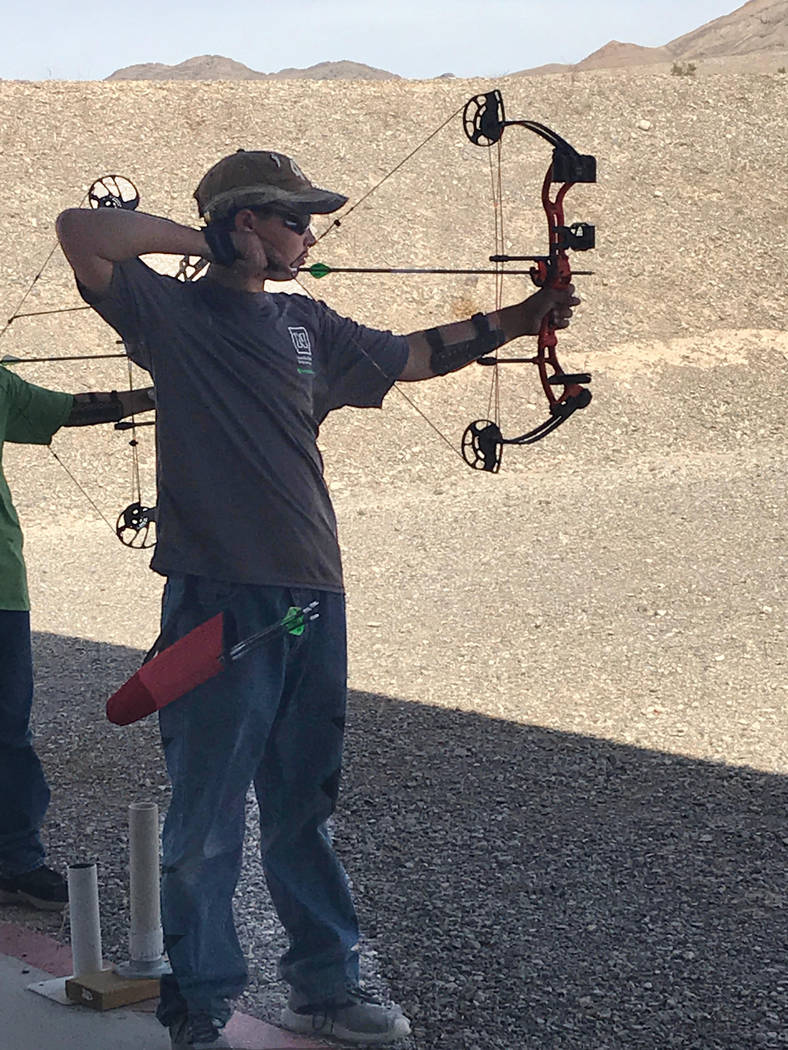 Special to the Pahrump Valley Times Augustes Domina lines up his shot at the target range at Pahrump 4-H's Annex building at 1651 E. Calvada Blvd.

The group works throughout the year practicing in preparation for the annual event, Fronk explained.

Fronk, of Pahrump 4-H’s shooting club placed 6th out of 14 competitors in the senior (ages 14-19) division in the archery freestyle category.

Fronk also earned a blue ribbon, which will allow him to compete at the national level in 2019. He earned the ribbon by meeting the minimum point requirement in his discipline and age class.

That garnered Augustes a silver medal second-place ranking against 26 other competitors from across the state in that category; he also took 12th place in the intermediate division (ages 11-13) for the shotgun category as well.

He earned two blue ribbons for his success and also moves on to the nationals.

In a group interview with Fronk, Garrette and Gus, the three said they each practice roughly between 15 and 20 hours a week to prepare for the annual competition, which they do on site at the 4-H’s building on Calvada Boulevard and at home.

To qualify for entering the state-level competitions, each of them had to qualify at the county level first, which is different at each age category: juniors, intermediate and seniors.

The county meeting was held at the Clark County Shooting Range on Aug. 25, where a blue-ribbon win was required to move on to the state level.

Three club members from the Pahrump 4-H’s shooting club achieved red ribbons during the county-level competition: Mikayla Delarosa, Tanith Grace and Landon Ingersoll. They did not move on to the state level, however.

Fronk said he is looking forward to the national competition.

The national event will be held in June 2019 in Grand Island, Nebraska at the Heartland Public Shooting Park.

Stormy Ingersoll, 4-H coordinator for the Southern Nye County division, said they “decided to really go for it this year (the state competition) because it was in Las Vegas; because it’s anywhere in the state, you never know where it’s going to be.”

The club is open to any 4-H member in the local club. Equipment is also available to use for those who don’t have their own crossbow available.

“It’s very popular,” Ingersoll said. “It’s great because it’s an expensive hobby, but yet we have the stuff.”

Ingersoll said they’ve gotten some grants for equipment and been able to buy some equipment from what’s known as the National Archery in the Schools Program.