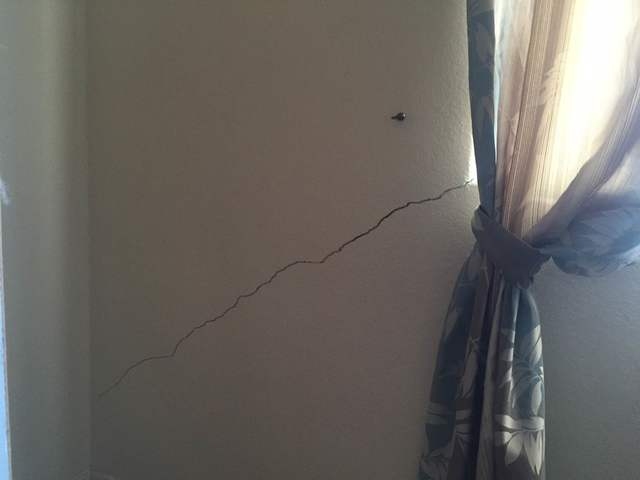 After buying a dream home and expecting to live in the residence for the rest of one’s life, the last thing they’d expect to worry about are defects.

One Pahrump neighborhood is dealing with just that, as they have found their homes not being all they were cracked up to be.

According to a lawsuit filed in 2012, 43 homes in the Richland Estates community started to develop cracks through various parts of their homes in 2011. Those small cracks progressed and in some cases the cracks now run the entire length of walls and one home has the owner living in fear that her roof is going to collapse on her.

Instead of being the dream homes they had hoped they purchased, the residences have turned into nightmares for the homeowners involved in the case as the lawsuit continues to make its way through the courts.

John Erbe and his wife are spearheading the legal pursuit for the group of homeowners and they have gotten few answers in the almost four years of litigation.

The situation began when Meads was contacted in 2011 and informed of the faults and did nothing to resolve the issues, according to Erbe. According Erbe and the lawsuit, homes were built on bad soil and the homeowners are claiming that the builder, Double M Construction Inc., headed by Russ Meads, didn’t have the adequate insurance when they constructed the partially-built community, according to Erbe.

“I can’t tell you how many times I tried to contact him and all he responded with was with a couple of drawings of the house,” Erbe said.

When questioned by Erbe for the permits, inspection records, soil testing and bonding for his home, Meads didn’t produce those documents, according to Erbe.

The homeowners are seeking recovery for damages to their homes, and as the case goes on, lawyers are advising them not to fix anything in their homes as that could negate any settlement they may receive.

Their civil suit alleges that homeowners have suffered injuries due to the defects, that there is a stigma related to owning a defective home, which diminished the value of their homes, lost rents for some that were leasing their properties out, and that the properties have sustained personal property damage as a result of corrosive soils.

The court documents state that the homeowners discovered defects and damages within the period of applicable statutes of limitation and is the result of differential soil movement and defective slab systems. These defects resulted in the cracking of the foundation slabs, cracking and separation on interior wallboard and ceilings, exterior stucco cracking, cracking and separation of concrete driveways, separation of block walls and more, due to poor workmanship.

The homes were insured and had warranties on them, and Erbe said that a reason was given to why the homes have not been repaired yet.

“They said that we were not covered because the ‘earth moved,’” he said.

The suit claims that Double M Construction was aware of the possible issues that might arise from building on the site, and built them not in accordance of applicable law, but built them anyway to increase the company’s profits at the expense of the homeowners.

With all the fuss in town over water rights and wells, Erbe thought his neighborhood would be the future of Pahrump, as the homes include water and sewage, so they don’t deal with wells and septic tanks.

In addition to the damage in homes, with the subdivision not being fully completed, as only 44 of the planned 473 homes were built due to the economic downturn, the roads are not maintained by the town, so the homeowners are responsible to fix any issues with their streets. They are also showing damage due to the bad soil in the area.

All homeowners involved in the civil case are seeking damages for cost of any repairs already made, future repairs, temporary housing necessary to repair any defects, loss of value on their property, legal fees and expert fees, in addition to any interest provided by the statute.

Despite his personal bankruptcy filing, Meads has now been linked with construction at two different sites in town and it has those involved in the civil suit crying foul.

Meads is listed as a consultant for the Spring Mountain Motor Sports Ranch, which has big plans to add retail stores, a movie theater and hotel that will be available to the community, unlike the racetrack that is only open to its members.

The lead attorney for the plaintiffs in the case, James Carraway, said there is a perceived conflict of interest with Judge Wanker, as she has ties to Spring Mountain Motor Resort and Country Club.

“Here’s the main defendant, who’s listed in the newspaper and in the magazine articles being the main public consultant at the racetrack (Spring Mountain Motor Resort) and this judge has never disclosed to us her involvement in the racetrack.”

In her 2013 judicial profile in Nevada Lawyer magazine, which is linked to the State Bar of Nevada website, Judge Kimberly Wanker is listed as a member of Spring Mountain Motor Resort. It is unclear if she is still a present-day member and nothing suggests that her perceived role with the motor ranch has caused any lean in judgment either way during this case.

In addition, Double M Construction is listed as the builder for the Cottage Grove Estates community.

Wanker said in open court that the plaintiffs should just bulldoze their homes and start over and has been reluctant to set a trial date stating she said she is overwhelmed with criminal cases and has now summoned the help of a special master. A special master is an authority that is appointed by a court to carry out some sort of action on its behalf, mainly to ensure judicial order is followed.

By law a judge must set a trial within five years of the filing of a construction defect lawsuit, which in this case will be in August 2017.

Meads was reached for comment, but he declined, citing pending litigation.