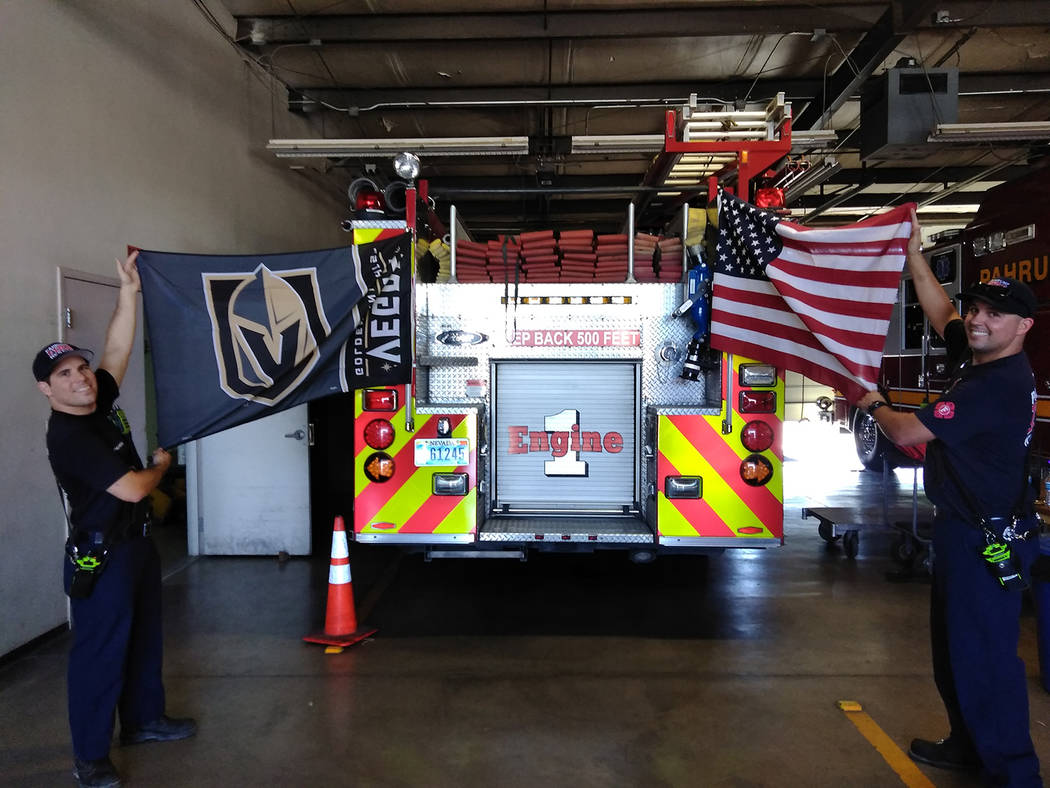 Selwyn Harris/Pahrump Valley Times Pahrump Valley Fire and Rescue Services crew members Matt Garcia, left and Billy Kehoe, right, display the American and Las Vegas Golden Knights flags from the rear of the department's Engine One. Earlier this year, Garcia placed a bet on the team to win the Stanley Cup this year. The Knights won game one of the finals on Monday in Las Vegas.

It’s long been known that members of Pahrump’s first responders are prepared for just about anything that comes their way.

So it should come as no surprise that a crew member of Pahrump Valley Fire and Rescue Services had the presence of mind to place a bet on the Las Vegas Golden Knights to win the Stanley Cup Finals as a first-year expansion team.

Fireman/paramedic Matt Garcia said he’s been a lifelong NHL hockey fan, from his father’s side of his family.

As a result, Garcia casually placed a wager with a local sportsbook late last year with the hopes the team would take it all this year.

“I am originally from Las Vegas, born and raised,” he said on Tuesday of this week. “My dad’s side of the family is from Buffalo, New York, so we were big Buffalo Sabre fans. As a young kid, I played hockey for several years. The fact that we now have a Southern Nevada NHL team now, has just been great.”

Just prior to the start of the NHL season last year, Garcia even purchased some Golden Knights schwag for his home and his fellow firefighters.

“I recently got the flag after we were given the OK to fly it off the back of Engine One,” he said. “I acquired it off Amazon and I think we’re all pretty happy about how it looks on the back of the vehicle. I have also been flying the Las Vegas Golden Knights flag in front of my house for the duration of the season. I never thought that we would be where we are right now. It’s really hard to describe the feeling that I have.”

Aside from placing the wager last year, Garcia also said he’s grateful the team is representing Las Vegas and Southern Nevada better than most experts expected.

So much so, Garcia attended Game 1 of the seven-game championship series against the Washington Capitals on Monday of this week.