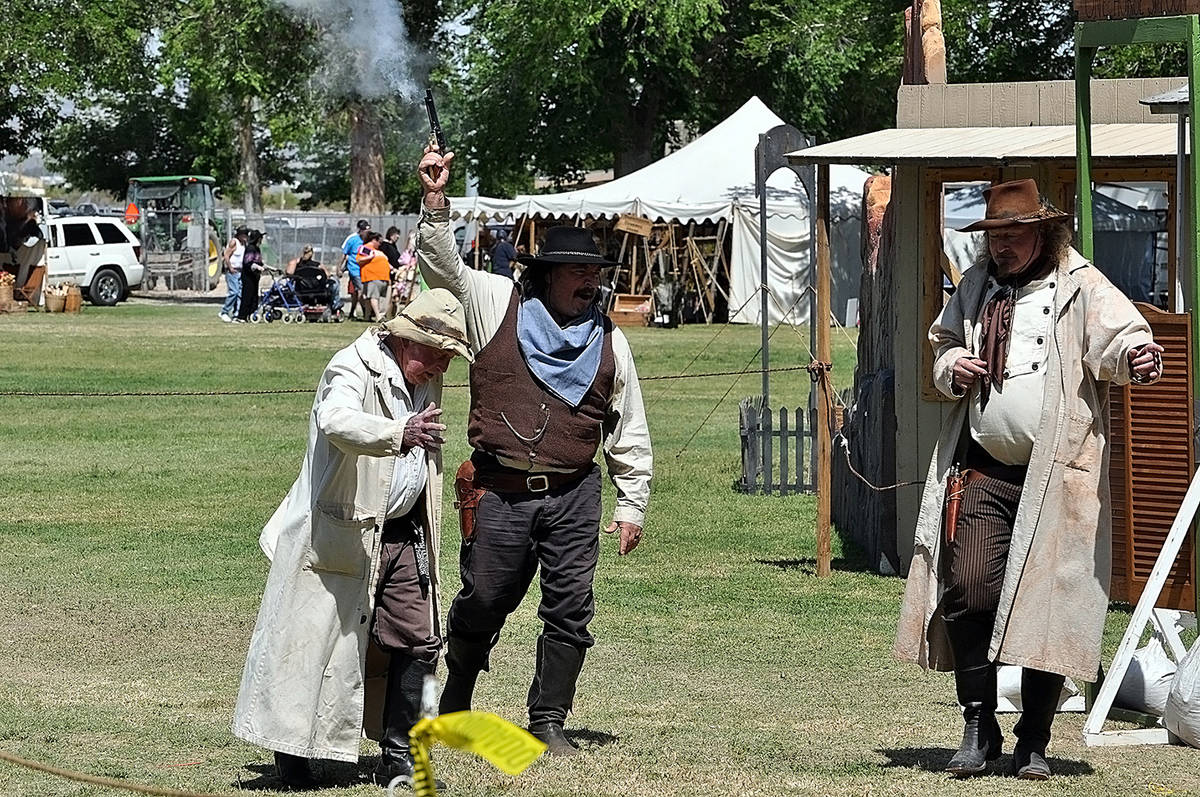 Horace Langford Jr./Pahrump Valley Times Due to the COVID-19 outbreak, the Pahrump Gunfighters were forced to cancel a show scheduled for Sunday, Nov. 22 at Dusty Flats. The group has always been a popular local fixture at both the Wild West Extravaganza and Bluegrass Festival in years past.

However, a planned show scheduled on Sunday, Nov. 22 has been canceled, according to gunfighter Arlene Delgado, whose stage name is Annebelle.

“Sadly, due to the COVID-19 restrictions, it just would not have been feasible for us to do this show,” Delgado lamented. “If all of the gunfighters were to wear a mask, then they are all bad guys and that’s not going to work. We do skits, and we do shows about the Old West and what we thought might have gone on back then. We always do a bank robbery, and there’s just a lot of fun and laughs. We thought it would be good for the community if people came out and just relaxed and enjoy a free show.”

Aside from the humorous and jocular shows and skits, Delgado said the gunfighters also provide valuable lessons to local youth in regard to firearms.

“We always teach gun safety,” she said. “The first thing in our show is always gun safety for the children, and it’s amazing that they actually remember. We have seen children in Walmart telling their parents don’t pick up a gun and that is actually what they told us, so that is always kind of heartwarming.”

Although the gunfighting troupe is roughly 15 members strong at present, Delgado said they are always looking for additional members to join.

“Especially younger ones,” she noted. “In February when we have the Pahrump Valley Days, we will be a big part of that, hopefully, but nobody really knows right now. Anyone can book us for parties, and we love to do shotgun weddings, because we are good at that. The Pahrump Gunfighters are a non-profit organization, and it’s all donations. The money that we get, we buy our ammo, and the rest of it goes to the community. We donate to various charities in town and people in need. During Christmastime, we usually adopt a family.”

On a final note, Delgado said the gunfighters have a performance early next month.

“On December 5th, we will be doing something at Fitness For 10 on Loop Road,” she said. “They are having some kind of a shindig and as of now, we will be there performing our regular skits and shows.”

To book the Pahrump Gunfighters for a special event, or have questions about joining the group, contact Gambler Dan at (775) 751-3458.