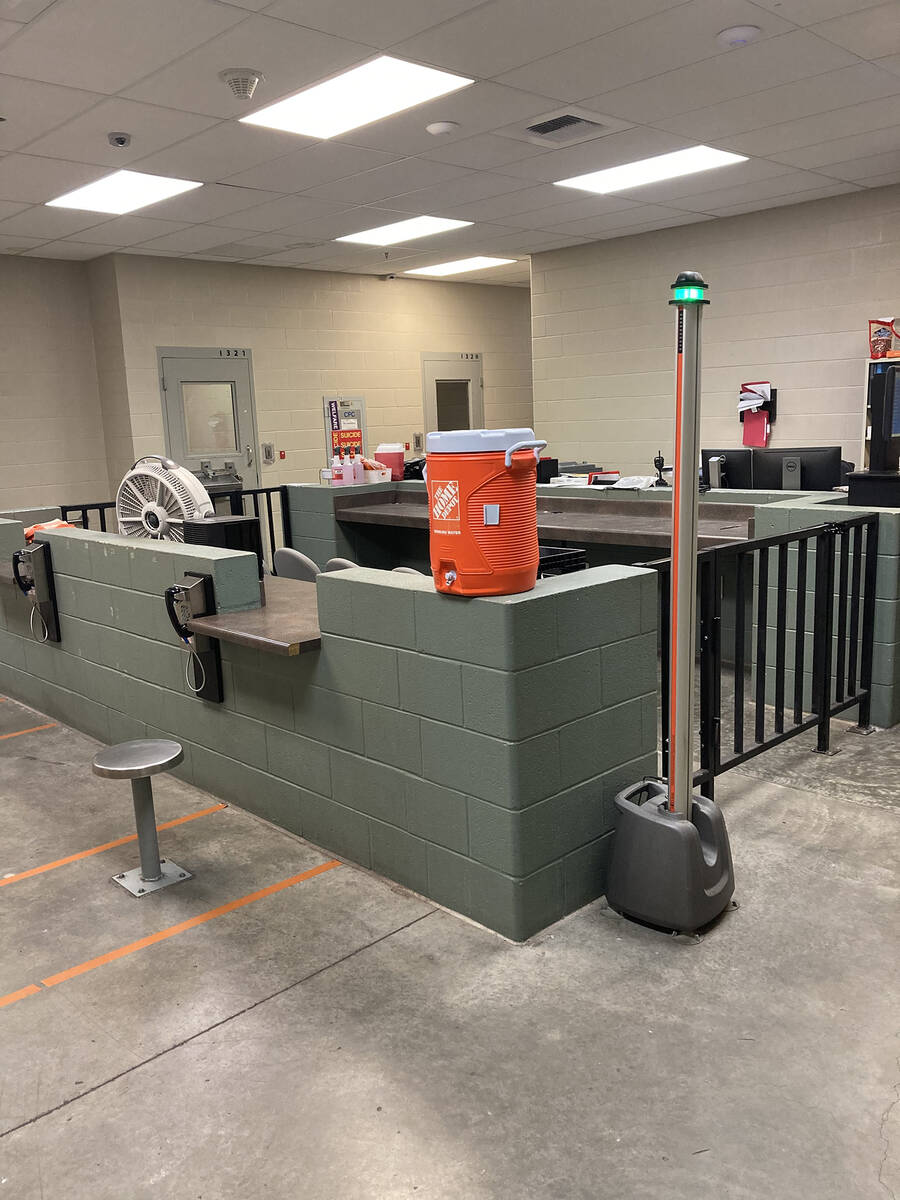 Nye County Sheriff's Office/Special to the Pahrump Valley Times This photo shows the existing booking area inside of the Nye County Detention Center in Pahrump, which is set for remodeling to provide a raised block structure with security windows to allow sheriff's staff to safely interact with inmates. The renovation project also calls for existing cells to be upgraded to padded cells. 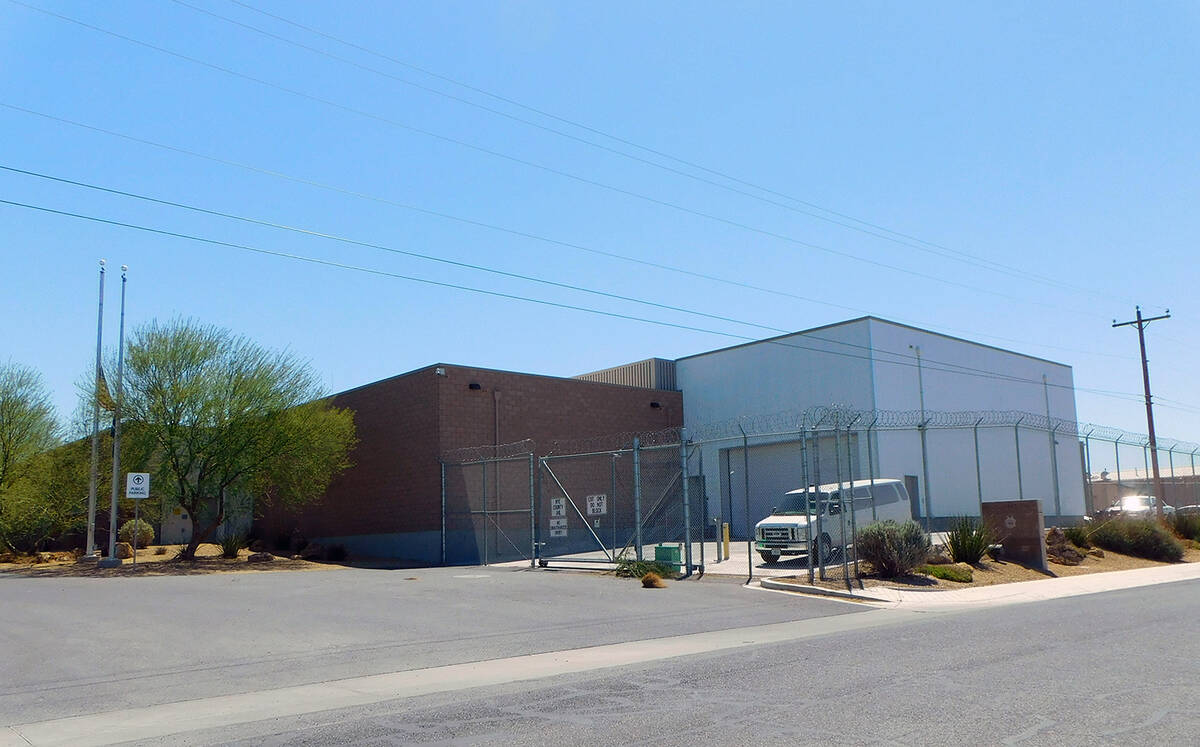 Robin Hebrock/Pahrump Valley Times The Nye County Detention Center in Pahrump will be remodeled to provide a new, improved booking facility as well as padded cells, for the safety of both inmates and staff.

The cost of the renovation project is $649,735, which includes the remodeling of the existing booking area inside of the Pahrump jail, as well as the addition of safety padding to two cells and the installation of bathroom facilities inside those cells.

The construction contract was originally before the board for awarding at its Aug. 3 meeting but it was delayed due to the decision to rebid. At that meeting, Nye County Commissioner Bruce Jabbour asked for some explanation as to why the padded cells are necessary.

Nye County Sheriff’s Captain David Boruchowitz said these types of cells would be utilized in the event that an inmate was experiencing some sort of mental crisis. “Which unfortunately, as you all are aware, seems to be a more regular occurrence… When we have inmates who are in crisis and are self-harming or trying to self-harm, we use the padded cells to ensure they that are not able to do so. We have one in the Tonopah facility but we don’t have one here and we’ve had several instances in the past,” Boruchowitz had replied, adding as an example, “We had an inmate who cracked his skull open, literally split open.”

He said the addition of what is termed a “drain flush” allows those confined to a padded cell to perform their bodily functions without having to be removed to a bathroom, where they could endanger themselves further. “The padded cells are a necessity, liability-wise, for the protection of these inmates as well as the protection of our staff and to limit the hands-on exposure we have to inmates who are having a mental crisis,” he had emphasized.

Local resident Sam Jones had then asked the very pointed question as to why padded cells had not been included in the original buildout of the jail, which came at a cost of nearly $22 million to the county. Boruchowitz said he himself was not involved with the decision making at the time that project was undertaken and those who were intimately involved have since passed away, so it was not possible to discern why the padded cells were left out. Regardless, he said he felt it was something that absolutely needed to be constructed now.

In the end, the commissioners decided to go ahead and rebid the project due to the circumstances surrounding the bids that had been received. That notice requesting bids was reissued not long afterward and by Wednesday, Sept. 8 the item was back on the agenda for consideration.

Commissioner Leo Blundo opened the discussion on Sept. 8 by asking how the project would be fully funded. The original budget called for an expenditure of $400,000 but the bid they were considering that day was quite a bit higher at about $650,000. Of that amount, approximately $153,000 would be covered by grants but the remaining $495,000 was to be determined by Nye County Comptroller Savannah Rucker.

Rucker explained that her department had performed some legwork to locate Public Safety Sales Tax funds that could be used, remarking, “We have $153,534.77 from PSST, that is the quarter-cent increase in sales tax that goes toward the sheriff’s office and the fire department. This is specific to the sheriff’s office. Then we need to find $342,430.23 and this particular project… promotes social distancing for inmates as well as for the jail staff so it could be funded from ARPA (American Rescue Plan Act funding) and it also could be funded from the county capital fund.”

Blundo made the motion to award the contract to Top Rank Builders with $153,770 to be funded from the grants fund and the remainder to be funded at the determination of the comptroller. Commissioner Frank Carbone provided a second and the motion passed with all in favor.

As detailed in the proposal submitted by Top Rank Builders, the project will include the labor and materials to install two prison-grade toilets on cells #308 and #309 as well as two recessed sanitary floor drains, which will be flushable from the outside, on cells #304 and #305. The bathroom portion of the project came in at $182,630.

The interior booking facility remodel includes the demolition and removal of existing counters and all other accessory items and installation of gray block to create a platform upon which service windows can be constructed. The windows will be bullet-resistant and come with a speech box and transaction drawer. This part of the project came in at $313,720.

The padded cell construction includes the furnishing and installation of Gold Metal Safety Padding in two cells, #304 and #305, for a cost of $91,240.

An additional $62,145 was included in the bid for all relevant permits and fees.

Top Rank Builders will have 60 calendar days from the issuance of the notice to proceed in which to complete the project.