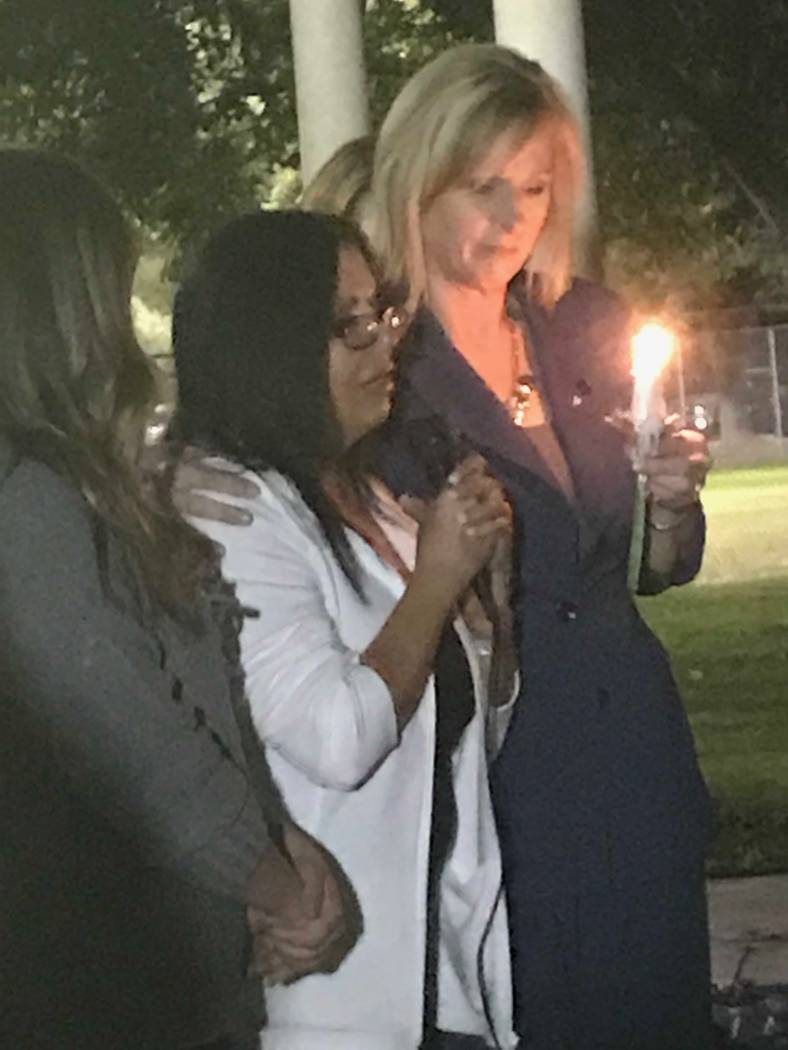 Jeffrey Meehan/Pahrump Valley Times Ronda Van Winkle of KPVM Television 46 (right) stands with Marla Desmoni (left) at a candlelight vigil at Ian Deutch Park on Oct. 6, 2017. Desmoni shared the story of her son, who was working security the night of the festival, and his efforts to bring many people to safety as shots were still being fired. 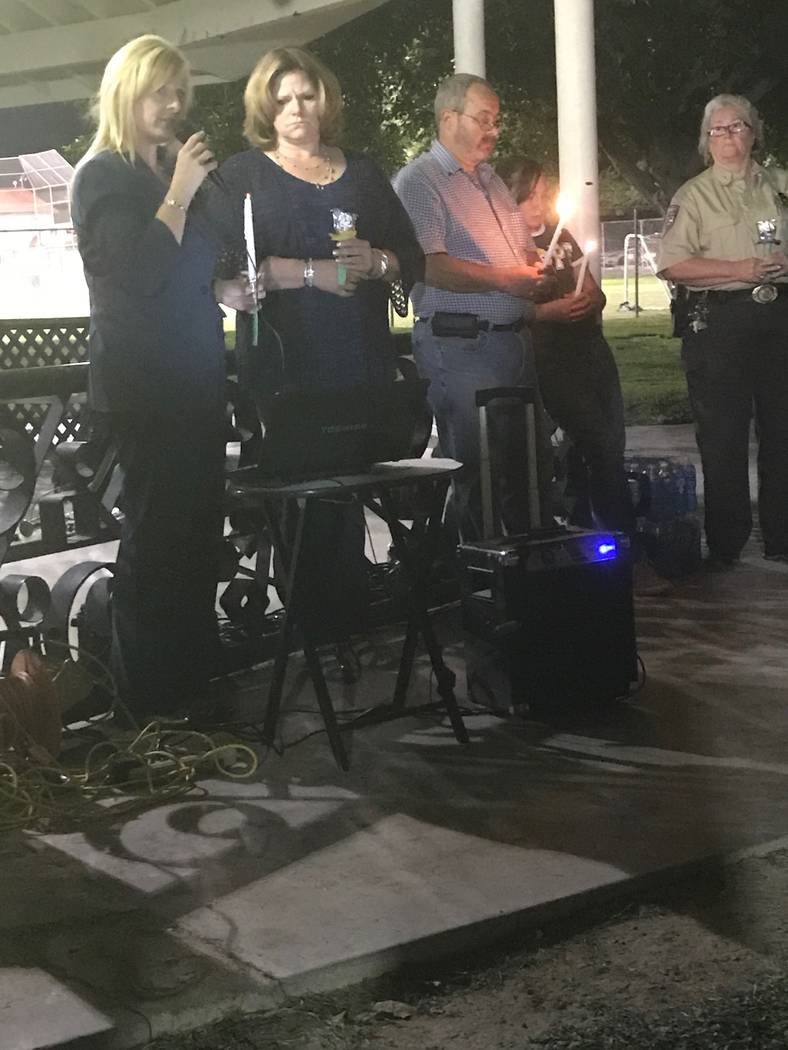 Jeffrey Meehan/Pahrump Valley Times Ronda Van Winkle of KPVM Television 46 (left) stands next to Deanna O' Donnell, KPVM, (center-left), Dan Schinhofen, Nye County Commission chairman, (center-right) and Nye County Sheriff Sharon Wehrly (right), during a candlelight vigil at Ian Deutch Park on Oct. 6, 2017. Several Pahrump residents joined this group, and others, to remember the loss of 58 people and the more than 500 injured during the mass shooting at the Route 91 Harvest Festival in Las Vegas on Oct. 1, 2017. 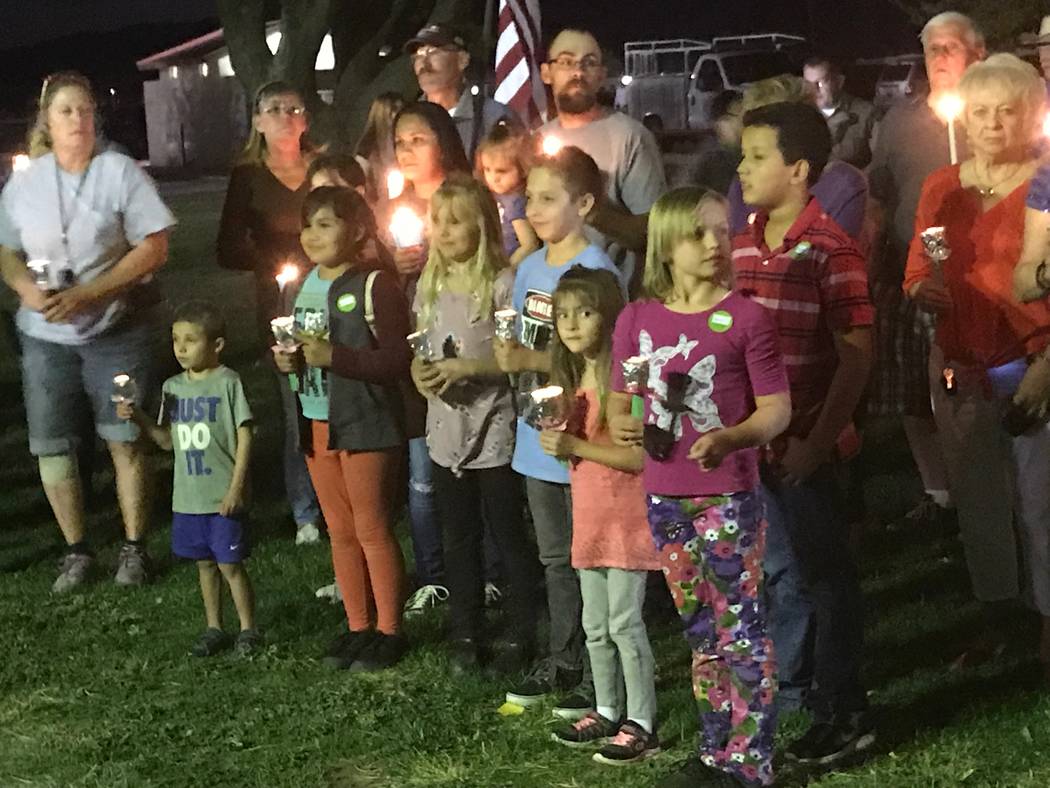 Jeffrey Meehan/Pahrump Valley Times Several Pahrump residents, including children, turned out for a candlelight vigil on Oct. 6, 2017 at Ian Deutch Park to remember the hundreds injured and the loss of 58 lives at the Route 91 Harvest Festival in Las Vegas, near Mandalay Bay. 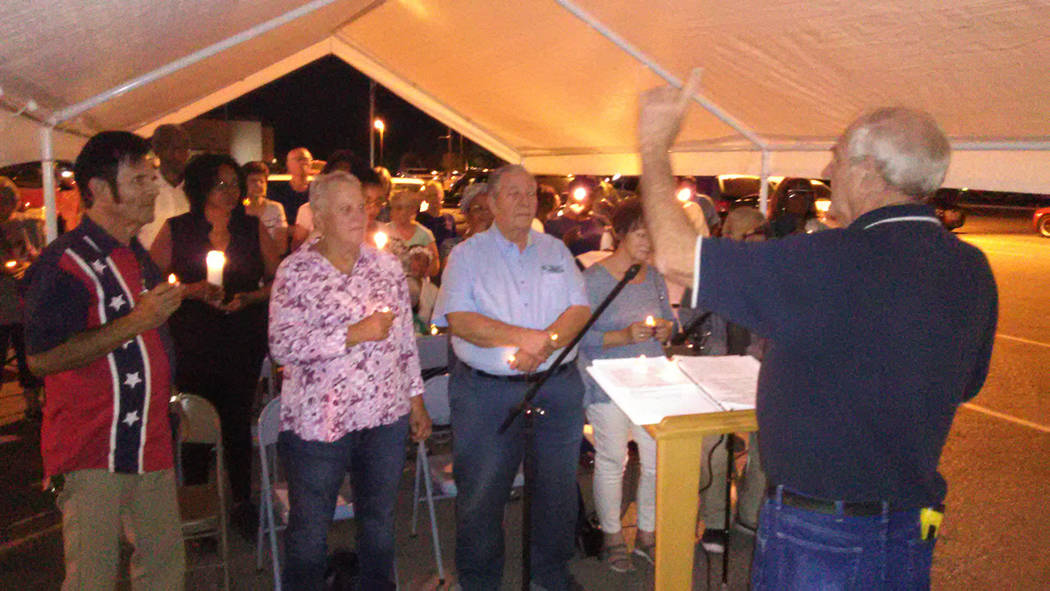 Dozens of area residents made their way to two candlelight vigils in Pahrump honoring the victims of the mass shooting in Las Vegas last week.

The first was at Ian Deutch Memorial Park on Friday, where members of the Nye County Commission, Nye County Sheriff’s Department, KPVM-TV Channel 46 and others led the 60-minute-long vigil, which got underway around 7 p.m. on Oct. 6.

More than three dozen citizens, including children, took part roughly five days after 58 people lost their lives and more than 500 were injured at the Route 91 Harvest Festival near Mandalay Bay hotel-casino on Oct. 1.

The gathering, which was not an official county gathering, was opened by a few words from the Fifth Judicial District Court Judge Robert Lane.

Several stories of heroism were spoken of by Ronda Van Winkle from KPVM.

Van Winkle spoke about her and her son’s past attendance at the festival as the yellow glow from the candlelight flickered.

Van Winkle said she attended the festival last year with her son, who lives in Las Vegas, and a group of his friends. Van Winkle’s son, who didn’t attend this year, drove toward the thousands of rounds of fire to pick up several of his friends and bring them to safety.

Van Winkle recounted the stories of her son’s friends and their escape over a retaining wall, except one, who didn’t want to be named, that couldn’t make it over the wall to safety, though he did eventually make it out.

A handful of people who gathered at the event also shared their stories at the gazebo area of Ian Deutch, some about acts of heroism and others to recognize the positive aspect of people coming together to support one another in the days following the tragedy.

“Today could be a very different day for me,” said Marla Desmoni, whose son was working security at the festival when the shooting began.

She spoke of her son going back in and helping people to safety.

“His boss said get everybody out, and he decided to go back in and grab the people that were hurt… getting them to where they needed to be, and going back and back,” she said. “He was telling me how he could just feel the gunfire going by him.”

Dan Schinhofen, Nye County Commission chairman, said there are no words to make sense of such a senseless tragedy.

“I’m standing here looking at the candle flickering, and all of this reminds me how fleeting life is,” he said. “I make sure that when I say goodbye to my children and my wife on the phone I always tell them I love them because you never know. You never know if it’s the last time you’re going to speak to them.”

Nye County Sheriff Sharon Wehrly spoke about two deputies that were attending the event and were in the middle of things.

Wehrly said she was in contact with a female deputy, who was unnamed, about being separated from her daughter. The deputy was in the middle of the gunfire and believed her daughter to be safe at the time.

Wehrly was in communication with this deputy but it was eventually lost when the deputy’s phone died.

“Then her phone went dead, and I couldn’t get to her,” Wehrly said. “And I couldn’t send anybody to get to her or anybody else that was experiencing this.”

Wehrly also had another deputy who was there with his wife. That deputy worked to help people during the event.

Sheriff Wehrly did have some words for the community going forward.

“Something we have to learn, and I hope everybody is learning that today, we can’t put ourselves in that position,” she said. “You have to look around. You have to understand that the world has changed since we were little. Things that are happening all over the world are now happening here, and we have to change to meet it.”

Several others spoke at the Ian Deutch Park gathering, including Nye County Commissioner Butch Borasky, Nye County District Attorney Angela Bello and a mental health expert who spoke about the effects an event of this nature can have on the community’s children.

The second candlelight vigil took place in the parking lot of the Pahrump Nugget at 6 p.m. Saturday, Oct. 7.

The event was hosted by Pastor W.R. Budd Hawk from Pahrump’s Heritage Bible Church, where upward of 60 families and individuals attended the hour-long ceremony.

Hawk spoke about the mindset set of an individual who would commit such an act of violence.

He also addressed the tragedy during Sunday service at the church.

“When these types of things happen in this country, it can be so hard to comprehend where someone’s mind was in these types of situations,” he said. “The only thing that I can say about it is exactly that. A lot of times, we are not able to comprehend these things and we do not know what the origins were.

“The only thing that we can do is pray for all of the individuals involved, whether it be the victims or even the perpetrator. During Sunday’s service, as it so often happens, the Holy Spirit is speaking through you. The message that I had planned, was already in existence before any of that took place.”