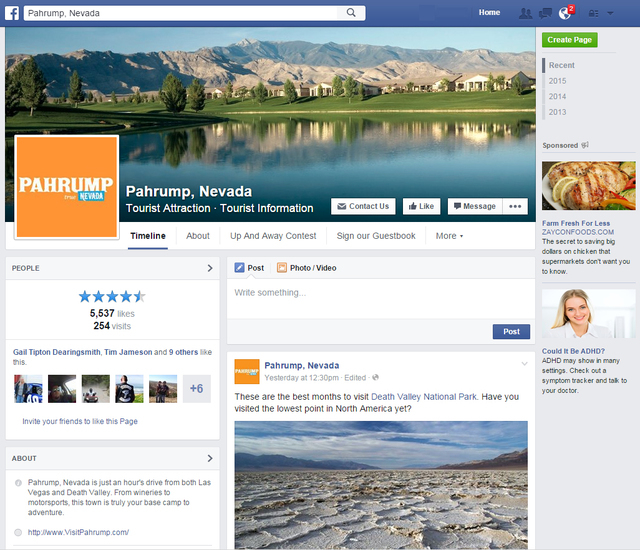 The marketing and tourism efforts by the Town of Pahrump have made strides over the past year, with the help of an outside public relations firm.

Speaking at the County Commission meeting on March 17, Arlette Ledbetter, tourism director for the Town of Pahrump, laid out the results of what teaming up with Las Vegas-based BRAINtrust Marketing produced.

“We gained 150 earned media placements,” Ledbetter said. “When we put forth a press release we gain press off that, for I hesitate to say free, but earned, rather than paid for.”

Working with a $100,000 media-buy budget, Ledbetter explained the public relations value of that press saw its value increase 10 times the budget’s cost.

“So as a result of our paid marketing, the PR value equaled about $1 million, and reached an audience of about 211 million,” she said.

The focus was on Southern Nevada, but securing regional and national media was also key to the marketing success.

One of the best displays of the public relations success was off a press release that was used by one of the largest media producers in the country.

“Here is a perfect example of our earned media. We ran a press release announcing Jetpack America’s arrival to Pahrump, Nevada and the Los Angeles Times picked up that press release and ran it in their newspaper, and additionally in their travel news deals.” Ledbetter said. “So we got really good coverage in the L.A. market, which we could not otherwise afford.”

Besides the PR push, engaging potential visitors online, specifically social media, was something that Ledbetter and BRAINtrust strived to improve. Ledbetter sees online marketing being the town’s future, as she said everything is moving in that direction.

Social media is not the only forum that saw gains as the town’s website also saw an influx of activity.

Ledbetter explained their target audience is the 45-to-65-year-old demographic, mainly because they have more disposable income.

Also, with the adventure-based businesses in town, Millennials are big targets for the town, along with Nevadans that take “staycations,” which Ledbetter explained account for a substantial amount of the tourism in town.

To attract those Nevadans, Pahrump has ramped-up advertising along the roadways in the Las Vegas area, taking up space on eight digital billboards.

Billboards that display, “Located halfway between oooh and aaah,” referencing being located between Death Valley and Las Vegas, “Nevada Unstripped,” and “Hometown fun, one town over” are examples of the advertising aimed at commuters in Las Vegas.

“The billboards have roughly seen over 800,000 impressions per week, so that would be 3.2 million views per month for us,” Ledbetter said.

Ledbetter explained more of the same is planned for 2015, with a way to track information on those who visit town further as one of her goals.

“One thing that we’ll add this year is to develop a city-wide visitation reporting structure,” Ledbetter said. “We need some measurements and some metrics, because better data means better decisions, and we need to know who that traveler is.”