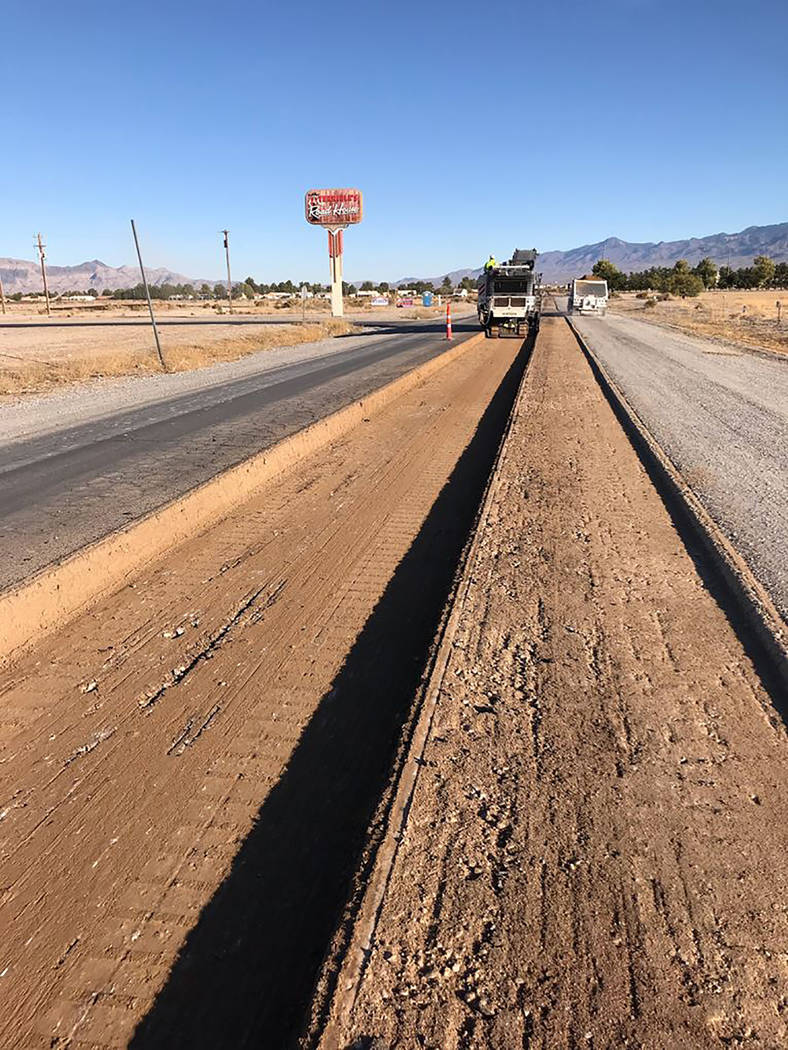 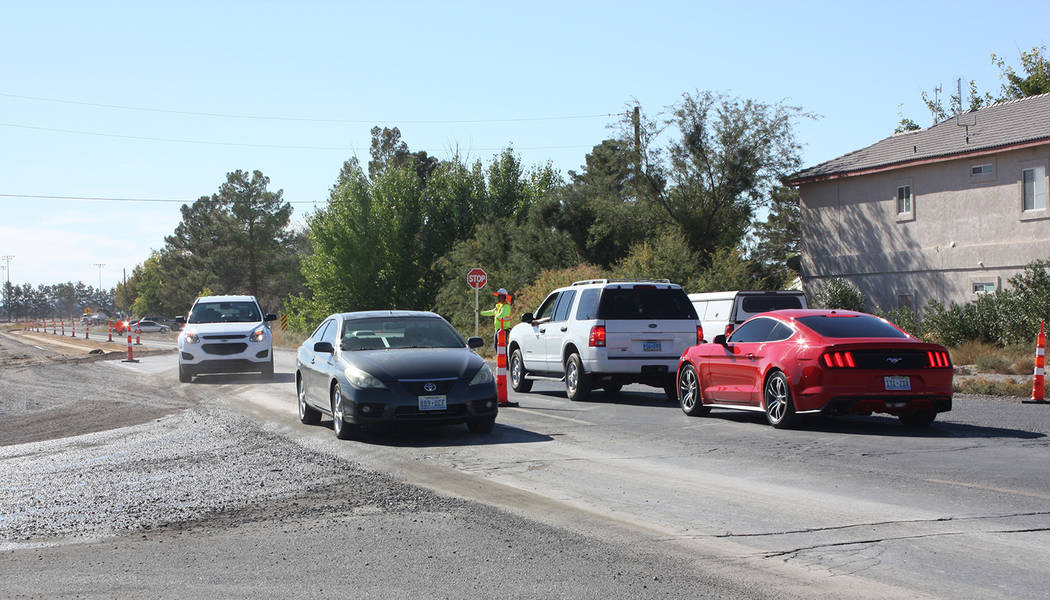 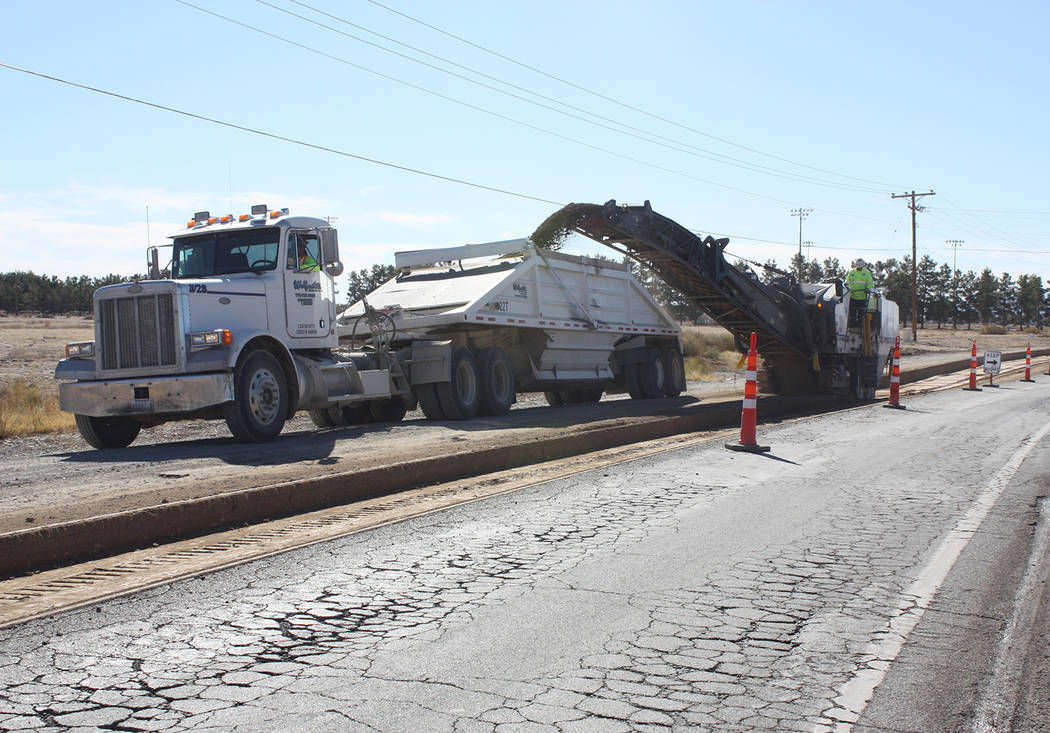 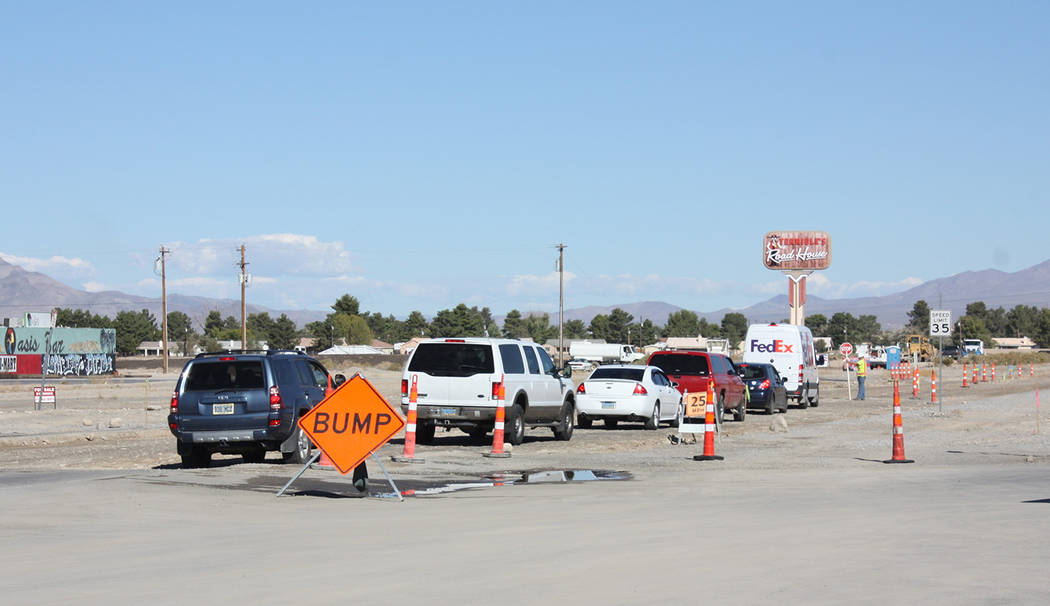 Robin Hebrock/Pahrump Valley Times A line of cars heading north on Pahrump valley Boulevard between Calvada Boulevard and Highway 372 waits for the flagger to motion them to proceed in this photo, shot Tuesday, October 23.

The next stage in road improvements in Pahrump is underway, with the town’s namesake street, Pahrump Valley Boulevard, the target of a $1 million rebuild project.

Construction began earlier this month and the roadway between Highway 372 and Calvada Boulevard will be the subject of extensive activity throughout the rest of 2018 and into 2019.

The release detailed that construction crews will be out at the site from 6 a.m. to 4 p.m. Monday through Thursday each week. As is typical with projects that include a complete rebuild of the roadway, the work will demand single lane closures which will impact traffic, with delays expected in the area.

At no time is Pahrump Valley Boulevard expected to be shut down entirely, with at least one lane of traffic to always be accessible. However, motorists may want to seek alternative routes in order to avoid potential delays.

Wulfenstein Construction Co., a Pahrump-based company which regularly undertakes roadwork for Nye County, secured the project with the lowest responsive bid at $991,992. The only other bidder was Meadow Valley Contractors out of Las Vegas, which offered an estimate of $1,553,618.

“The project is expected to be completed in February,” the news release explained. “The project is funded from the Nye County Road Fund, which includes the five-cent gas tax increase to nine cents per gallon approved by the Nye County Commission in late 2015. The county maintains approximately 2,747 miles of roads and bridges.”

Pahrump Valley Boulevard is not the only local road to see some major improvements, with Homestead Road another the county has recently been focusing on.

Homestead Road, much like Pahrump Valley Boulevard, is a highly-traveled street and at one time it was a crumbling, pot-hole riddled drive. Now, however, Homestead Road has seen its own rebuild, which just came to a conclusion in the last few weeks. Although there are a few final touches to add, the surface itself is now smooth and even, providing a better driving experience for all.

“The Pahrump Valley Boulevard resurfacing comes as major work on the $1.2 million Homestead Road resurfacing project has been concluded. The Nye County Road Department is awaiting materials to stripe Homestead from Manse Road to just past Thousandaire Boulevard,” the release read.