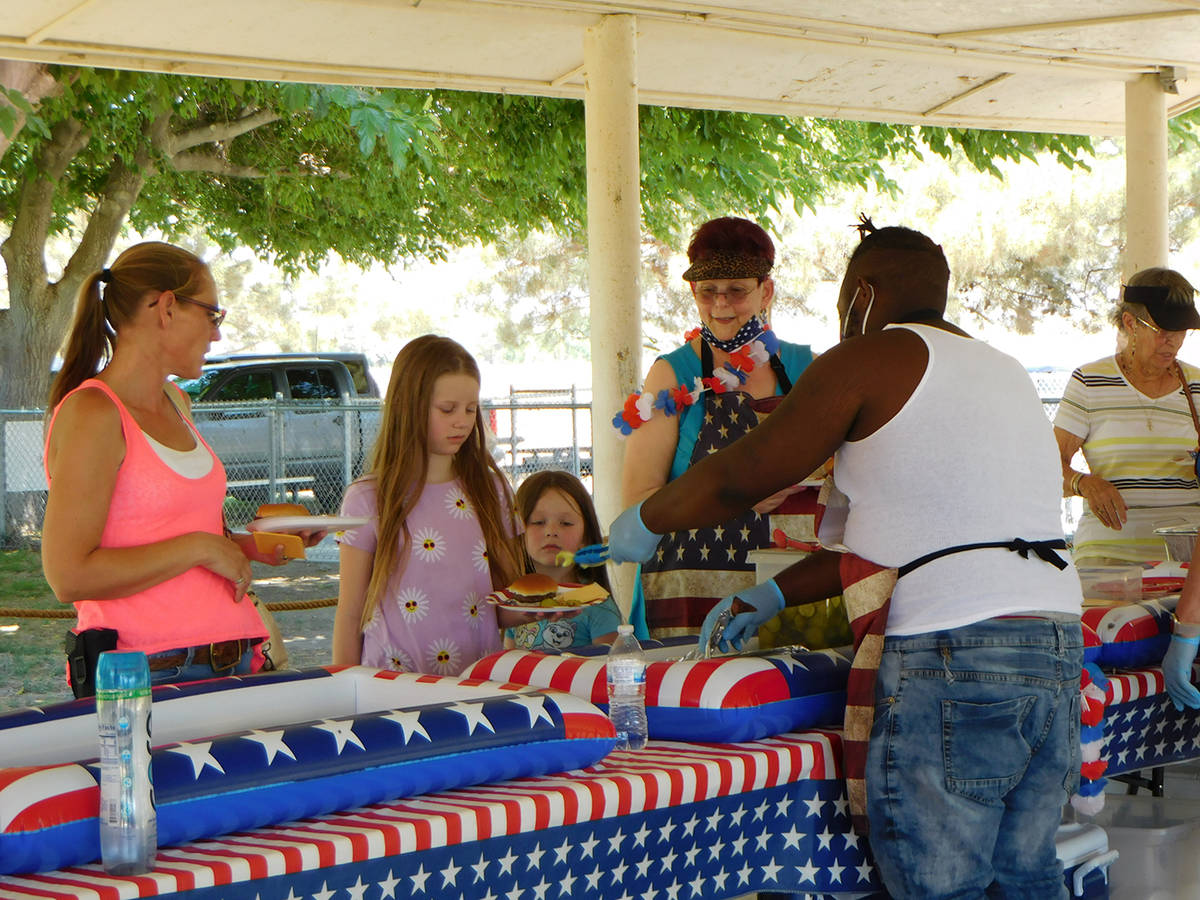 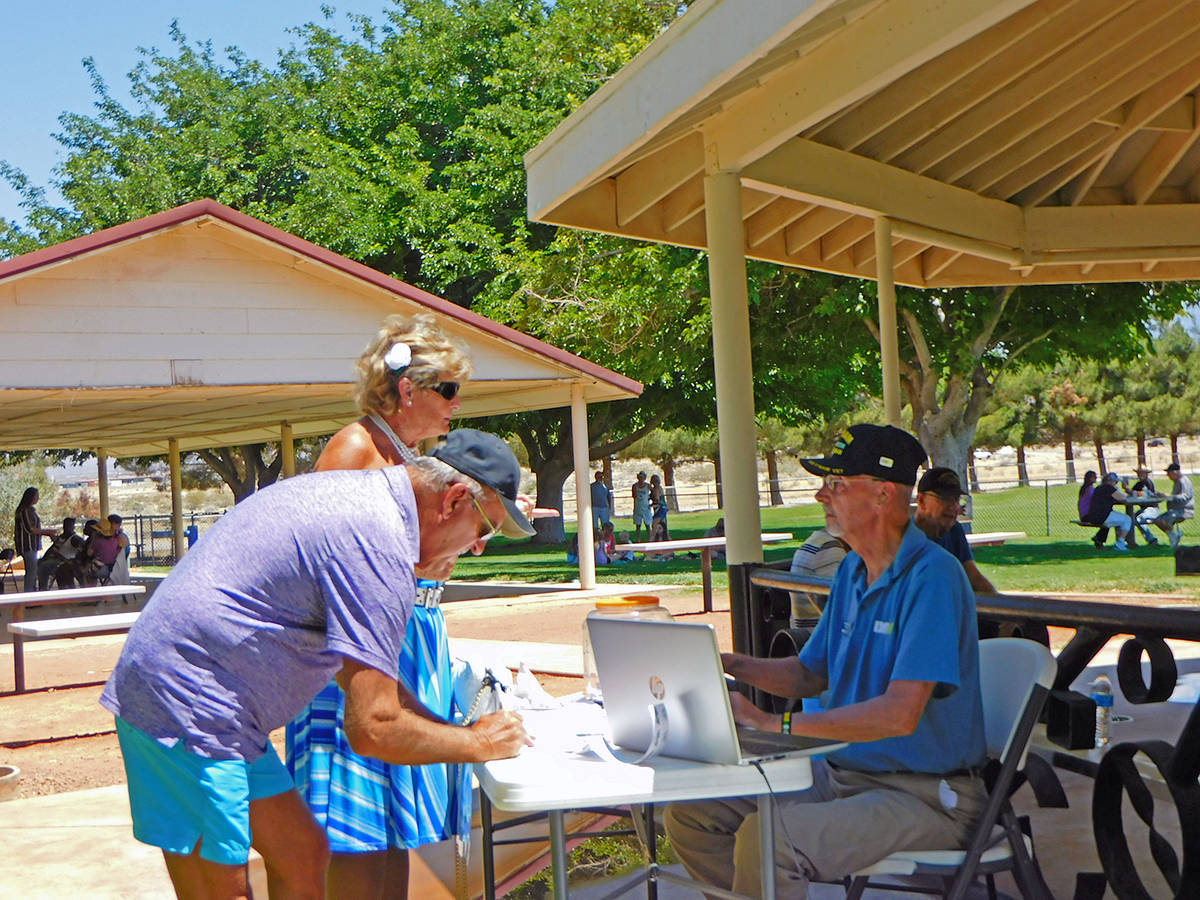 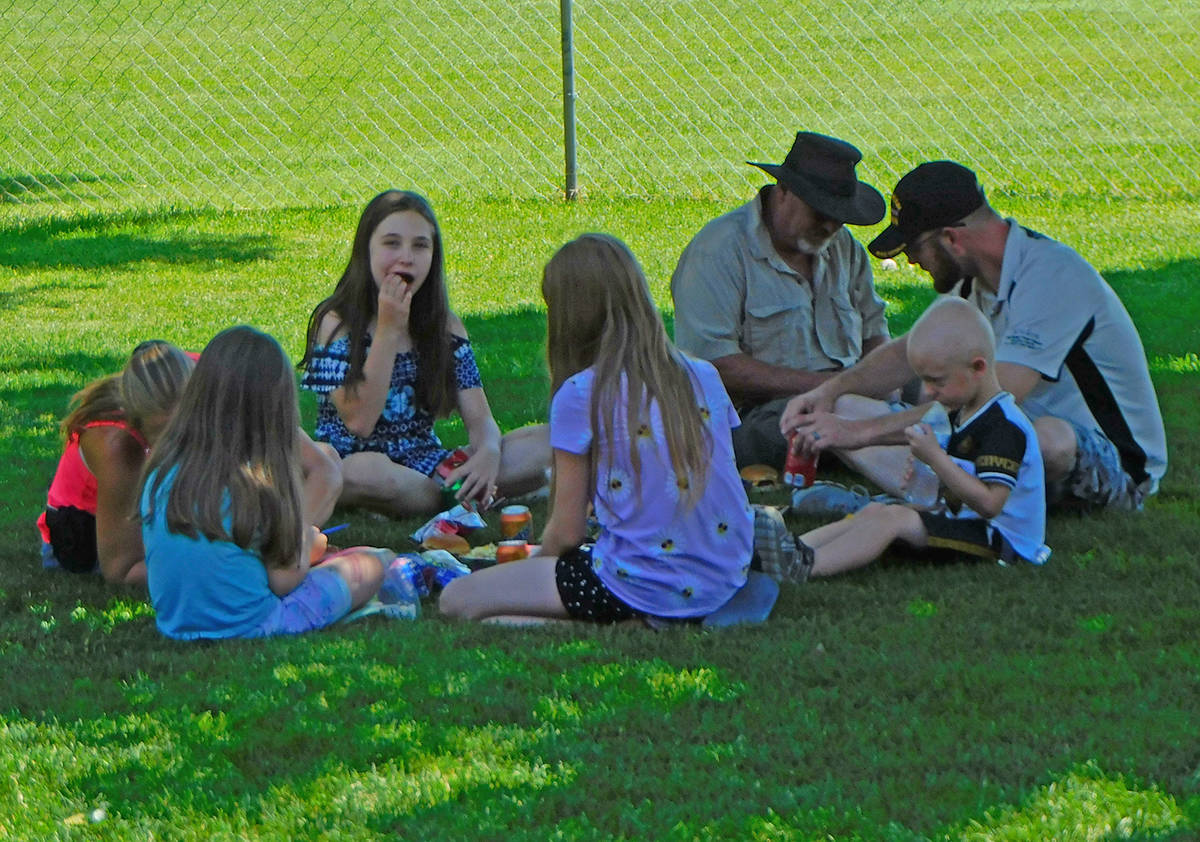 Robin Hebrock/Pahrump Valley Times A family is pictured sitting in the shade beneath a tree to enjoy their lunch during the Veterans Appreciation Barbecue. 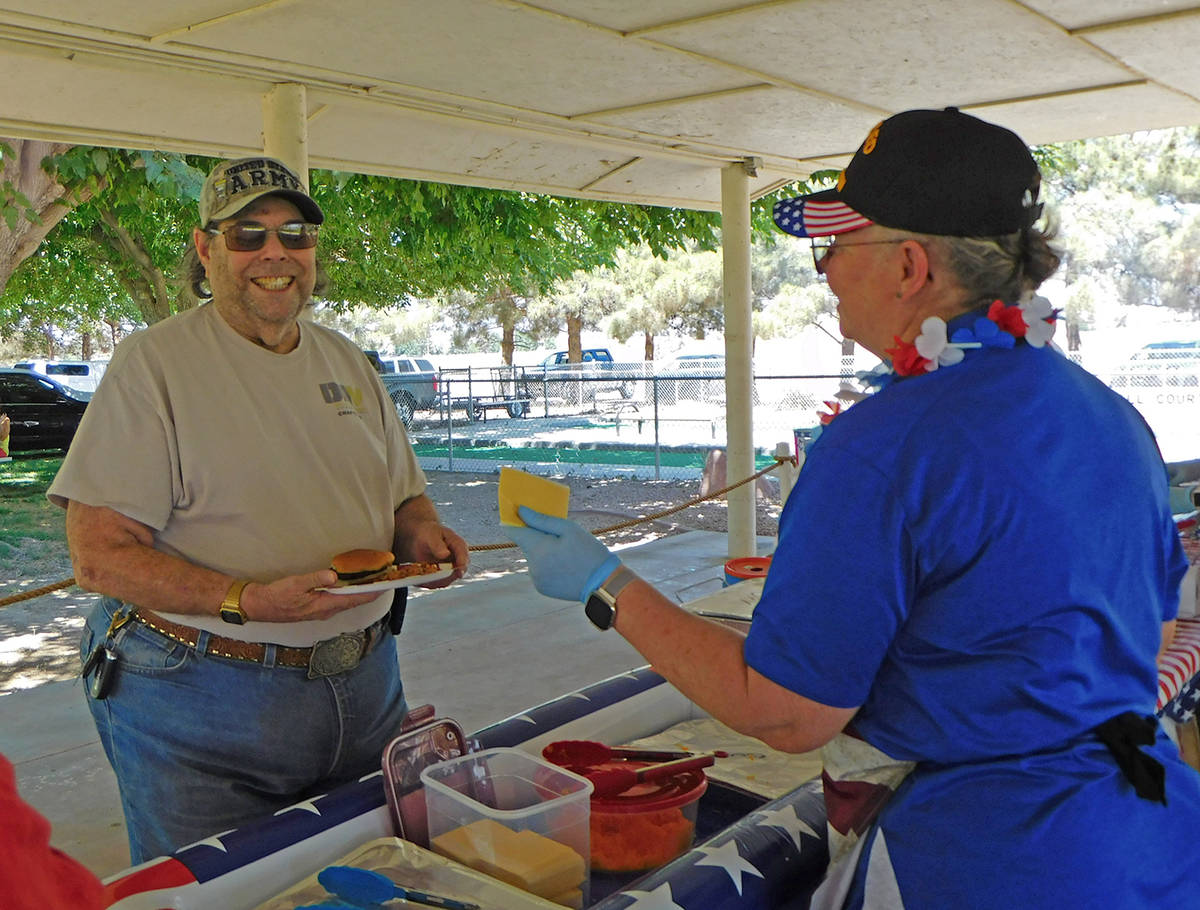 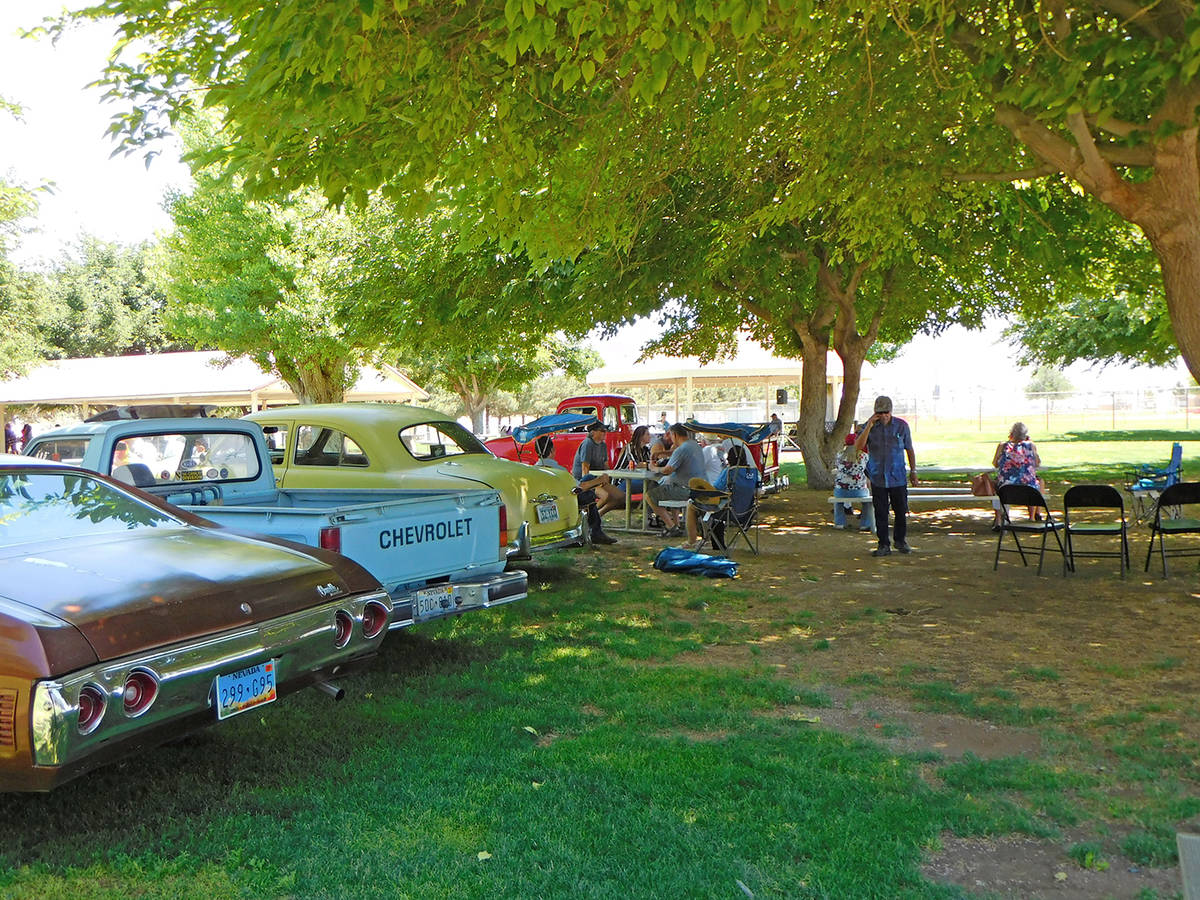 Robin Hebrock/Pahrump Valley Times Some classic cars were on display at the Veterans Appreciation Barbecue.

Hosted Saturday, June 5 at Ian Deutch Park, the Veterans Appreciation Barbecue was put on by the Disabled American Veterans Chapter #15 of Pahrump, a local group that is part of a nationwide organization in which the members are dedicated to one thing: giving back to fellow veterans and their families, with a wide array of services and resources utilized in pursuit of that goal.

The Veterans Appreciation Barbecue is just one of methods use by the DAV Chapter #15 as a means of giving back.

The park was abuzz with activity on Saturday, with dozens and dozens of area residents settling in under the trees and lounging in the shade with tottering plates filled with all sort of luncheon goodies.

For the veterans themselves, as well as their immediate family members and caregivers, the meal was provided completely free of charge. For all others, they were able to purchase a meal ticket for a small cost, knowing they would not only be able to chow down on the hamburgers, hotdogs, macaroni and potato salads, chips and cookies but that they would also be showing support for their local heroes, as every dollar raised at the event is destined to be used by the DAV in its mission to assist veterans.

In addition to the barbecue feast itself, there were several classic cars out on display throughout the event and musical entertainment to keep the toes tapping and the fingers snapping as event-goers chatted amiably, with snatches of conversation and laughter punctuating the general hubbub. There was also a chance for one lucky person to walk away with a bit of extra cash in their pocket thanks to the 50/50 raffle.

All in all, it was a successful endeavor, the first such event the DAV has been able to hold since the onset of the COVID-19 pandemic in March of 2020. Event organizers were obviously pleased to be out in the park with their comrades once more and the attending veterans were very much humbled by and appreciative of the show of honor and recognition they received during the Veterans Appreciation Barbecue.

The DAV Chapter #15 is always looking to recruit additional members to bolster its efforts in the local community, which include providing assistance to veterans seeking to access the benefits they earned by their service, advocating for veterans at the federal level, educating the public about the sacrifices these men and women have made and their needs when transitioning back to civilian life, providing transportation to veterans in need and much more.

DAV Chapter #15 Commander Terry Janke gave an outline of the eligibility requirements for becoming a member of the DAV, informing the Times that members can be, “Any man or woman, who served in the armed forces during a period of war or under conditions simulating war, and was wounded, disabled to any degree, or left with long-term illness as a result of military service, and was discharged or retired from military service under honorable conditions.”

The group meets monthly on the third Tuesday of each month at 270 N. Highway 160, near the Pahrump Community Pool and Pahrump Valley Fire and Rescue Service Station 1. Meetings begin at 5 p.m. with a meal and the general meeting starts at 5:30 p.m.

For more information on joining the DAV or its many services and activities, drop by one of its meetings, visit www.dav15nv.org or call 775-537-5146.