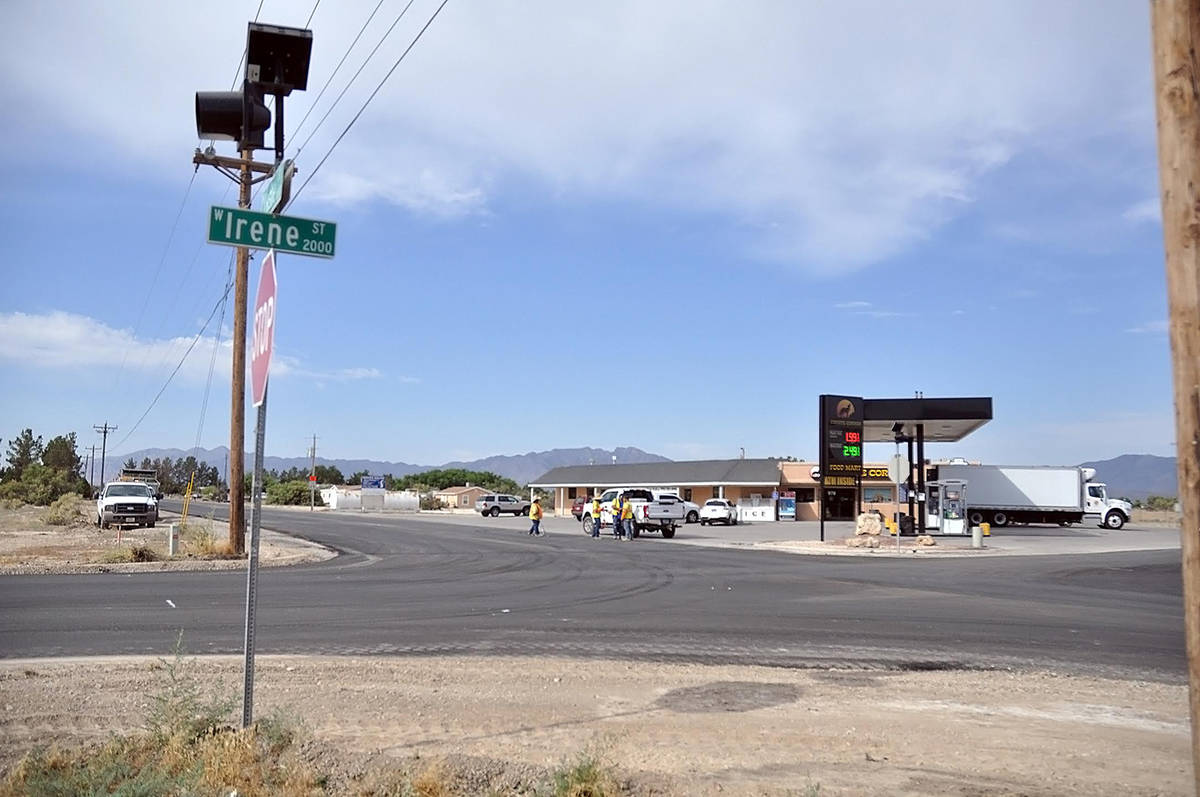 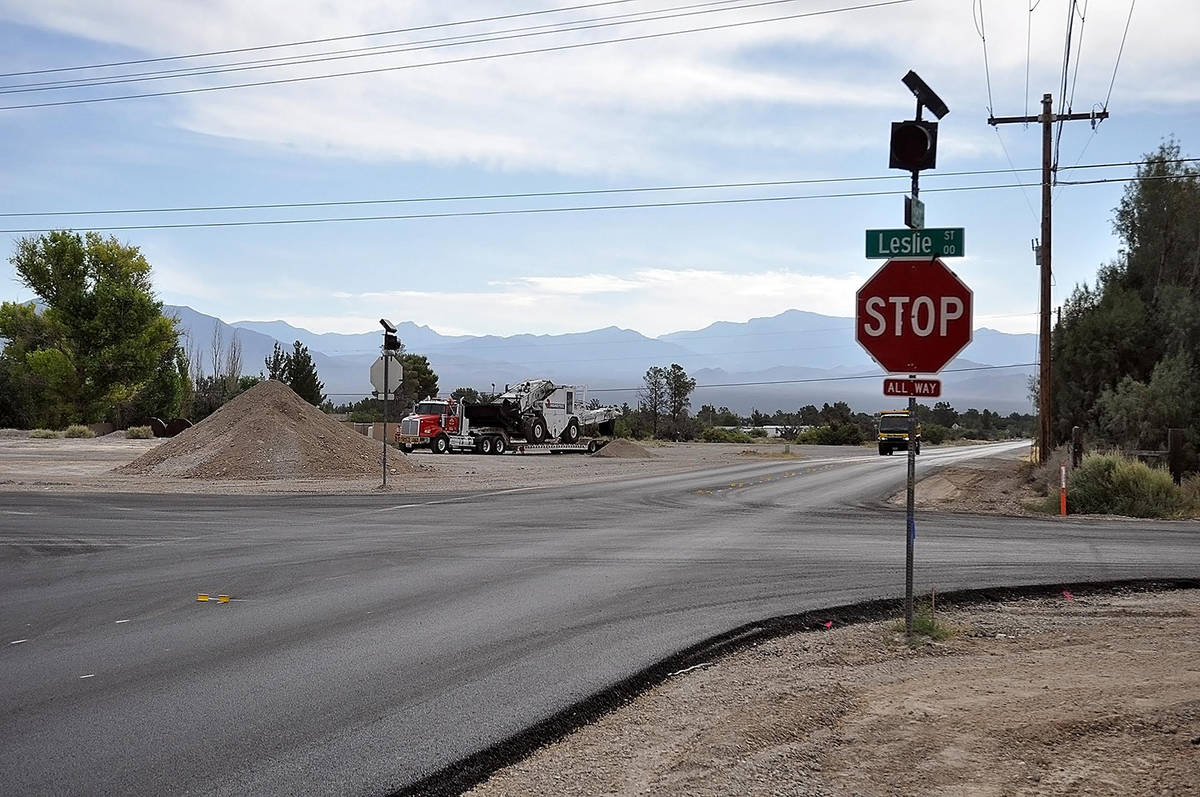 Horace Langford Jr./Pahrump Valley Times The intersection of Leslie Street and Basin Avenue is shown with its new coat of asphalt. 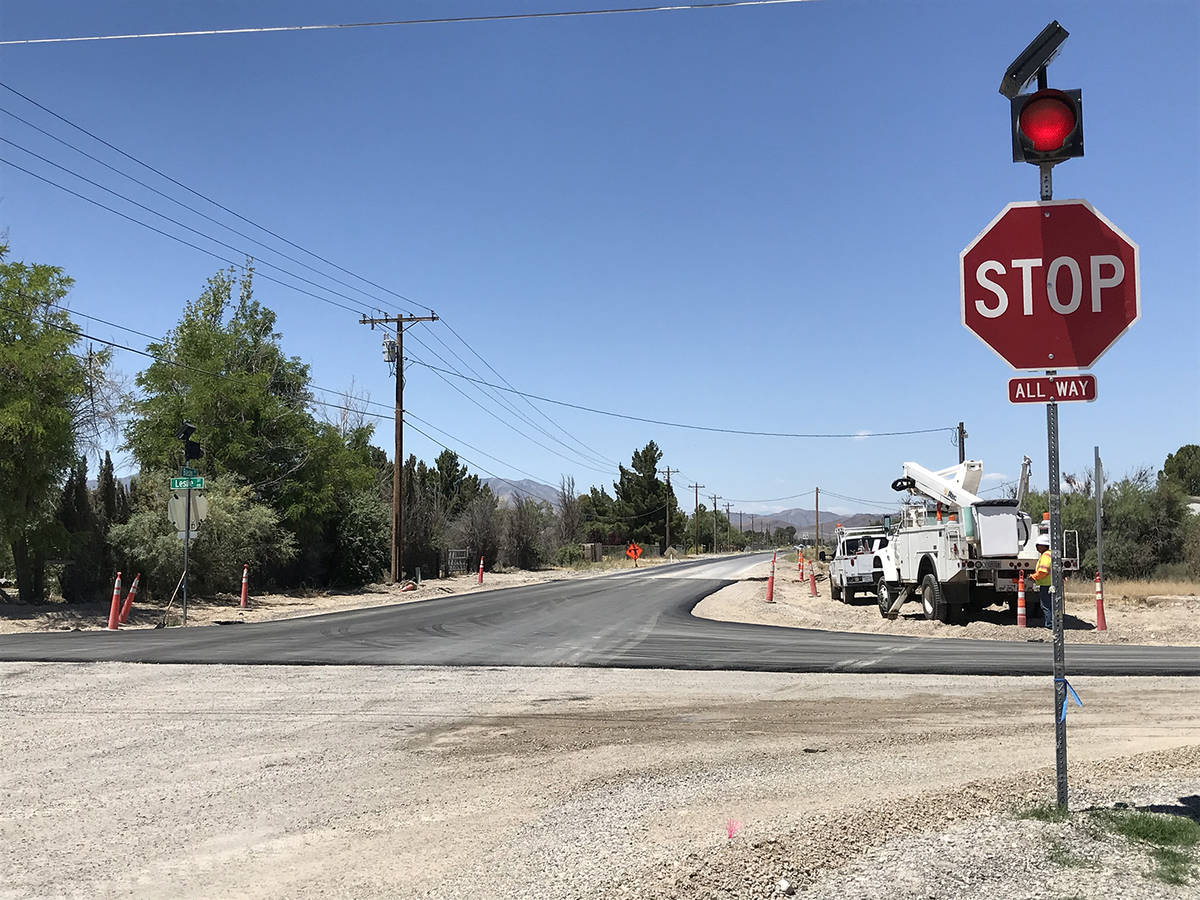 Robin Hebrock/Pahrump Valley Times This photo, taken Thursday, May 28, shows a portion of the pavement laid at the intersection of Leslie Street and Basin Avenue that morning. 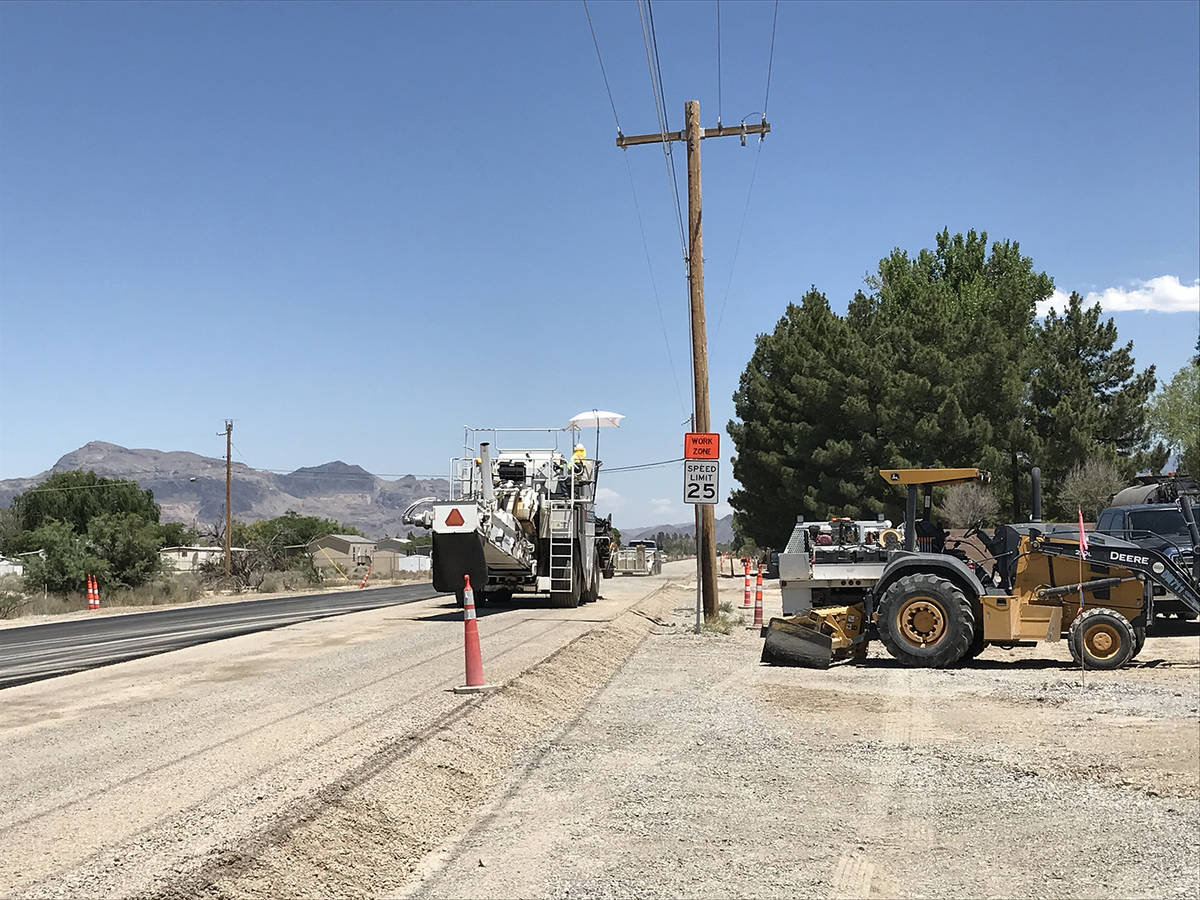 Robin Hebrock/Pahrump Valley Times Wulfenstein Construction Co. crews started the Leslie Street repaving project on Thursday, May 28, with paving complete as of Monday, June 1. Nye County crews will now undertake the finishing work, such as striping and shoulder adjustments, to complete the project.

Leslie Street in the Pahrump Valley has a fresh new coat of asphalt, with paving of the 1-mile stretch between Irene Street and Basin Avenue concluding as of June 1. There is, however, still some finishing work to be done before the project is complete, tasks that, just as the prep work conducted before the paving was laid, will be handled by Nye County Public Works crews.

The Leslie Street improvements started several months ago, with Nye County road crews ripping up the existing asphalt and readying the area for Wulfenstein Construction Co., which won the contract for the paving with its bid of $443,607.95.

“The Leslie paving was completed late last night so all of Leslie (between Irene Street and Basin Avenue) has brand-new asphalt on it, including the asphalt on the driveways that were there that we widened the road to,” Nye County Public Works Director Tim Dahl said during the Nye County Commission’s June 2 meeting.

“We’ve still got a lot of work to do to clean that up, to address the other driveways, to shoulder up to the new asphalt thickness, so we are still working on that. Striping, we still have to stripe it,” Dahl continued. “In the meantime, if we can continue to ask the public to give us a break so to speak and have a little patience, we’ll be done with that before you know it.”

Dahl said his department will shift its focus to other tasks.

“We’re going to be continuing to work on the rights of way,” Dahl stated. “With all of our resources focused on Leslie for the last significant amount of time, we’re going to be diving back in on the weeding and all the other patching activities that we normally would be doing this time of year without a big project like that.”

Public works is preparing for another major project targeting roads in Amargosa Valley that were damaged by the construction of the Sunshine Valley Solar Project.

“Anvil and Power Line roads, we have proposals that should be submitted tomorrow,” Dahl said. “We had a pre-bid meeting, a video conference full of contractors to bid on Anvil and Power Line. We should be getting those bids in tomorrow. I am really excited and hopeful that we’ll get some bids that are within our budget means.”

Submitted bids will go before the Nye County Commission.

“Anvil and Power Line are portions of a solar project’s construction routes,” Dahl said. “The solar project out there in Amargosa had a construction route they chose to use solely to get materials in and out of their property, so they paid for the damage they have done to those roads from their commercial activity. For example, there were a couple hundreds trips a day that they did to those roads to access their property for, I think it was, 363 days, for the duration of the construction of that.”

He added that this project will include pulverization of the existing road surface and repaving of approximately 7 miles.

“That’s one hell of a project that’s happening out in Amargosa,” Commissioner Leo Blundo remarked. “There’s been a lot of work bringing that forward and getting that together.”