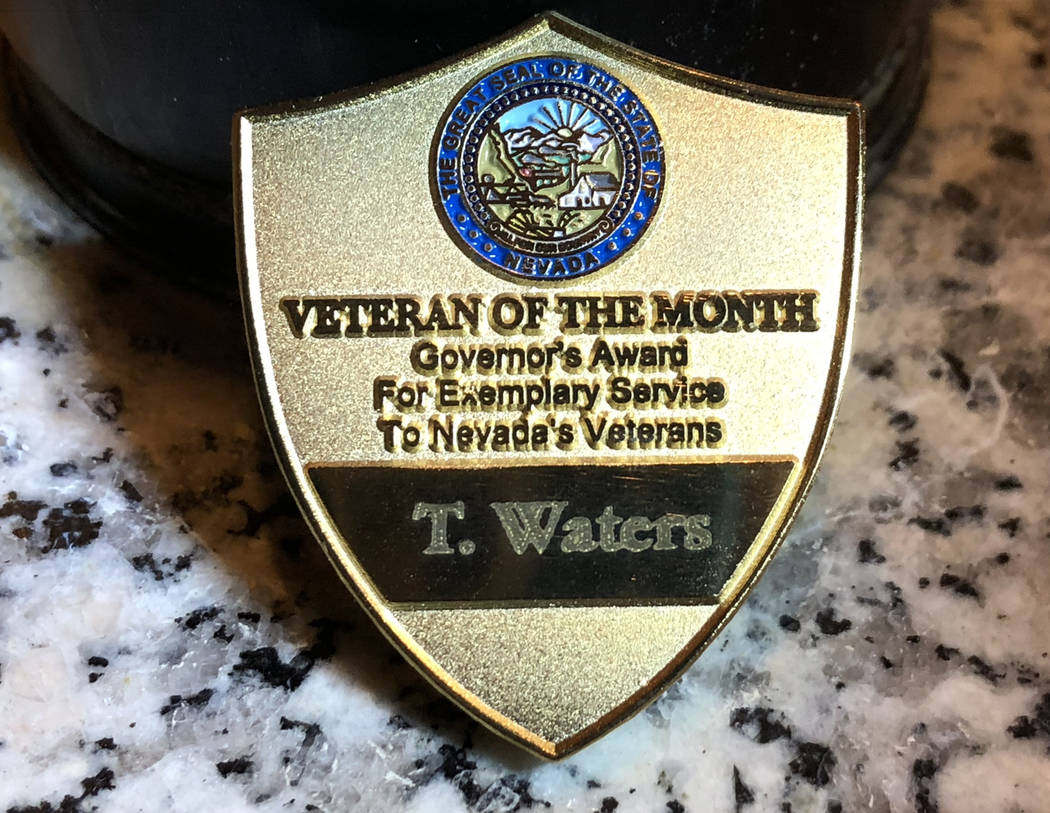 Special to the Pahrump Valley Times A pin was bestowed upon Dr. Tom Waters along with his award as Veteran of the Month for November. 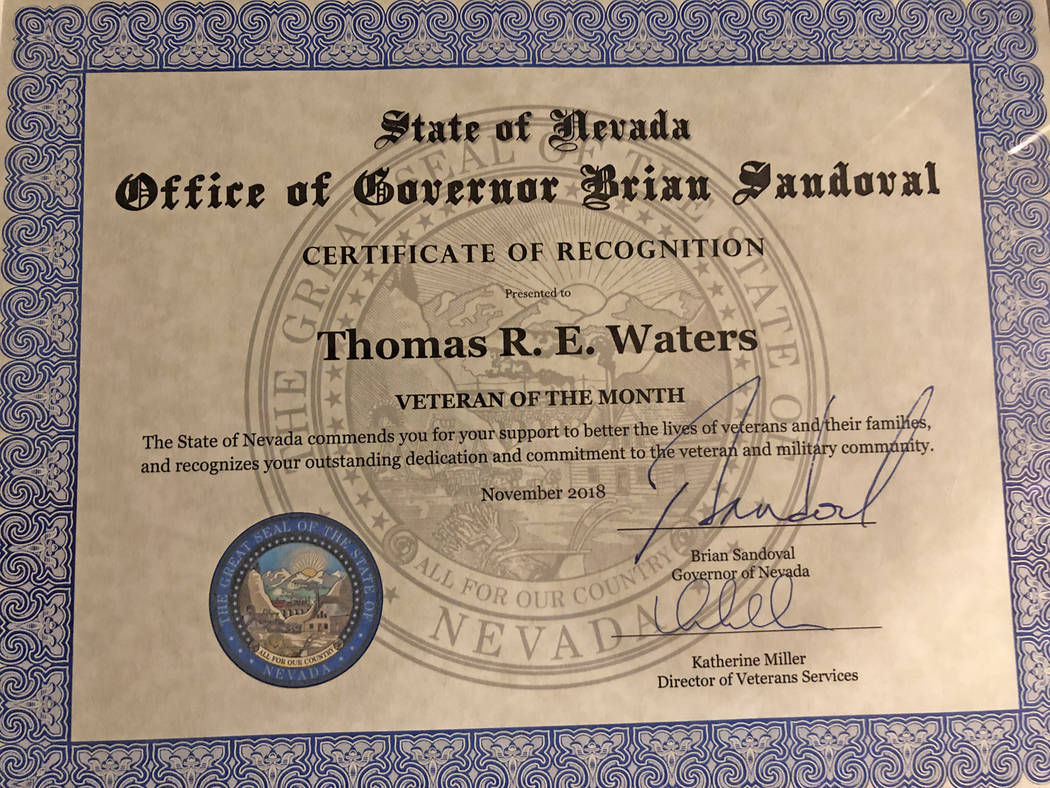 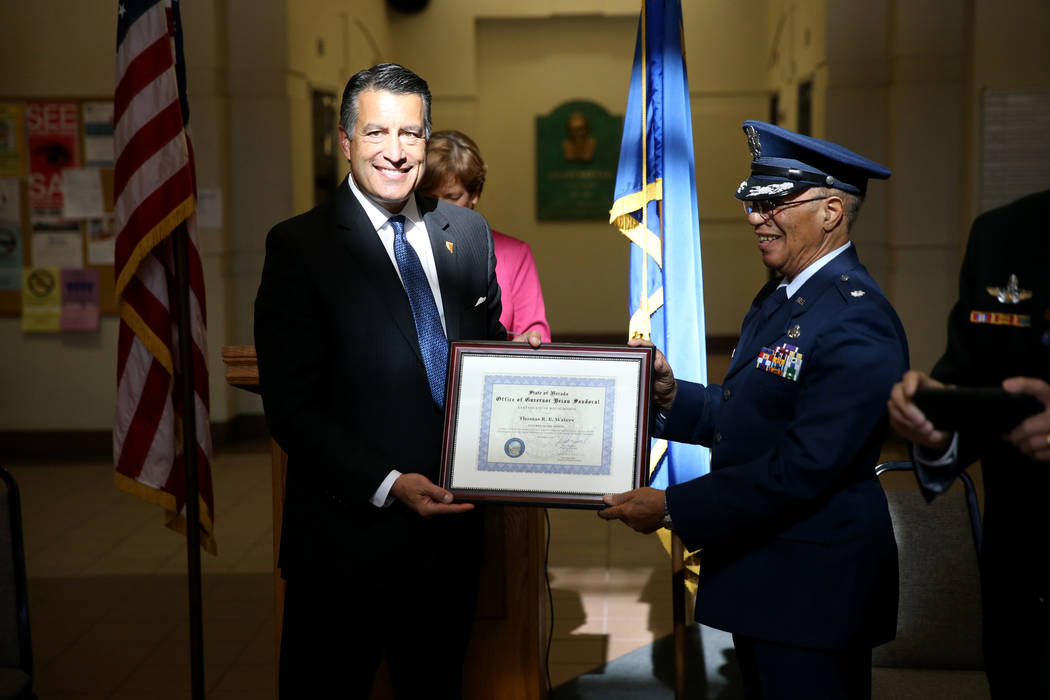 Pahrump Valley veteran and community activist Dr. Tom Waters received some very special recognition this month, earning the honor of the title of Nevada’s November Veteran of the Month.

A Nevada state-sponsored program, the award honors veterans who have continued their good works even after retirement by dedicating their own time and energy to helping other veterans, their communities or the military.

In Waters’ case, his positive impact can be readily seen in the many local organizations with which he volunteers. From veterans’ organizations to charitable groups to committees focused on improving the lives of others, Waters is one of Pahrump’s shining examples of community service and generosity.

“It was quite an honor,” Waters said in an interview with the Times, remarking that it was a humbling experience that brought him great joy. He detailed that Dan Peterson, commander of the Military Order of the Purple Heart Chapter #730, was the person who had nominated him.

Waters said he was extremely happy to be named among the many others who have been chosen as Veteran of the Month in the past, several of which include members of the very same Purple Heart chapter whose commander put forward his name.

Waters spent 32 years in the U.S. Air Force and three years in the reserves, eventually attaining the rank of Lt. Colonel. Not slowing down after service to his country, he has many feathers in his cap of community service as well.

Volunteer time that has directly impacted veterans has been given with his life membership in the Disabled American Veterans Chapter #15, the Military Order of the Purple Heart #730, the Veterans of Foreign Wars Post #10054 and the American Legion Post #22.

Waters also founded the Veterans Finance Committee, which focuses on compiling projects that utilize Nye County-provided veterans’ services funds. He helped create the State of Nevada Veterans Silver Star and Bronze Star license plates as well as and headed the initiative to have Nye County and Pahrump named as Purple Heart entities.

Organizing monthly inspirational veteran ice cream socials and serving meals to veterans at the annual Community Thanksgiving Dinner are two more examples of Waters’ constant drive to give back to those who served.

In the general community, Waters is no less active. He is a member of the Pahrump Valley Rotary Club, the local transportation committee and the community outreach committee, chairman of the Pahrump Prostate Cancer Support Group and a community presenter of the Act of Kindness Award with KPVM-TV. Waters also served a four-year term on the elected Pahrump Town Board prior to its disbandment, is an ordained local elder in two area churches and even hosts his own Nye County television show on KPVM-TV.

Waters also took the time during his interview to highlight the woman who was selected as Nevada’s November Volunteer of the Month, Charm McElree of Boulder City, whom he was honored with on November 15 during an award presentation by Nevada Gov. Brian Sandoval. “I was just honored to be there with her, it was fantastic,” Waters said. “She has done so much.” McElree works with Operation Recognition.

As to his reasons for continually pushing forward and being there for former military service members, Waters said it was just something he felt he had to do.

“Being a veteran and knowing what veterans have gone through, I just feel that if I can do something to help any of the veterans, that’s what I want to do,” Waters said with passion. “I know my entire career was benefited by the people who worked with me and for me and those who were above me. Anything I can do to give back at this point, that is what I want to do.”