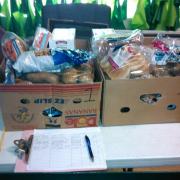 Providing the most basic of needs to those who are the most vulnerable in the community is the main objective of Pahrumpâs Path of Hope.

For more than five years, the organization operated by New Hope Fellowship Ministries, regularly distributes food to the valleyâs less fortunate at no charge.

Coordinator Diane Hett said though the weekly distributions will continue, the hours have recently changed, due to the weather.

âIt was just too hot for everybody, including those that are getting the food and for the workers and for those sitting in their cars waiting in line,â she said. âThe time it takes for volunteers to distribute the food varies because it depends on how many people we have that come through our line.â

Hett said sheâs concerned that not everybody is aware of the new schedule.

Path of Hope partners with Three Square Food Bank to distribute the food items each week.

Hett said neither she nor the recipients know what they will receive until the delivery truck arrives.

âWe do get food from other sources but most of it is from Three Square,â she said. âToday we had a bunch of water to give away along with bread, potatoes and produce like cucumbers and carrots. We have all kinds of different varieties of food including canned goods.â

Since Path of Hope has been providing the service in Pahrump, Hett noted the response shows thereâs a real need in the community.

âIf we were to close down, there would be a lot of people who would not get food,â she said. âA lot of people go to many of the different food pantries that are a lot smaller of course. We currently feed anywhere from 350 to 500 families in a given week.â

Additionally, Hett said though many of the recipients are employed, stagnant low wages and the cost of food create the need to seek assistance.

âSome of those people have a small income but it’s not enough to buy groceries but yet they don’t qualify for food stamps and other kinds of assistance,â she said. âI know several families who are in that situation because they lost their jobs and haven’t been able to replace that income so without us, there are a number of families that would go hungry. This is a very important safety net for a lot of folks.â

That program, Hett said, occurs once every eight weeks and requires certain documentation.

âThey have to bring in an identification card and proof of residency and that’s for the commodities distribution which is every other month,â she said. âIn fact, July 18th will be the next commodity distribution day.â

Gratitude, Hett said, is something that is not lost on the recipients, as they offer tokens of thanks every week.

âThe recipients are very grateful for this and we usually get at least four to five little notes saying thank you for all that you do,â she said. âWe do take donations and we do get some donations from time to time from some of the other local churches. I get a few donations from people who don’t even live here.â