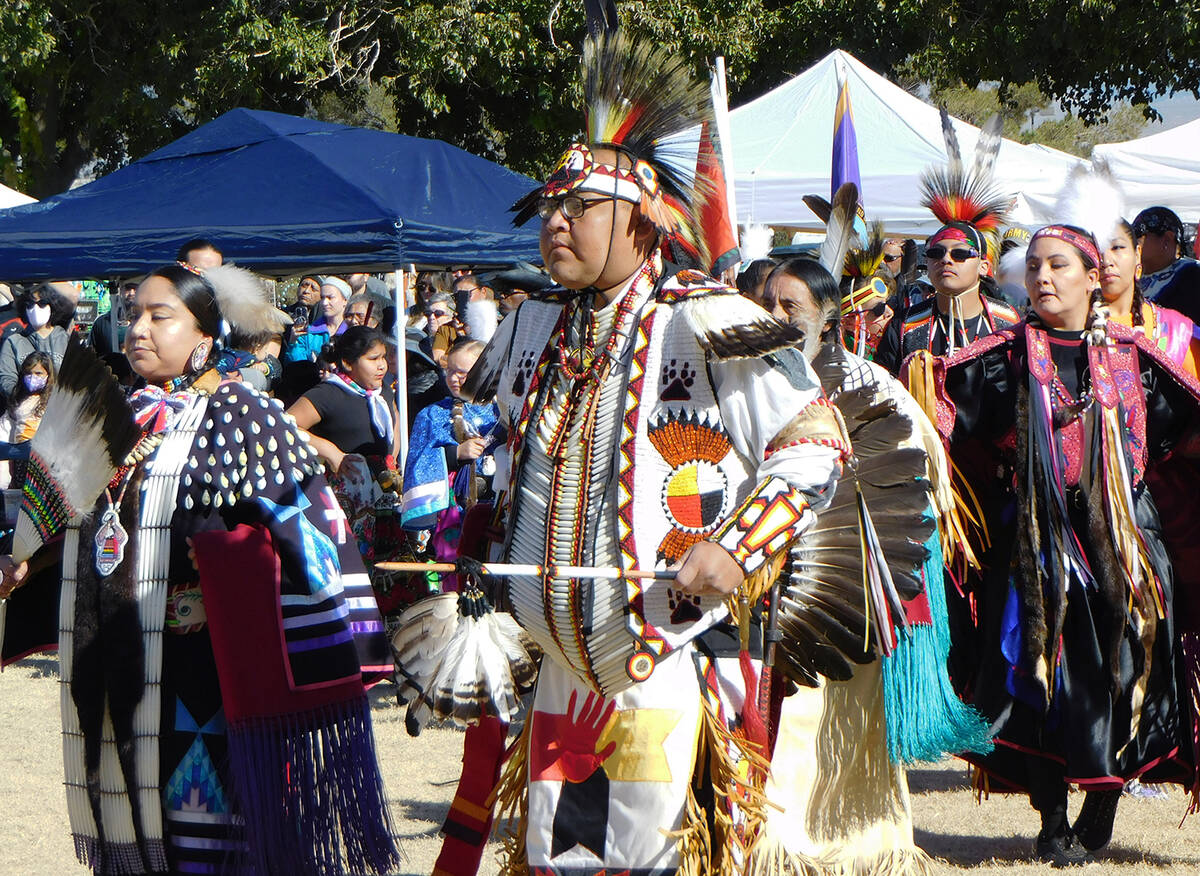 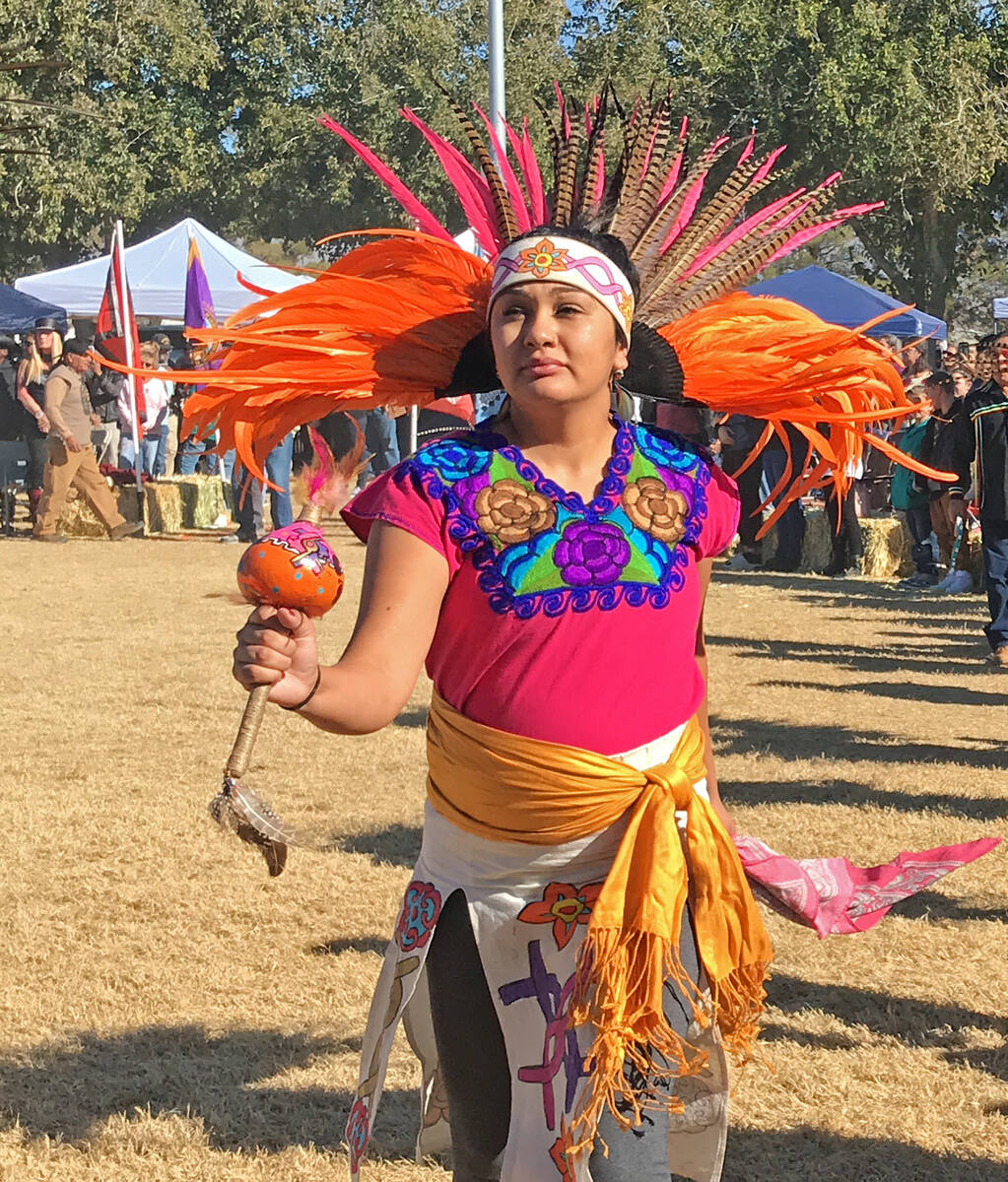 Robin Hebrock/Pahrump Valley Times A Native American dancer in traditional garb is shown absorbed in the moment during the Pahrump Social Powwow. 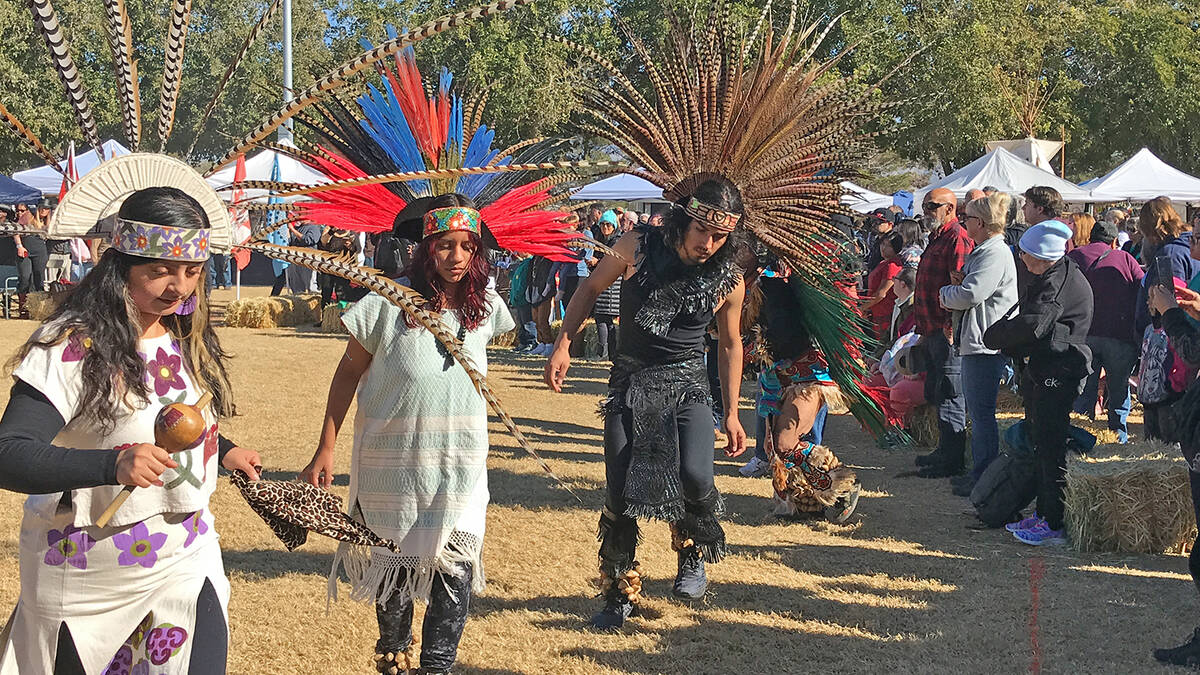 Robin Hebrock/Pahrump Valley Times Spectators line the dance circle to watch as Fancy, Grass, Jingle and Traditional dancers, immersed in the beat of the drum, make their way in during the Grand Opening at the Pahrump Social Powwow.

Robin Hebrock/Pahrump Valley Times Attired in the regalia of their tribes, Pahrump Powwow dancers proudly displayed the powerful and rhythmic music and dances of their long-held and much-treasured heritage. 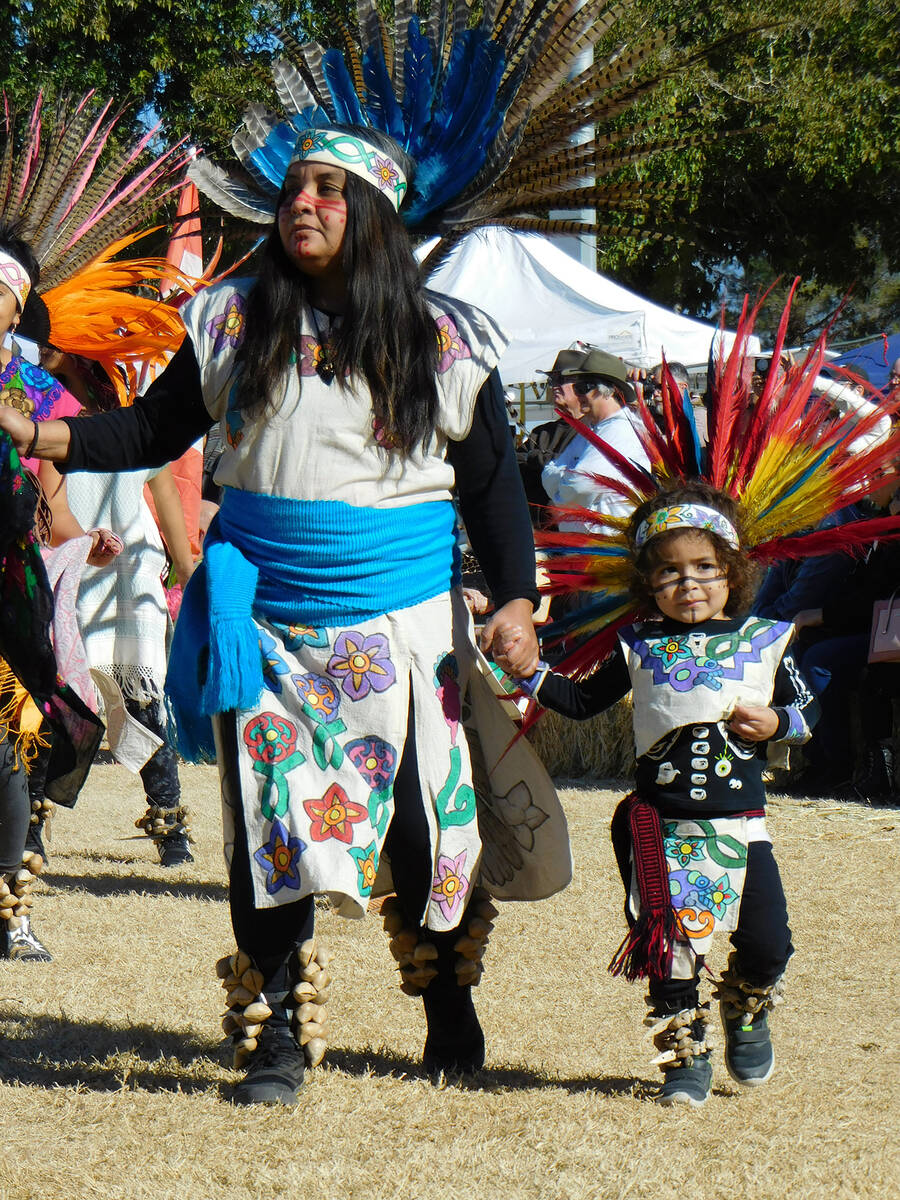 Robin Hebrock/Pahrump Valley Times Adults were far from the only participants in the Pahrump Social Powwow, with several youngsters arrayed in feathered headdresses, shell ankle bracelets and beautifully embroidered outfits. 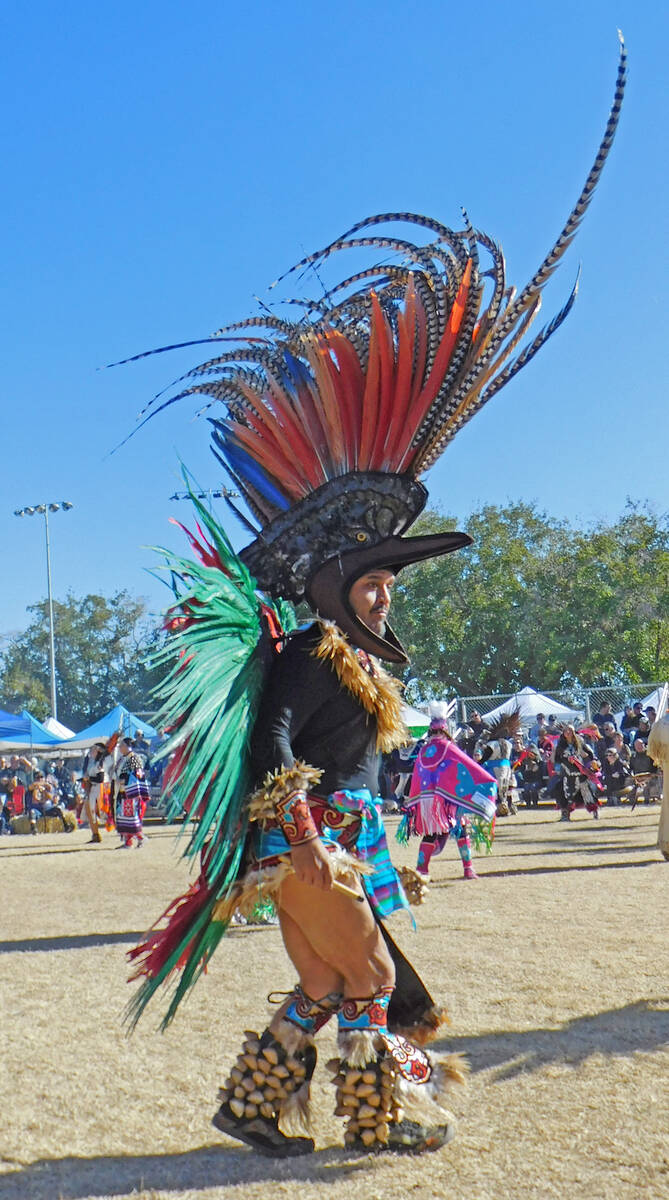 Robin Hebrock/Pahrump Valley Times An Aztec Dancer is pictured bathed in sunlight as he stomps and whirls around the dance circle at the Pahrump Social Powwow. 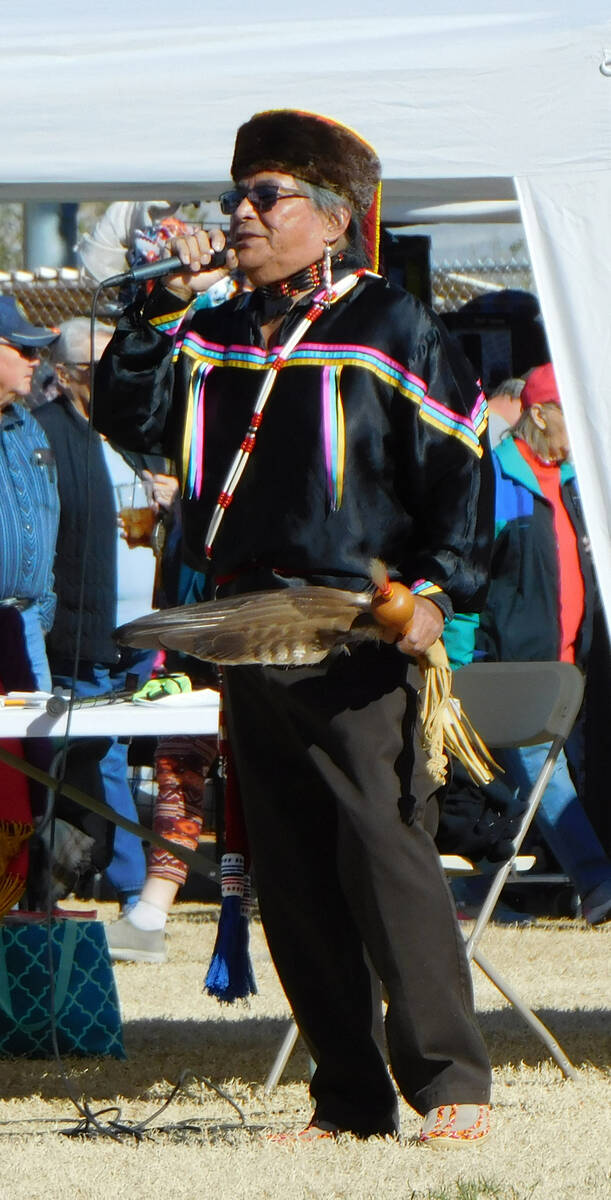 Robin Hebrock/Pahrump Valley Times Michael Reifel was once again the master of ceremonies for the Pahrump Social Powwow. 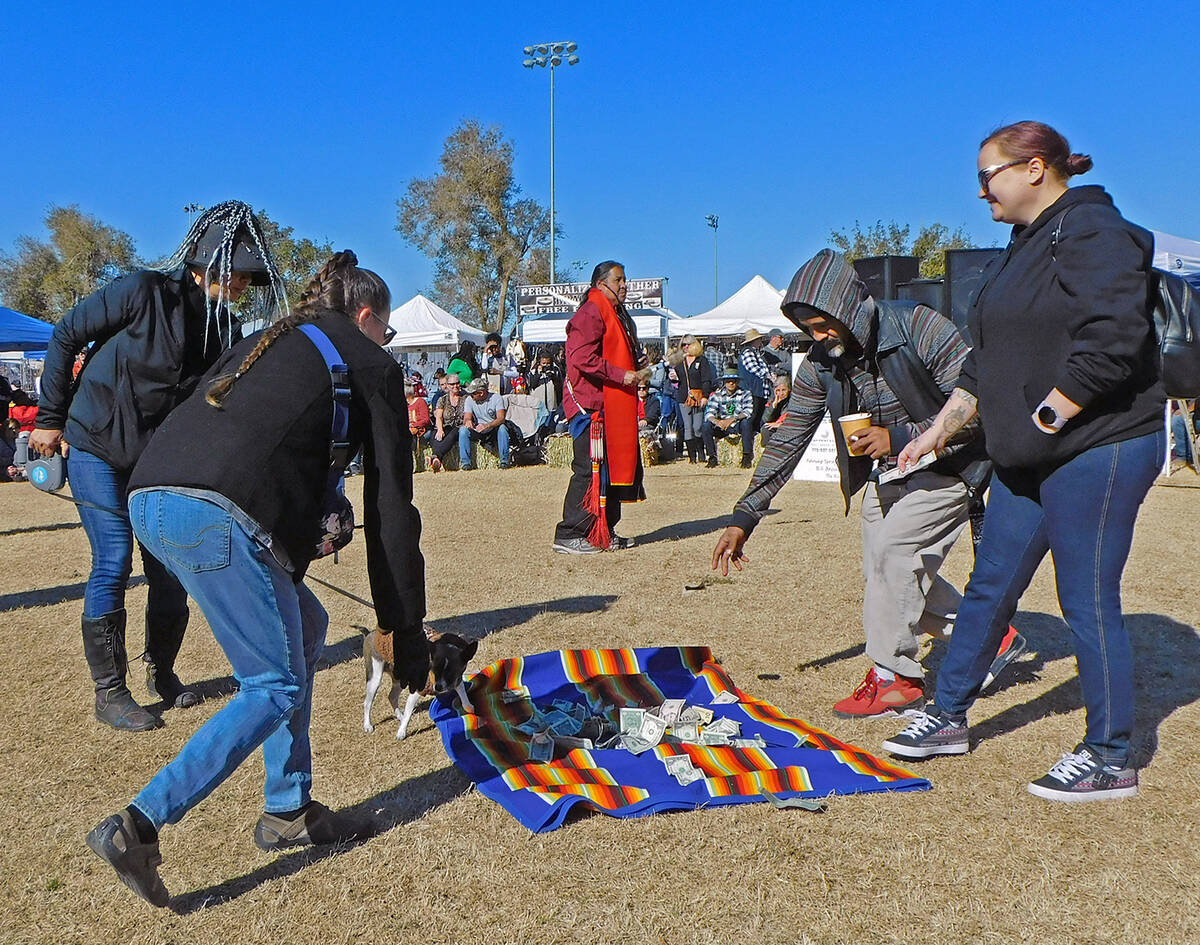 Robin Hebrock/Pahrump Valley Times The blanket dance is a traditional part of the Pahrump Social Powwow, giving attendees the chance to make donations toward the Drums that participate in the event. 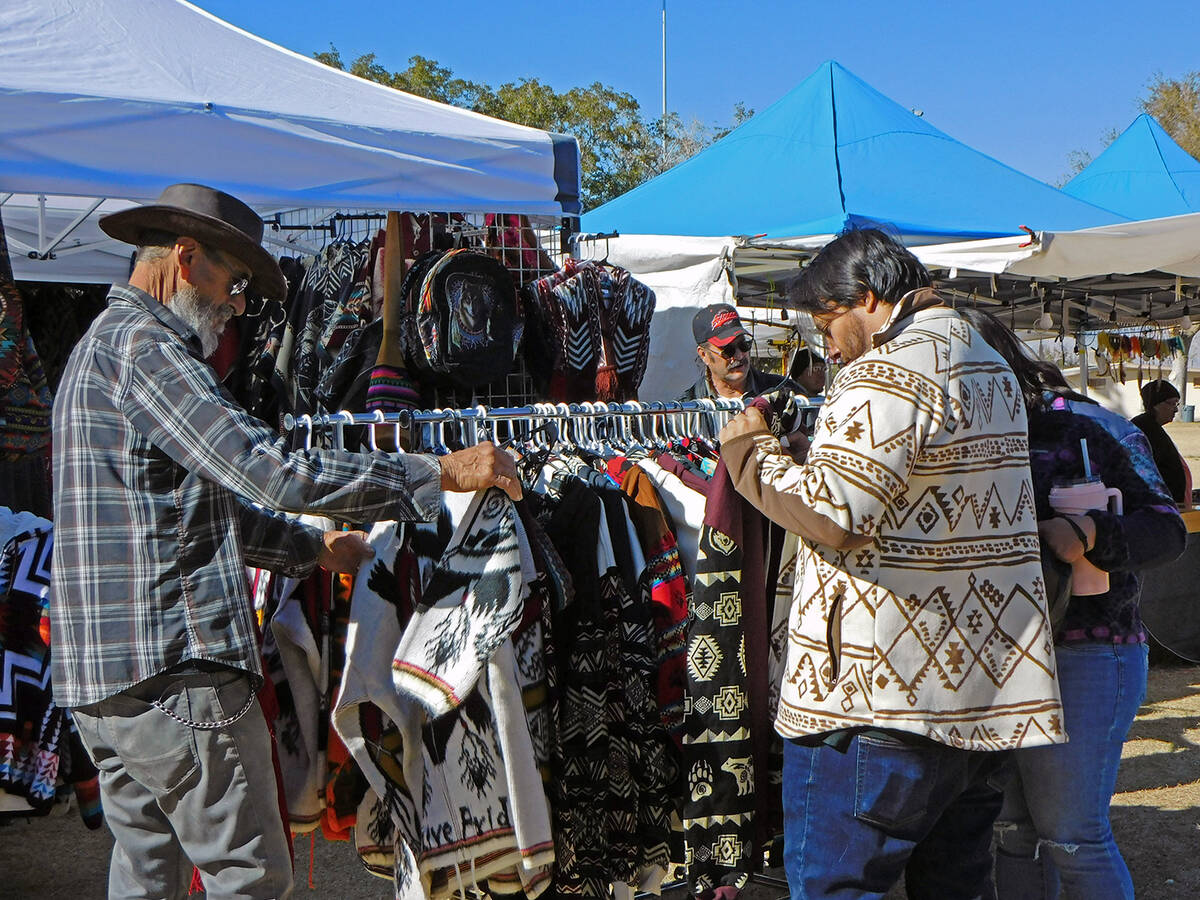 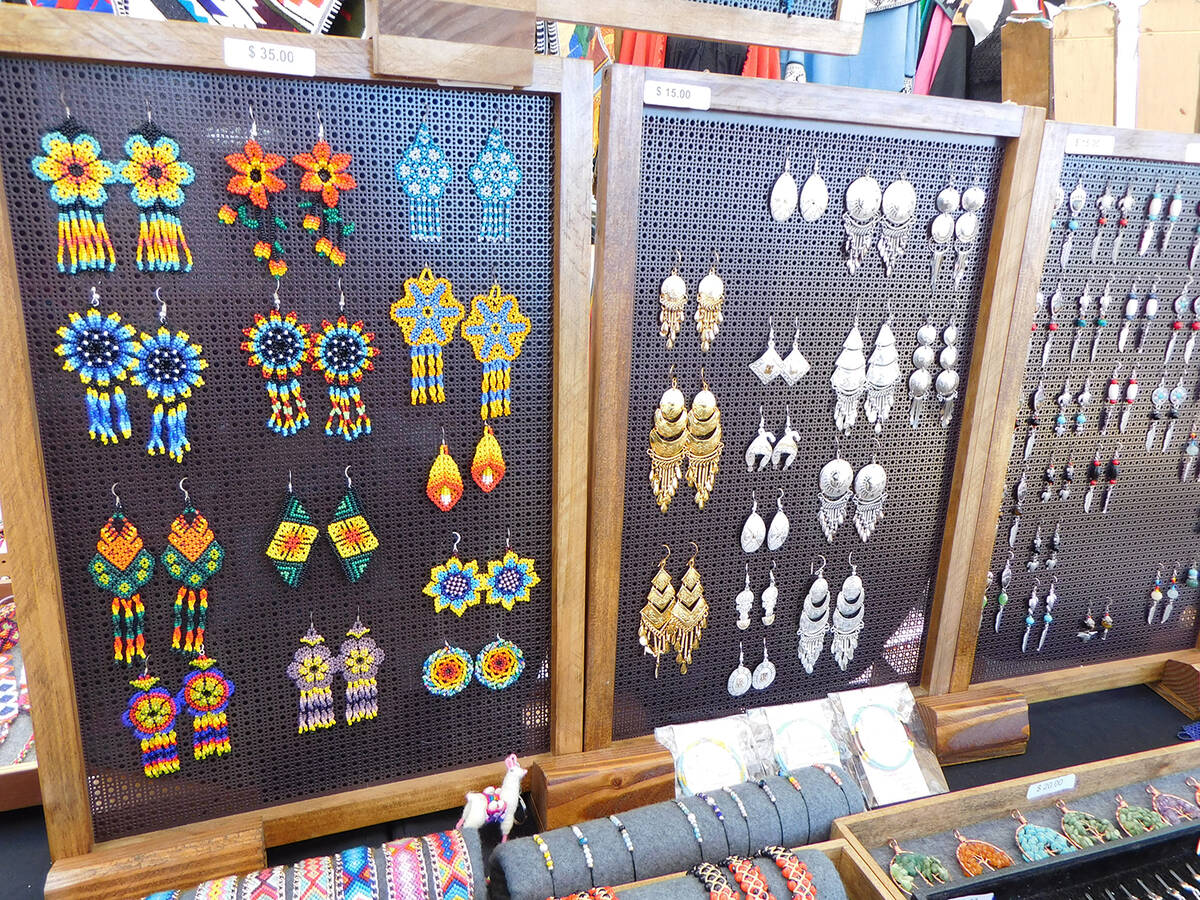 Robin Hebrock/Pahrump Valley Times Handmade jewelry is just a small portion of the merchandise and crafts that were available for purchase at the Pahrump Social Powwow. 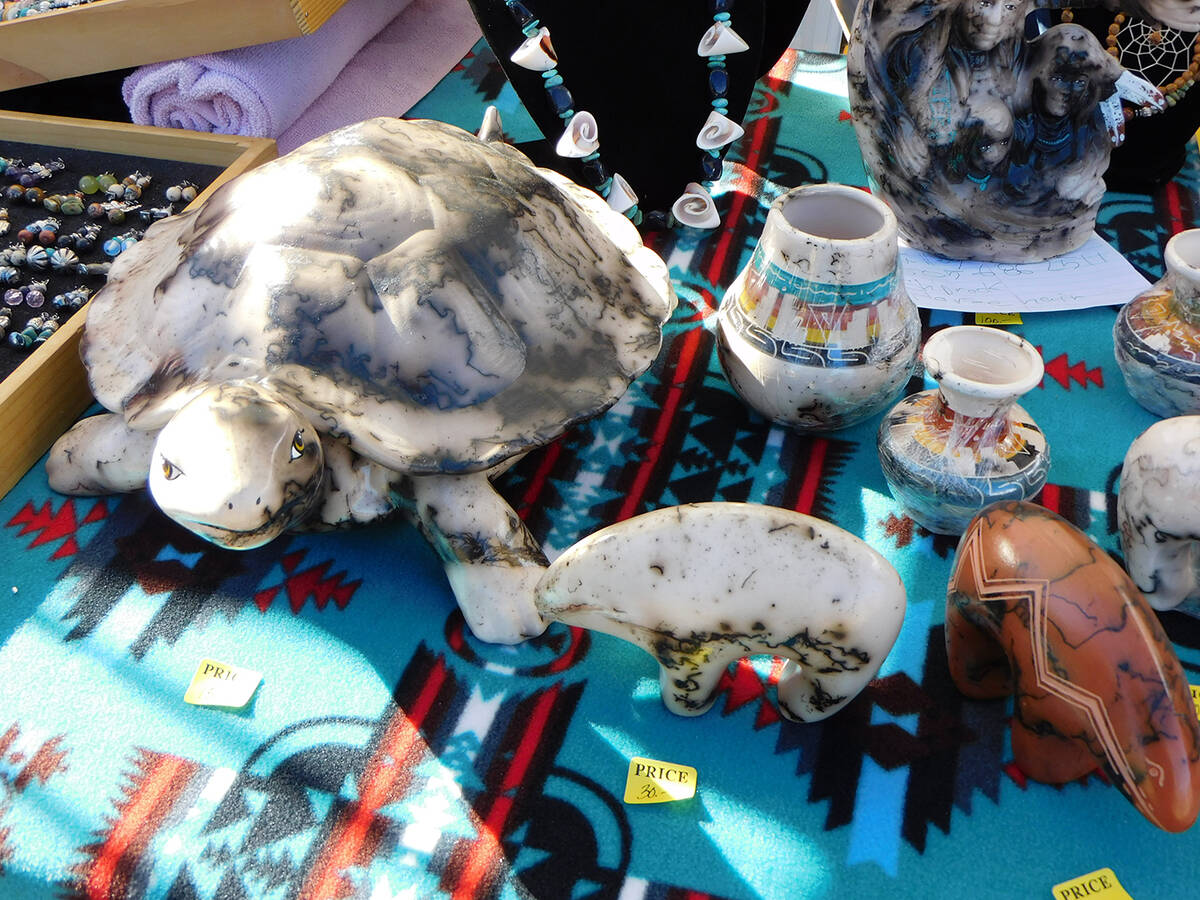 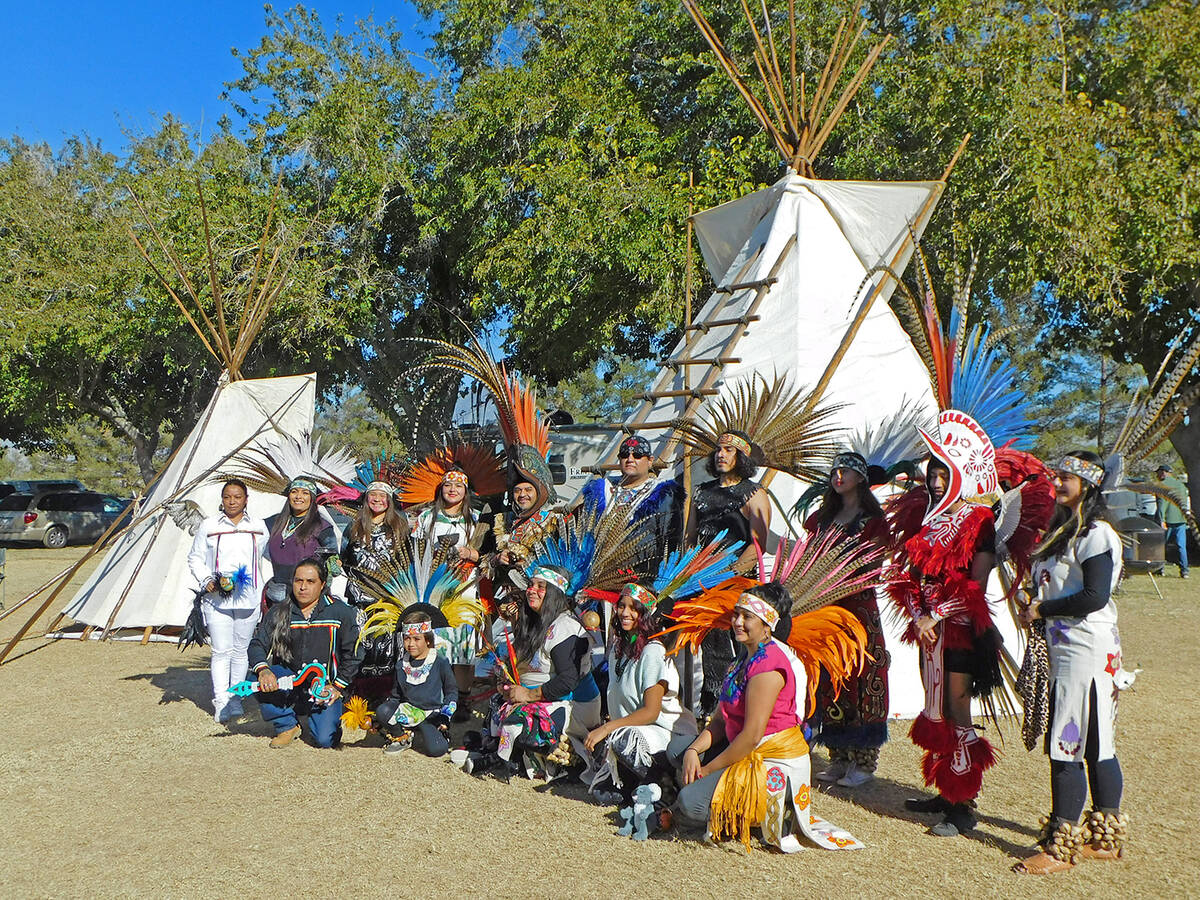 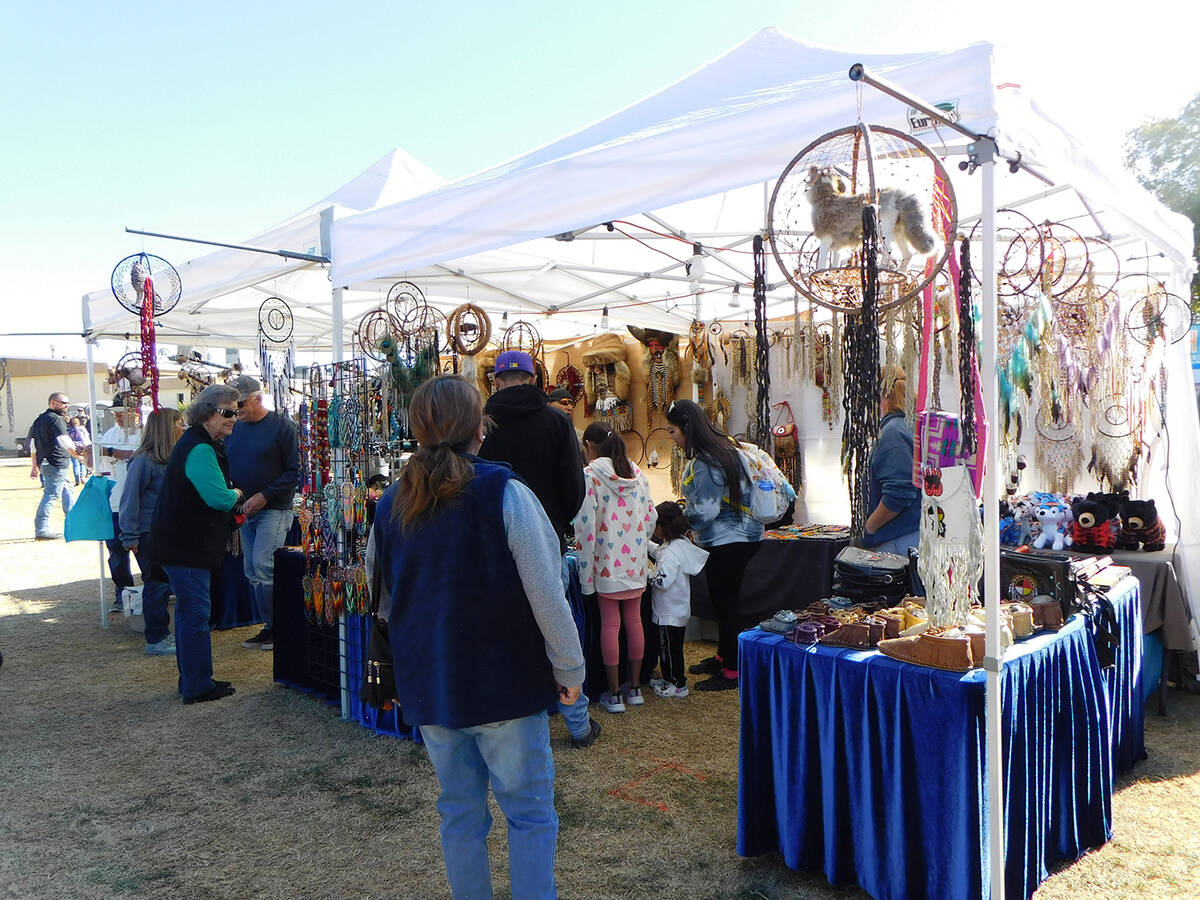 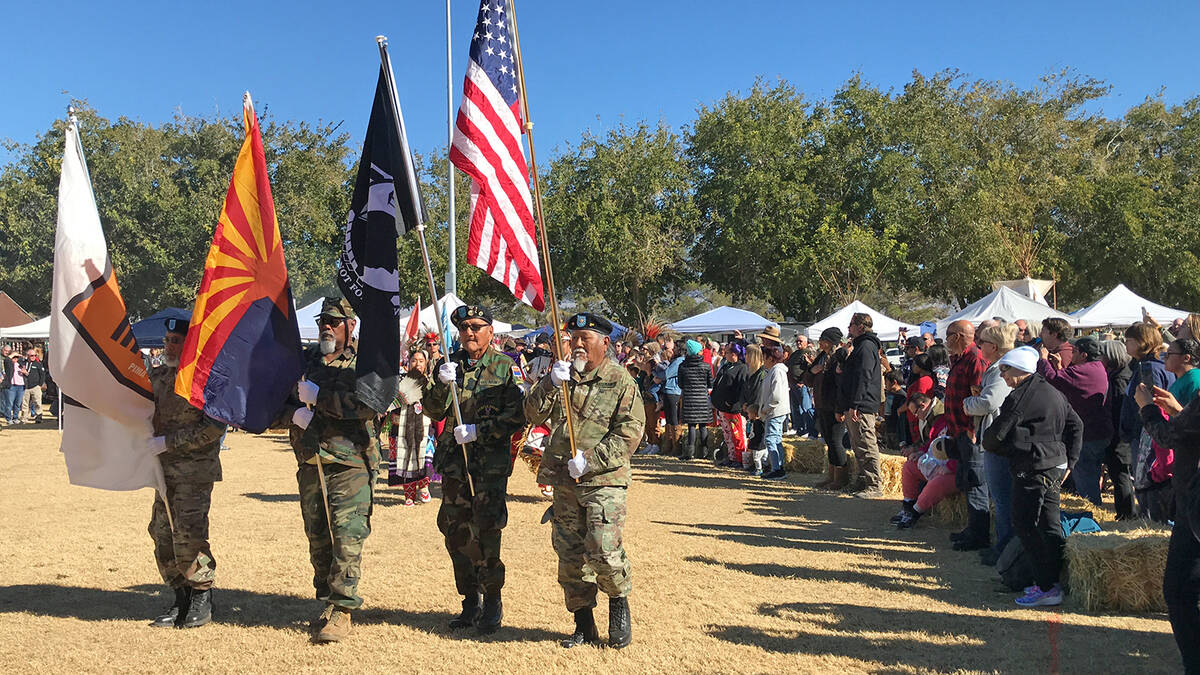 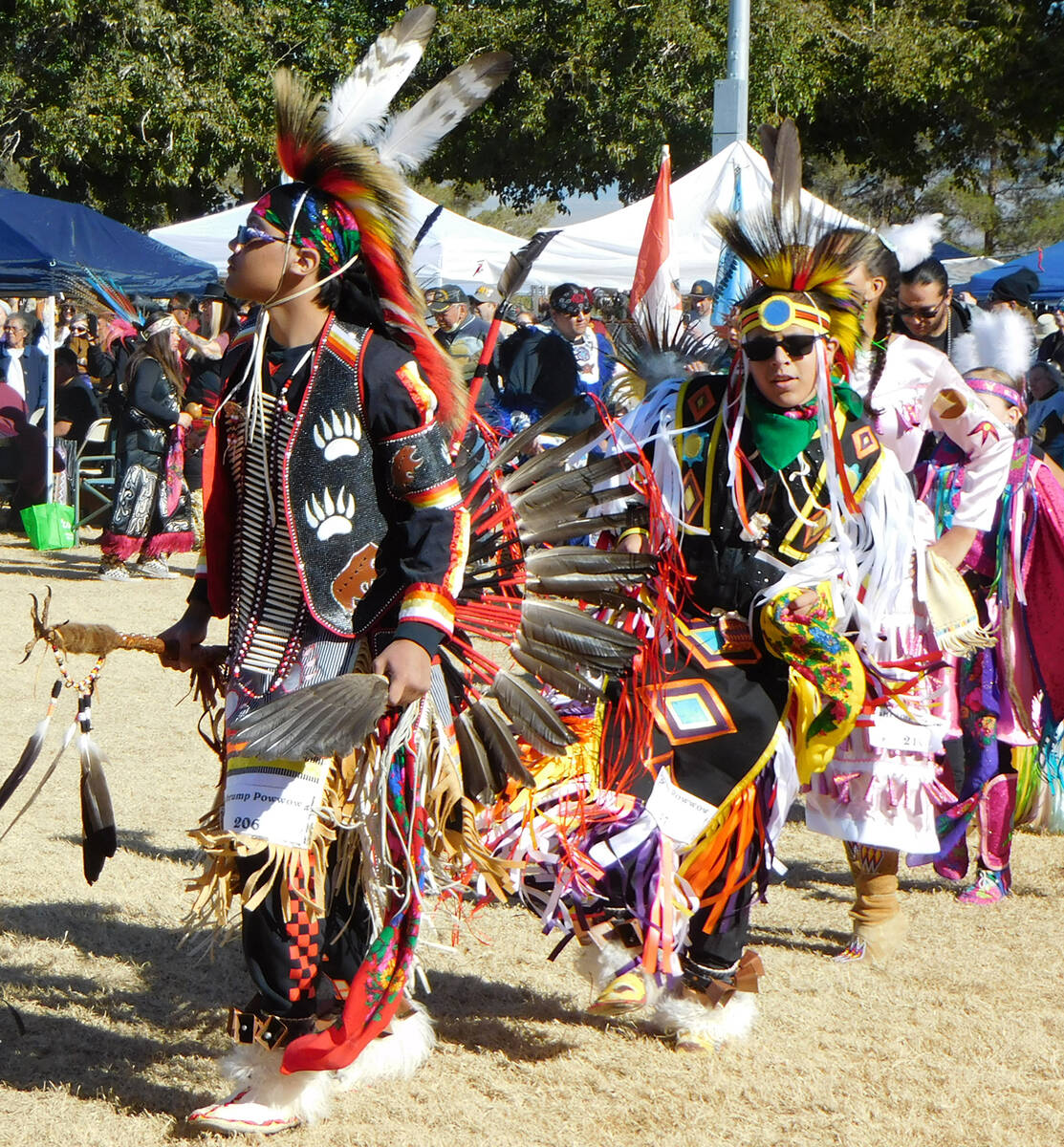 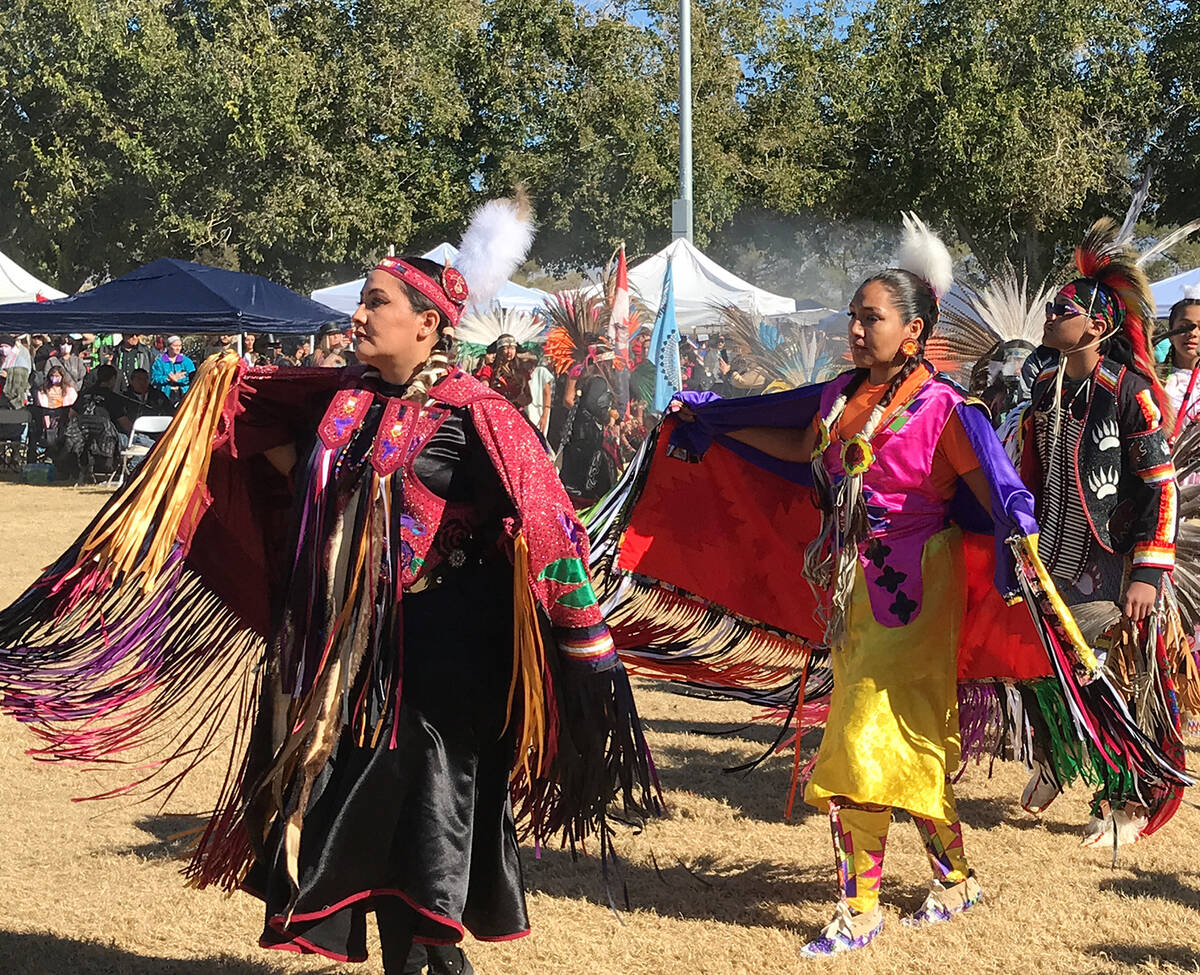 November is National Native American Heritage Month and there is no better time to highlight customs of the country’s indigenous peoples, whose roots go back thousands of years and whose traditions and history still run deep.

For the past 23 years, this month-long observance has been marked in the Pahrump Valley with an event aimed at educating all people about the incredibly rich culture of America’s many and varied tribes, the Pahrump Intertribal Social Powwow.

Organized by the Pahrump Social Powwow Committee, the event is a highly-anticipated part of the the valley’s entertainment schedule, regularly drawing crowds. Hundreds inundated Petrack Park over the weekend of Nov. 18-20 to indulge in music, dancing and storytelling, as well as the foods and crafts featured at vendor booths.

“The committee was very excited with how well the Powwow went,” Powwow Committee member Paula Elefante, who has been working on the Powwow for 20 years, told the Pahrump Valley Times. “The Hummingbird Singers, our host Southern Drum, came back this year and they have been here four times over the past seven years! Bear Springs, our host Northern Drum, was there for the very first time and we had a third drum that came with the Head Gourd Dancer, Dean Webster.

“This year we had a Head Man Dancer, Robert Piper, and a Head Woman Dancer, Maxine Orozco,” Elefante continued. “We were honored to welcome back Michael Reifel, this was his 11th year as master of ceremonies and he has accepted our invitation to come back next year too. Also, Marvin Redeye, who has had a vendor booth in the past, has been our arena director of eight years and was back for us once again.”

Elefante noted that the committee was quite excited by the addition of a second tipi to the Pahrump Social Powwow this year, which provided a perfect venue for exhibiting items that have a profound significance for Native Americans. Inside of the smaller tipi, measuring 12 feet in diameter and erected with 16 foot tall poles, were a drum, war bonnet, breast plate, buffalo skull, large cowhide, beaver skin, several pieces of pottery, a knife and a waterfall rattle. The larger tipi, utilizing 18 feet poles and measuring 24 feet in diameter, was set up to offer activities for the younger set as well as storytelling throughout the day.

With an event like the Pahrump Social Powwow, which offers free admission to all, calculating an exact number of attendance is nearly impossible. However, the Powwow Committee was confident in estimating that around 1,000 people made their way through the park over the three-day event, with Saturday being the busiest day.

With an event like the Pahrump Social Powwow, it truly takes a “tribe” to make it a success and Elefante took the time to shine the spotlight on all those who contributed to this year’s event.

“I also want to extend a big thank you to the committee, sponsors and the community for making this another great year. My first year doing the Powwow was in 2002 and I have had the pleasure of working with many awesome people over the years,” she concluded. “This year’s committee members are Ron Galbraith, Barb Blitz, Manny Riviera, Doris Smith, Bill McClelen, Sue Zink, Jim Hannah, Rose Humbert, James Rentz, Gayle McCaslin, Laurie McCaslin, John O’Brien, Pete Whitehorse, Carleen May and Thomas Allison. They are all my heroes!”

The Pahrump Intertribal Social Powwow is also slated for the weekend before Thanksgiving. The 2023 event will take place Nov. 17-19. For more information or to contact the Powwow committee visit www.PahrumpPowwow.com