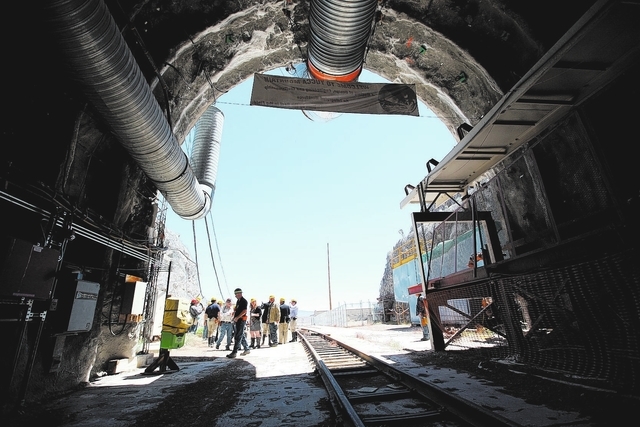 The renewed political fight about storing nuclear waste at Yucca Mountain has spilled over to the op-ed pages of the Washington Post, one of the nation’s most politically influential newspapers.

One of the people joining the fray is Nye County Commissioner Dan Schinhofen, who has long advocated for Yucca Mountain as a source of revenue for the county, where the site is located.

On Feb. 8, the Washington Post Editorial Board released an opinion piece “Back to Yucca Mountain,” called “Nevadans’ intense opposition to the Yucca project is unreasonable, unambiguously harmful to the country and should end.”

The newspaper cited the Nuclear Regulatory Commission report released in January stating the site could be safe to store nuclear waste.

“In a rational world, the NRC’s report would result in Nevadans backing down, Congress restoring funding and the Obama administration pushing Yucca along,” the editorial board wrote.

The opinion piece prompted a scathing rebuttal published by the Washington Post from Gov. Brian Sandoval, as well as U.S. Sen. Dean Heller and Harry Reid.

The letter attacked the newspaper’s editorial “grossly trivialized Nevada’s valid technical concerns” while “overstating” the report’s findings. The letter argues that the continued focus on Yucca Mountain as a solution only moves the “nation further away from a real solution.”

“With its inaccurate arguments, the editorial epitomized the arrogance of a federal government effort to force a nuclear waste repository on an unwilling state,” said the Sandoval/Heller/Reid letter. “Nevada’s resistance to the Yucca Mountain repository is based on legitimate concerns for the safety of our citizens and the environment. The project has not proved to be safe or even workable.”

The letter referred to Obama’s Blue Ribbon Commission on America’s Nuclear Future report in 2012 that recommended, in part, that nuclear waste facilities should only be in states that give their consent.

While the state’s governor and two U.S. senators argued on behalf of the state, Schinhofen made it clear in the Washington Post that Nye and other rural counties hold a different opinion.

The county commissioner pointed to resolutions passed by nine of Nevada’s 17 counties calling for completion of the project’s license review process.

We appreciate the (Washington Post) editorial, which we hope will stimulate a discussion based on science and the law and not on fear-mongering,” said Schinhofen, adding that “those of us who live closest to the site have conducted our own studies about the aspects of safety” of the Yucca Mountain repository, and those “findings agree with the unbiased professionals … that the repository can be built and operated safely.”

“Together, we will continue to fight Yucca Mountain at the state and federal levels,” according to their letter. “This is not a partisan issue; this is a Nevada issue. Nevadans will not be swayed by a D.C. newspaper’s editorial board. It is time that we all recognize that Yucca Mountain is an unworkable and unsafe option and look toward responsibly and scientifically securing our energy future.”

Schinhofen’s letter stated that those three are not speaking for everyone in Nevada.

“Many Nevadans who support Yucca Mountain look forward to being heard,” Schinhofen said.

More than $15 billion in federal funding has been used in researching and developing Yucca Mountain. Obama ended the project’s funding after being elected in 2008, pushed by then Senate Majority Leader Reid, who helped swing Nevada during the presidential election.