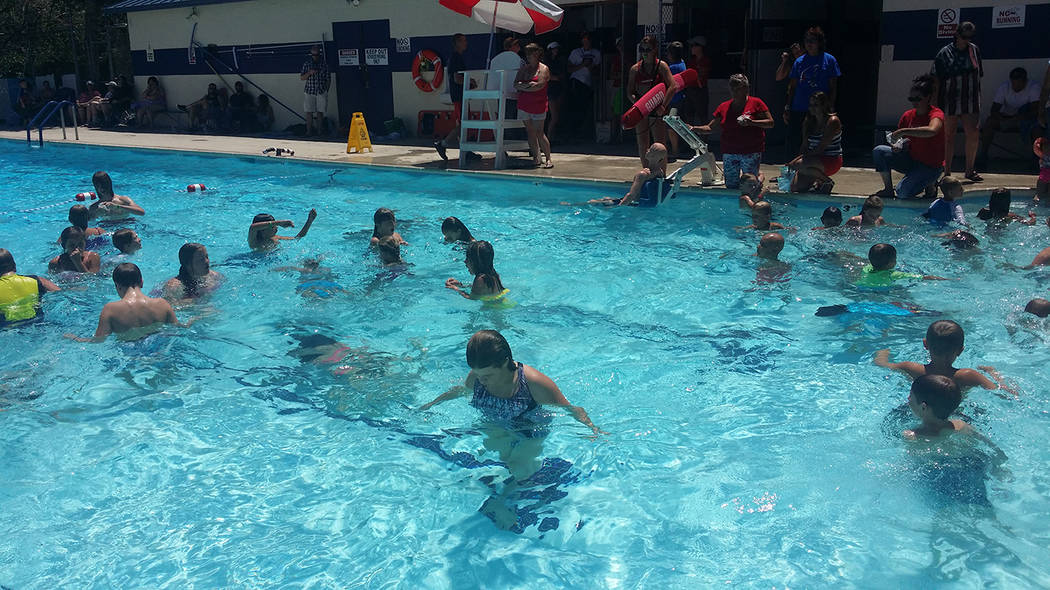 David Jacobs/Pahrump Valley Times The Tonopah Memorial Swimming Pool in Barsanti Park at 611 Bryan St. could see intermittent openings through June. A new heater for the pool hasn't arrived, and the public facility can only open if waters hit at least 77 degrees; potential swimmers can watch for updates on social media or contact the town office. 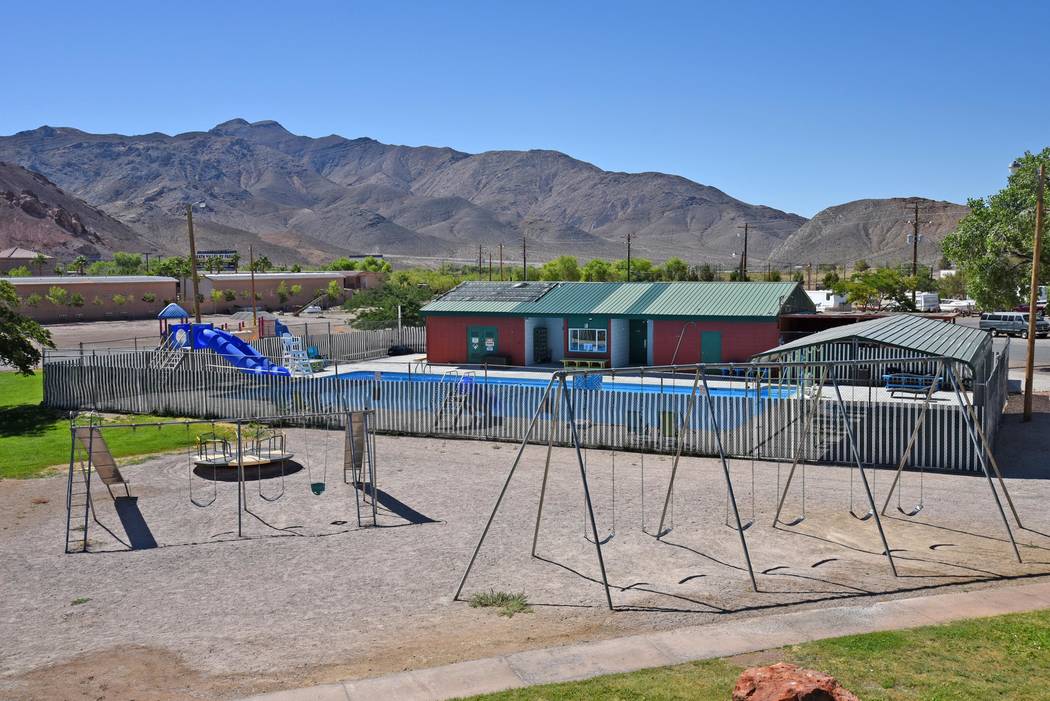 David Jacobs/Pahrump Valley Times The Beatty public swimming pool in Cottonwood Park on June 20, 2018. The pool is currently closed due to a staffing issue and no specific re-opening date has been set.

Towns across Nye County are running into issues with opening area pools for the 2018 season.

Reports on social media in mid-June pointed to Beatty’s public pool in Cottonwood Park being closed. A freelance writer for the Pahrump Valley Times reached out to officials from the Beatty General Improvement District’s board of directors, who said the pool is closed due to a staffing issue, though a clear answer on when the pool will be operational has still not been obtained. The improvement district heads the public pool’s operations.

Officials for the improvement district’s board said the agency is seeking lifeguards at the public pool. The news came as meteorologists from the National Weather Service in Las Vegas were predicting Thursday to be the hottest day of the year with temperatures potentially reaching 106 degrees—topping June 13, when the area hit 101 degrees, according to the weather service. There are no other public pools in the Beatty area; however, some local hotels and motels have pool facilities, though they may not be open for public use.

The Tonopah Memorial Swimming Pool in Barsanti Park at 611 Bryan Ave. had its opening date pushed forward due to the pool’s heater failing and recent announcements call for further delays. The pool, however, is set to be open intermittently if the water reaches the minimum temperature required by the health department. According to staff at the town of Tonopah office, the pool was to open on a limited schedule, noon to 6 p.m., Thursday through Saturday. That’s if the water temperature holds at 77 degrees or higher, a health department requirement.

The pool will open for family and open swim only. In Tonopah, temperatures are projected to range from the high 80’s to the low 90’s for a high at the Tonopah Airport weather station, according to the National Weather Service. That’s still lower than June 13, when a high of 96 degrees, the hottest day in 2018, was recorded at the airport in Tonopah, according to data from the weather service.

Chris Mulkerns, administrative manager for the town of Tonopah, said in an email that the estimated ship date on a replacement pool heater was shifted from June 13 to June 29. “In the meantime, our pool staff will monitor the water temperature as the days (and nights) get warmer and we will notify folks via social media, our website, and our reader board if and when the pool will be open,” Mulkerns said.

Mulkerns said potential swimmers can also contact the town office for information. The main line for the town office is 775-482-6336 or email is townoftonopah@frontiernet.net Mulkerns said she appreciates everyone’s patience during the delay. The pool was supposed to open in the second week of June.

The cost of the new heater is estimated to be about $10,000 and funding is coming from the town’s maintenance budget. The pool is scheduled to stay open for the season until school gets back into session, according to Mulkerns. A renovation project to replaster the pool was underway in spring 2016. Prior to that, the pool was replastered in 1991.

The pool’s daily rates for swimmers are $5 for adults and $2.50 for children, ages four to 15. Children ages three and under swim for free.

The normal hours of operation for the season are from 7 a.m. to 9 p.m., Tuesday through Saturday. Normal hours of operation for open swim start at noon and run through 4:30 p.m. On those days family swim hours are scheduled for 4:30 p.m. to 6:30 p.m. on Wednesday and Friday and Saturday. On Tuesday and Thursday, family swim time runs from 4:30 p.m. to 7 p.m. during normal operating hours. For more information on times and fees or restrictions to use the Tonopah Memorial Swimming Pool, head to the town of Tonopah’s website at tonopahnevada.com and click on the parks and recreation tab.

Beatty residents could dive down to Pahrump for a swim. No announcements have been made by officials on any issues with pool facilities in Pahrump.

Pahrump’s community pool at Petrack Park opened at the end of May. Petrack Park is located at 150 N. Highway 160 with a general admission cost of 50 cents per day. The pool’s hours for adult swimmers, individuals 21 years of age and older, go from 7 a.m. to 11 a.m. seven days a week. Open swim times run from noon to 6 p.m. every day during the season as well.

According to information on Beattynv.info, Beatty’s public pool also operates seven days a week, from 11 a.m. to 6:30 p.m., during normal operating hours.

Rates vary, but children zero to 3 years old swim for free; kids aged 4-12 have an admission fee of $1 for the daily rate. For those 13 years of age or older, daily admission to Beatty’s pool is $2. The daily rate for senior citizens is $1.50.