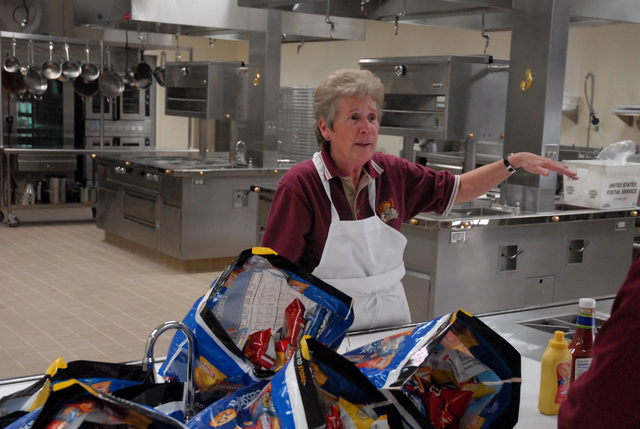 Jan Rubin was described as a talented substitute teacher who was the go-to teacher when a long-term substitute was needed, according to Principal Chris Brockman of Pahrump Valley High.

Rubin passed away due to complications from cancer on April 17 while in hospice care.

She was 68 at the time of her passing and had taught at the high school since 2007. Rubin worked up until the week she died. Brockman said she was a definite member of school staff.

“She taught many different subjects throughout the years that I have known her,” he said. “She was a go-to person if we needed something done or if we needed help someplace, all we needed to do is ask her.”

Joanne Baumgarten, administrative assistant to Sonja Miller, assistant principal, said she saw Rubin every day for a full year because they had the same lunch.

“I could see she really cared for the kids she taught,” Baumgarten said. “She was a really caring person and very dedicated to teaching and she always had a smile on her face.”

According to the school, there will be a celebration of life for the teacher on May 6 at 6 p.m. in the high school courtyard.

The principal said all the kids seemed to know who she was, despite being a substitute teacher. Rubin was far from being just an ordinary substitute.

Unlike many substitutes trying to become teachers, Rubin was a retired teacher from Florida where she taught for more than 30 years. While a regular teacher she taught a culinary arts program and was a softball coach.

In 2012, PVHS received a new state-of-the-art kitchen for teaching culinary arts. The school didn’t have a teacher and so they turned to Rubin.

At the time, she was described by the PVT as being a kid in the candy store.

“She was proudly showing and describing what her students were using to prepare meals…” At the time she was just as excited to teach the class as the students were about learning and this excitement she had for learning was so often translated to the kids.

“She loved the kids and the kids knew that,” Brockman said. “She taught the culinary arts class for a whole year. She never turned me down when I asked her for help and she was a super lady.”

The main thing Brockman liked about her, along with many of the staff and students at the school, was her attitude.

“She always had a smile and a kind word,” the principal said. “She was also very professional in the way she conducted herself.”

Rubin even spent most of her time volunteering at the high school for sporting events and other extracurricular activities.

On any given season she would be seen operating a scoreboard, taking tickets at the gate or just on the sideline cheering.

Brockman said about four years ago before softball Coach Elias Armendariz took over, the girls needed a short-term coach and Rubin volunteered.

Also in 2012, Rubin adopted the girls state championship soccer team. She was seen at all their games and became good friends with many of the seniors and juniors on the team. Sydney Sladek and Jennifer McCaw were two such girls who are now freshmen in college.

“I know for a fact that whoever had the opportunity to get to know Ms. Rubin can say that she changed their life,” Sydney Sladek said. “She taught others and especially myself that you can accomplish anything you want. She had complete faith in all of her students and lived life to the absolute fullest.”

Joe Sladek, Sydney’s father and coach, said she was a wonderful lady.

“She was always on the field taking care of the girls,” he said. “She followed a group of girls from the 2012 soccer team and was like a team mother to them.”

Sladek’s wife, Marcia, also got to know Rubin as a dear friend. She fondly remembered her last conversation with her.

“I had the pleasure of having lunch with Jan several months ago,” Marcia Sladek said. “After lunch she persuaded me to stay for coffee and dessert. I’m so glad I did because it was then that she shared her passion and involvement for equality in women’s sports in the late 1970’s.”

She recalls just talking with her about her love of athletes at PVHS and her travels with her best friend. Marcia said the last text she got from her was about going to see Jennifer McCaw’s college softball team play.

“She was a role model and an inspiration to all our young athletes and she will be missed,” Marcia Sladek said.

Howard Wick, a substitute teacher and friend of Rubin, has known her for the past seven years and said she was born and raised in Oklahoma, and has a surviving sister.

“I knew her for a long time and she loved all sports,” he said. “She was sick for a bit but never let on that she was really sick. She was always cheerful during the illness.”

Howard knew for a fact that she loved teaching.

“She taught because she truly loved to teach,” Wick said. “She didn’t do it for the money.”