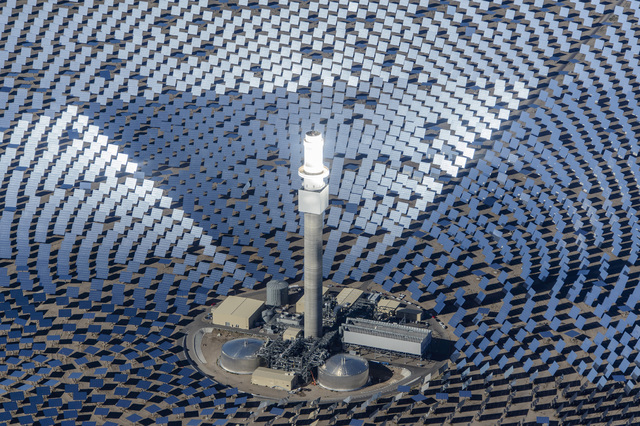 A prairie falcon has been injured by the Crescent Dunes Solar Energy Plant in Tonopah, the U.S. Fish and Wildlife Services confirmed. On July 20, a monitoring crew found the bird with melted feathers and wounds on the skin in the solar field after it couldn’t fly. Courtesy of SolarReserve

TONOPAH — A prairie falcon has been injured by the Crescent Dunes Solar Energy Plant in Tonopah, the U.S. Fish and Wildlife Service confirmed.

On July 20, a monitoring crew found a bird with melted feathers and wounds on the skin in the solar field after it couldn’t fly.

“We’ve been notified about the falcon and based on the observed injuries, we suspect that it’s been exposed to solar flux at the Crescent Dunes,” said Pamela Bierce, public affairs officer at the U.S. Fish and Wildlife Service Pacific Southwest regional office.

The bird is now in rehabilitation, Bierce said.

“We haven’t heard anything further regarding condition, or if the bird is still there,” she added.

“We have independent environmental scientists on site every day. The environmental consultants monitor the tower area with high-powered binoculars during operations,” Grikas said.

It was these scientists who found the injured bird and brought it to the rehabilitation center in Bishop, California.

The Crescent Dunes delivered its first megawatts to the grid during a test run in October, 2015.

According to the latest summary report conducted by independent environmental scientists from March 1, 2015 through March 1, 2016, there have been 80 avian mortalities at the Crescent Dunes facility and in a buffer zone, a two-mile radius outside the facility’s boundary.

The highest number of mortalities, 42, occurred in the heliostat field, where tracking mirrors called heliostats follow the sun throughout the day and reflect and concentrate sunlight onto a receiver at the top of a central tower.

The mortalities occurred largely due to bird collisions with buildings, transmission lines and equipment related to the project, Grikas said.

“About 8 of the 65 (mortalities) were (dead) due to natural predation. There was a total of 15 avian mortalities discovered outside of the facility in the buffer zone. With 8 mortalities attributed to solar flux over the 12-month period, the project’s solar flux around the tower has proven to be a low risk to birds,” she said.

SolarReserve has undertaken a number of measures to mitigate any potential avian impacts from Crescent Dunes, officials said.

In addition to proper site selection and revised heliostat pointing algorithms, SolarReserve, in consultation with the Bureau of Land Management, Nevada Department of Wildlife and the U.S. Fish and Wildlife Service created an Avian and Bat Protection Plan (ABPP) that is intended to reduce the potential for avian and bat mortality, report and isolate events if mortality occurs and assist in compliance with applicable laws and regulations.

The facility is required to perform monthly mortality surveys and report results to the BLM and NDOW.

If an avian mortality is encountered, the protocol is to photograph, put a Global Positioning System tag on the body and report it to the on-site biologist.

In January 2015, SolarReserve engineers developed operating procedures to spread out the standby mirror pointing in a distributed shape or pattern covering several “football fields” of space just above the tower, so that no single point in the sky has a high enough level of concentration to be of risk to birds.

As a part of the BLM’s right of way stipulations, independent on-site inspectors, including biologists who report directly to the BLM have been on site daily since the start of construction.

Renewable energy has been repeatedly criticized for its negative impact on wildlife, especially birds.

Grikas, however, said that as a low-emission, low-pollution energy source, the wider use of solar energy can save wildlife and birds as it displaces the more harmful sources of electricity.

“Our zero emissions solar-energy technology uses zero fossil fuel and includes innovative energy storage technology. It is a viable alternative to fossil-based electricity generation since it is able to operate reliably day and night, with the potential to meaningfully reduce reliance on fossil fuels and the associated carbon pollution, so that humans and birds can both thrive together in a world affected by climate change,” Grikas said.

Grikas said as with any industrial facility built by man, the Crescent Dunes facility will have a number of bird mortalities each year.

“Bottom line to date, monitoring by the third-party biologists have reported avian impacts at Crescent Dunes as quite low,” Grikas said. “We will continue to rigorously monitor bird mortality, and work closely with all stakeholders.”