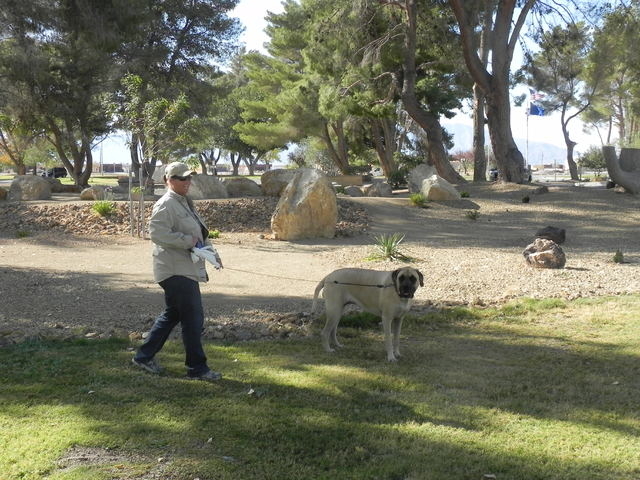 A recreational trail on the Calvada Eye is one of the projects vying for federal Community Development Block Grant funds that will be considered by Nye County Commissioners next month.

The reopening of the Gabbs swimming pool, a series of mountain bike trails around Beatty, solar street lighting and a new parking lot for the county complex at the Calvada Eye and rehabilitating the Beatty Water and Sanitation District offices are also vying for the two applications Nye County can submit to the state.

The block grants are administered by the U.S. Department of Housing and Urban Development. They are intended for low to moderate income residents. The Governor’s Office of Economic Development administers the program in Nevada, awarding annually $2.2 million to $3 million in grants on a competitive basis to 26 cities and counties not automatically entitled to the funds, those under 200,000 population.

In March 2010, county commissioners voted 3-2 to apply for a $200,000 Nevada Recreational Trails Program grant, to build walking trails and install xeriscaping at the Calvada Eye, but they were turned down. That project would’ve removed existing turf and replaced it with red yucca trees, Joshua trees, desert spoons, agave plants, ornamental grass and boulders. The recreational trails would have been about 2,970 feet.

Nye County Planner Cheryl Beeman told commissioners Wednesday the Calvada Eye is a focal point of the community. The county bought the 33-acre property for $3 million in 2004. Since then, the county has assembled the administration building which opened in 2010 and the Health and Human Services Building later. The modular buildings for the One Stop Shop, which will house planning, building and safety, are waiting to be assembled.

The county renovated the duck ponds on the Calvada Eye, putting in rock features and built picnic tables and chairs. The Calvada Eye is a popular place for people to walk their dogs.

“As the Calvada eye continues to develop into a very important central feature of our community, the walking trail concept for this property has developed and the purpose of the trail is to connect our government facilities,” Beeman said.

Beeman touted the health effects of walking on trails. The other important feature is to reduce water usage, removing turf and creating a showcase of xeriscape landscaping, she said.

“This project has been ongoing or has been in our thought processes for quite a number of years,” she said.

The plan is to seek a $150,000 grant to create two pedestrian foot paths 7,075 feet long, with the Calvada ponds as the center. The application states Pahrump residents have limited access to trails for hiking. A preliminary reuse plan for the Calvada Eye was drafted in 2005 using a Brownfields Program grant, in which development of a portion of the property for recreational use received the highest support, in particular a walking trail, in a county survey. The original Pahrump master plan called for the development of a pedestrian-friendly town center zone around the Calvada Eye.

Nye County Grant Manager Julie Carlo said Pahrump as a whole doesn’t meet CDBG income guidelines. But she said county staff worked closely with the CDBG staff in Carson City to make the Calvada Eye eligible under the requirement that projects benefit communities and neighborhoods where at least 51 percent of the residents have annual household incomes of 80 percent or less of the median income for the county.

The county also wants to submit an application for $182,000 to $195,000 to replace 38-year old street lights with solar-powered LED lights along Calvada Boulevard from Highway 160 to the Calvada Eye. That section is due for a street rehabilitation project approved by the Nye County Regional Transportation Commission. The lights would be installed on existing poles, Nye County Public Works Director Dave Fanning said. He added the Calvada Boulevard rehabilitation project will include bike trails.

“If you’re there early in the morning or late at night the public is very hard to be seen when you’re walking around that park. It is not lit as good as it should be,” Fanning said.

County Commissioner Frank Carbone hinted at his priorities. “The walking trails are a want, the lighting is a need.”

Still a third Calvada Eye project includes paving curbs and gutters to control drainage, paving a new 651-foot by 65-foot parking area and traffic signage on the southeast corner. The county is requesting $327,000 for that. Nye County Public Works will contribute $112,559 worth of in-kind labor to prepare the sub grade and transport the material.

Nye County Manager Pam Webster said the improvements would provide an opportunity for hosting events like a Farmers Market, which commissioner Dan Schinhofen has talked about moving from its present location in the Home Depot parking lot Saturday mornings.

Among the other requests:

• Cimarron Chacon, a St. George, Utah-based consultant for STORM-OV Inc., asked for $150,000 to pay half the cost of a phase 1 project designing and constructing recreational trails and facilities, part of a long-term economic diversification strategy to increase tourism. Ultimately proponents would like to complete 300 to 500 trails in Oasis Valley for mountain biking, hiking and running including signage, trailheads and visitor maps.

“The town of Beatty is in an economic state of decline. The legacy industry of mining is no longer generating any economic opportunities to sustain the community. There is currently very little economic diversity to attract new residents and tourists,” Chacon said.

When the Tough Mudder competition was held in Beatty it brought in 7,500 participants and $5.25 million in benefits to the state, Chacon said.

• Gabbs Town Board Chairman Janice Lyman asked for $49,500 to repair the municipal swimming pool which has been closed for three years. She described it as “gummy, slimy, nasty gunk.”

“Our pool has been closed far too long and it’s created a huge void in the lives of the Gabbs residents,” Lyman said. “The majority of Gabbs residents love their community. It is a very small community and can often seem isolated and forgotten.”

The swimming pool will create some recreation for local youths as well as the nearby Yomba Indian Reservation and Reese River Valley, she said.

Webster said a number of items have to be done to open the pool, but the town board has been working diligently on it.

• Rob Shirley, the new general manager of the Beatty Water and Sanitation District, asked for $75,000 to make their offices at 401 W. Main St. compliant with the Americans with Disabilities Act, a requirement by the U.S. Department of Agriculture to receive grants and loans.