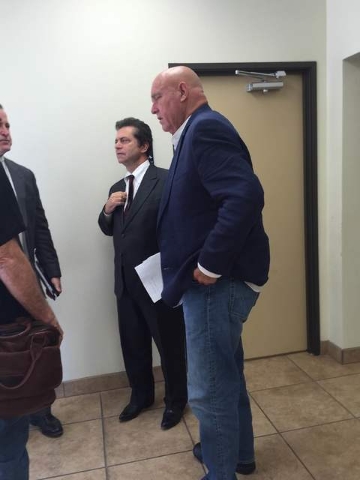 Dennis Hof (pictured left) speaks with members of his legal council including Mark Riseman (middle) after the Nye County board of commissioners decided to postpone item on possible brothel code changes until its Sept. 20 meeting. Mick Akers/Pahrump Valley Times

Any possible changes to Nye County code related to prostitution will not be introduced until the Sept. 20 county commissioners’ meeting in Tonopah.

The decision came Tuesday morning after commissioners decided that last-minute business impact statements from brothel owners received over Labor Day weekend needed to be included in the packet, along with some updates to the county’s proposal as well, before any changes to Nye County Code 9.20—prostitution could be recommended.

“I think we should table this item because I haven’t had a chance yet to view them,” said Lorinda Wichman, county commissioner.

The board decided to push back the meeting a few more weeks despite the fact that the impact statements were supposed to be in by July 13.

One brothel owner who did not submit a business impact statement as of the meeting Tuesday was Dennis Hof.

Hof was present at the meeting with his legal team in tow and they said that a statement would be submitted by the 5 p.m. deadline, in order to be featured on the Sept. 20 agenda.

“The reason it hasn’t been turned in today is they gave us until July 20, but also what they didn’t say is that they decided to have a meeting in August where we all met in a round table,” Hof said. “So it wouldn’t have been worth the table we typed it on until we all met and came to some conclusions of where we’re going and what we can’t work out, that we want to deal with in this forum.”

Two brothel owners submitted their impact statements in the past few days and when Hof saw them he had a difference of opinion on various points in those documents.

“When I saw what they had both written up, I didn’t totally agree with it,” he said. “So I want to bring in my own counsel. As soon as he reviewed it he said, no, we have got to do our own… They have different concerns than what I have.”

The proposed changes, which will duplicate or are more stringent than federal, state or local standards regulating the same activity, include increasing several fees associated with brothels. Those fees include the quarterly licensing fee that brothels pay. Those range from raising the fee now of $1,875 to $2,500 for an operation with one to five prostitutes, a brothel with 11-and-15 prostitutes will be $7,500, and a brothel with 16-to-25 legal courtesans will have to pay a $12,500 quarterly licensing fee.

The 11-to-15 quarterly fee was adjusted from its previous number of 11-to-25 prostitutes, while the 16 to 25 prostitute fee was newly added.

Hof said that the brothel business is not an overly-profitable industry and these fee increases will affect them.

“My take on this is this, they started this business 30 or 40 years ago and they charge exorbitant rates because that’s how you sold it to the constituents. So OK, we lived with it,” Hof said. “So now, why can’t you raise it as much as the guy who owns the convenience store down the street, or the lady who owns the day care center?

Hof explained that if the fee increases came to be too high that they could eventually force him and his businesses to leave the county.

“Well, that could be,” Hof said. “It’s a lot of money. This is not an overly-profitable business in Nye County. It’s because of certain things, like we can’t allow 18-year-olds to come in there, because you have to be 21 and that takes out a large demographic.”

As it stands now, revenues for the fiscal year 2016-17 for both licenses and work cards have been budgeted at $75,000. The number was derived by adding up the number of active brothels (five) which equate to revenue increases of $9,250 per quarter and number of current active work cards for brothel workers (121). The county anticipates seeing increased revenues of $5,525 per quarter.