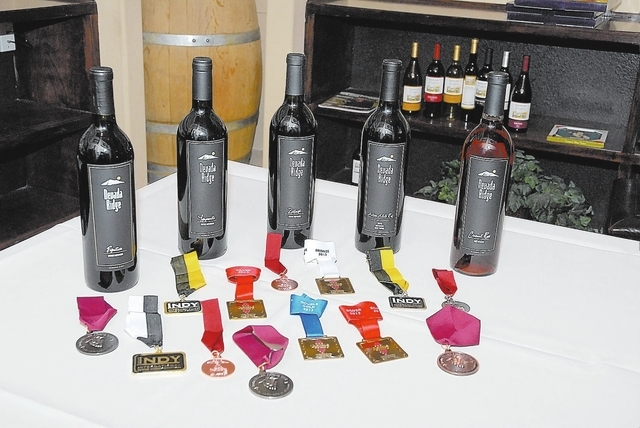 While other businesses in the valley are fighting to ride out a slowly recovering recession, Pahrump Valley Winery is set to begin construction on phase one of its expansion with work scheduled to begin in November.

Owners Bill and Gretchen Loken said the winery and Symphony’s Restaurant have experienced a boom in wine sales and, “We’re full just about every night in the restaurant,” according to Bill.

The Lokens will enclose the veranda to add climate controlled dining space to the restaurant. “It will add seating for 50 people,” Bill said.

Another expansion is in the planning stages. The Lokens just closed escrow on over 10 acres of land adjacent to the winery property. The plan calls for a portion of the parcel to be used for the construction of a warehouse. “Right now, we’re leasing warehouse space from someone else,” Bill said. “It makes more sense for us to be able to store our wines on the property.”

Although most of the traffic through the winery facilities comes from Las Vegas, Bill said a good number of visitors come from other states and other countries. “We see a lot of foreign visitors who are touring Nevada.”

The winery recently won the Nevada Treasure award for the Silver State Pioneer Territory, a contest sponsored by the Nevada Commission on Tourism. The winners were selected by the public, one for each of the six sections of Nevada.

The perks for winning include notoriety, publicity through the commission’s publication, Nevada Magazine, and a visit from Gov. Brian Sandoval, which Bill Loken said is scheduled for November.

The wines produced by Pahrump Valley Winery have become award winners, too, since the Lokens took over the winery and purchased it in 2005. Gretchen’s skill as a winemaker has shown itself in the number of awards the wines have garnered over the years. A total of 50 just for 2013, some of them are “difficult to win,” according to Bill.

The Lokens are most proud of their Nevada wines, meaning the grapes were grown in Nevada. Vineyards producing the grapes are located in Amargosa Valley and Crystal, and those wines, too, are award winners.

“We entered the Nevada wines in the competitions not expecting too much from them,” Bill said. “They were unfamiliar, no one would recognize them.”

That isn’t the case anymore. Under the Nevada Ridge label, Primitivo has taken double gold twice, meaning the wine took the gold medal in its category and another gold medal when it was compared with all the gold award winners. Another way of defining double gold is first place plus best in show.

“Primitivo is a best seller for us,” Gretchen said. “It’s wonderful with barbecue and burgers.”

Another popular Nevada wine is the Tempranillo which Gretchen said, “pairs well with chili, braised meats and smoked foods like brisket.” The Tempranillo has taken five awards this year, one of them gold.

The Silver State Red is a good all around red table wine that isn’t bold or overly tannic. It will hold to the standard of red wine with red meat, although Gretchen advocates, “Drink what you like.”

For those not comfortable with heavy, tannic wines, there is Nevada Ridge Cinsault Rose. It has slightly sweet undertones which make it a good choice for drinking alone or with fruits, tangy cheeses or with a picnic. “It really pairs well with salads, nuts and citrus,” Gretchen added.

The first Nevada wine produced by Pahrump Valley Winery was a zinfandel in 2007. Since that first bottling, the Nevada Ridge Zinfandel garnered several awards, three this year. Zinfandel is very fruit forward and pairs well with sauced dishes such as meatloaf with gravy, buttery sauces and casseroles with cheese.

Bill said, “Gretchen and I are more than pleased with the Nevada wines. We could drink anything, but by choice we drink those over everything else. They have far surpassed anyone’s expectations.”

More changes will come to the winery in January. Pahrump Valley Winery is changing its labeling. The boutique “Loken” label will disappear as well as “Villa Bianca.” Bill said, “We’ve been planning this for quite some time and will launch the Charleston Peak label in January.” Gretchen said they will wait for January to simplify the bookkeeping. “The laws governing wines can get complicated fast. In order to avoid some of that we’re going to wait.”

Along with the new labels will come the new releases which normally are put on the shelves in September or October. There will be a new Syrah, Petit Syrah and Sangiovese among others.