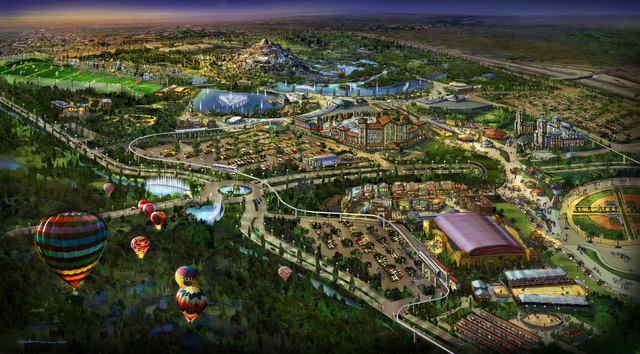 With exactly one month left until the Pahrump Town Board form of government is dissolved, board members were presented with an 11th hour bill for services on a project that essentially went nowhere.

More than three years ago, town board members approved a proposal between the Town of Pahrump and Los Angeles-based Contour Entertainment Inc., for a multi-phase entertainment and tourist destination known as “Adventure Springs.”

The Pahrump Fairgrounds on the south end of town was the proposed site for the project.

Last month, Contour Entertainment President Chris Brown submitted an invoice to the town for $20,700 for final services rendered on the project. According to the original contract between the town and Brown, dated May 6, 2011, Contour’s phase two report was one of four to be reviewed by board members as plans for the project moved forward.

To date, the town has spent more than $289,000 on areas such as build-out concepts and financial analysis for the project. For their effort, the town received artist’s renderings and reports about the scope and feasibility of Adventure Springs.

No ground has been broken.

On Thursday, Town Manager Susan Holecheck said she’s troubled by the fact the town spent more than a quarter of a million dollars and got very little to show for it.

“We received one binder containing a new 24-page recommendation, but a majority of the binder contained documents previously provided to the Town of Pahrump.” Holecheck said.

On Wednesday town board Vice Chair Bill Dolan said he thought the matter had been put to rest after a July 9 presentation to the town board.

“I thought that they had been completely paid,” Dolan said. Until they can show that they were tasked with doing A-to-M, and they completed everything from A-to-K, and now they completed K-to-M, I need to see some documentation.”

Additionally, Dolan made sure to mention that the present board had nothing to do with the Contour deal.

“This was the previous town board and town manager that commissioned this about three years ago,” he said. “I thought all the money that needed to be paid, was paid under that old town board. I think we need some documentation and we need to ask more questions about this.”

During the initial stages of the project, in 2011, at least one town board member at the time began to have reservations on whether the project was viable.

Just weeks after the May 6 agreement was signed, board member Frank Maurizio began looking into Contour and other associates involved in the Adventure Springs project.

In an email to fellow town board member Harley Kulkin, Maurizio suggested that the project will fail. He based his suspicion on a similar Contour Project more than five years ago in Texas.

“They (Contour) have a similar project in Houston, Texas that started in 2009,” Maurizio wrote. “It was supposed to be operational now but it has been reduced in size from $500 million to $200 million. With a metro population of six million people, how is one going to be successful here with a population of 30,000 in the dry dusty desert? Ultimately the town will be in too deep just like Houston. Didn’t happen in Houston and it ain’t going to happen here.”

Additionally Maurizio had reservations about the man tasked with the economic development portion of the project.

Don Holbrook was chosen by Brown during the initial stages of the Adventure Springs project.

Holbrook’s back-story can be described as dubious depending on who one speaks to.

On April 24, Holbrook was named as a defendant in a lawsuit by the City of Huber Heights, Ohio for allegedly failing to deliver on a contractual agreement.

The city, near Dayton, entered into a $66,000 contract with Holbrook more than three years ago.

Holbrook was tasked with creating an economic development business case, and to conduct a “Strengths, Weaknesses, Opportunities, and Threat” analysis of the area SWOT.

After withholding the final payment, city officials demanded a refund, which Holbrook refused the suit stated.

During an August 2012 Pahrump Town Board meeting, Brown told board members that Holbrook’s scope in the project in Pahrump had been vastly scaled back but did not offer any suggestion as to why.

The action came about after Holbrook had been featured in a series of news articles in Texas and Ohio, questioning his education credentials and ability to achieve successful results in other communities.

Before that controversy emerged, Holbrook, through a company called The Vercitas Group, was paid to oversee the feasibility study outlining how Pahrump could develop and capitalize on a tourism project.

Holbrook ostensibly left The Vercitas Group, which appears online to have reconstituted itself as MCS Strategies LLC, a similar economic development company run by a man named Michael C. Michalski.

In August of 2012, Michalski said he had a very brief business affiliation with Holbrook.

“We had a loose marketing relationship for a while but that has ended,” Michalski said.

As far as Michalski’s opinion of Holbrook, he said he would prefer not to provide any kind of comment on the matter.

“That’s not something that I feel qualified to comment on,” he said. “Quite frankly, sometimes you get good chemistry on a sports team and sometimes you get real bad chemistry from normally good performers. In our case, it just did not work out and the best thing to do was go our separate ways.”

Town board members are expected to revisit the issue during the final town board meeting on Tuesday.