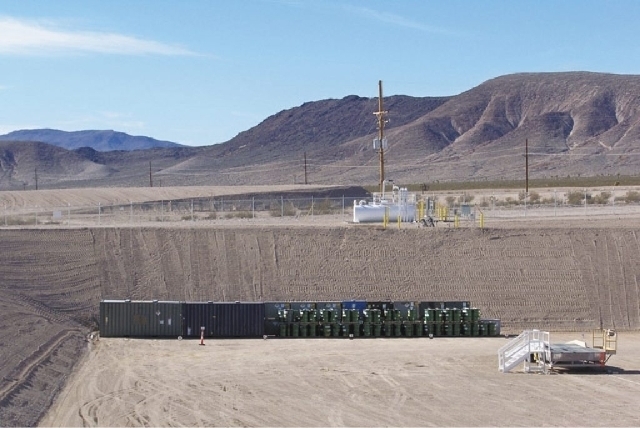 WASHINGTON – After 18 months of delay to address the worries of state officials, the Department of Energy said Monday night it will ship potent uranium waste from a federal laboratory in Tennessee for disposal in Nevada.

Officials did not give a time-line for when the shipments will begin from the Oak Ridge National Laboratory to the Area 5 landfill at the Nevada National Security Site, 57 miles northeast of Pahrump.

Representatives of Energy Secretary Ernest Moniz and Gov. Brian Sandoval have for 18 months discussed DOE plans to dispose of 403 canisters of potent uranium-233 mixed with uranium-235, atom-splitting material containing byproducts that can be used to make a bomb. Experts in nuclear nonproliferation expressed concern that the waste would remain potentially dangerous for hundreds or thousands of years.

The DOE program to ship the radioactive waste as part of environmental cleanup of an aging warehouse at Oak Ridge was put on hold in 2013 after Sandoval objected. Besides environmental and security concerns associated with such hazardous material, Nevada officials raised questions about how exotic forms of radioactive waste were being characterized for disposal.

The Oak Ridge waste was classified as “low level” but would be as much as 1,500 times more radioactive than contaminated debris usually buried at the Area 5 landfill. The heavily shielded waste canisters must be handled by remote-control cranes.

An empty 20-foot cask in a shipping container carried by a modified tractor-trailer departed Oak Ridge on Monday and was expected to arrive at the Nevada site on Wednesday. The dry run will give NNSS contractor National Securities Technology (NSTec) practice in lifting the cask by crane, removing its lid and then removing and placing the waste-filled inner sleeve in the landfill.

The test shipment also allows DOE to go through the exercise of obtaining overweight shipping permits from Nevada and other states along the route. The truck, trailer and cask total about 90,000 pounds.

Attorneys for the state researched the issue but Sandoval has conceded that Nevada lacks authority to block waste burial at the Nevada Nuclear Security Site if the material is properly classified.

At the same time, Moniz expressed reluctance to strong-arm Nevada, saying the state has long supported nuclear programs at what used to be called the Nevada Test Site.

Moniz and Sandoval made progress toward breaking the impasse when they signed a memorandum of understanding last December giving the state a larger consultation role over waste disposal at the site.

Besides insisting that the shipments be handled by the Office of Secure Transportation, the state also obtained a promise that DOE will bury the uranium material in specially configured trenches deeper than the usual 40 feet for radioactive waste.

In the end, Martin said, the state’s experts determined the materials “meet the criteria for disposal at the NNSS.”

DOE officials did not comment when asked how they concluded the time is right to move forward.

Aides to Moniz said in a written statement that in the wake of “productive discussions” with Nevada, “The Department of Energy is moving forward with the shipments of the Consolidated Edison Solidification Program materials from the Oak Ridge site to the Nevada National Security Site.

Known by its acronym CEUSP, the once-liquid waste from a 1960s reprocessing plant in Upstate New York was solidified and baked in steel canisters at the Oak Ridge lab, where it has been stored in a Manhattan Project-era building since the mid-1980s.

DOE officials said the ceramic mixture, in individual canisters 2 feet long and 4 inches wide, was embedded with neutron-absorbing metals and salts to reduce the risk of an accidental nuclear reaction.