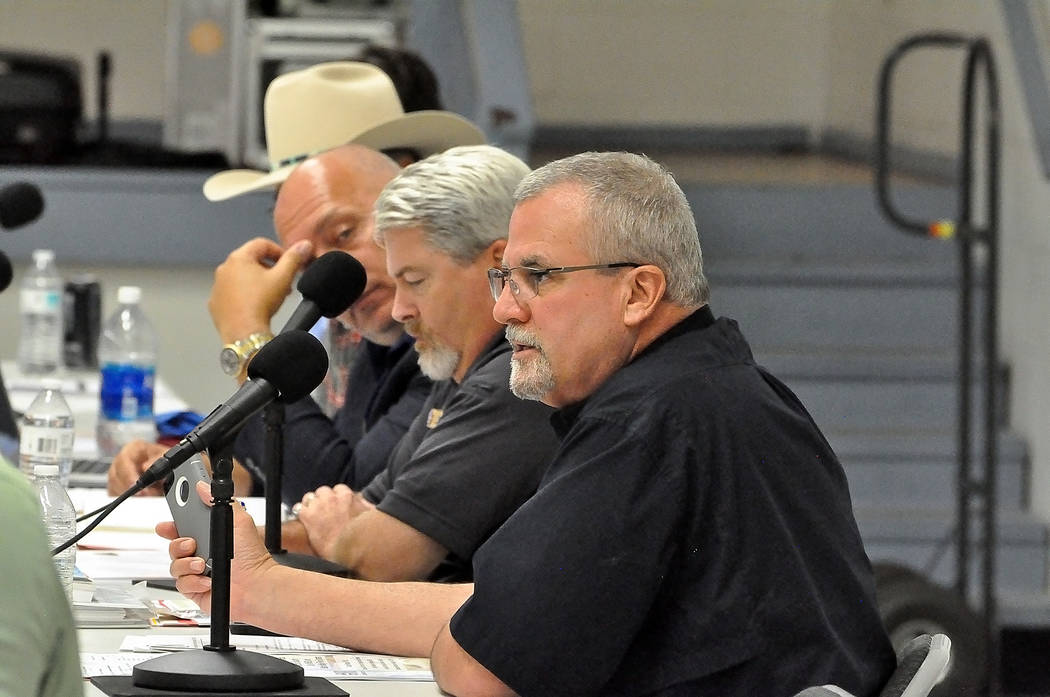 Horace Langford Jr./Pahrump Valley Times - At the Aug. 17 Nevada Site Specific Advisory Board meeting in Pahrump, Vance Payne, director of Nye County Emergency Services announced that RadWatch program training will begin in September in Nye County. It's not yet clear when the program is going to start.

A RadWatch program is coming to Nye County, an official said.

At the Aug. 17 Nevada Site Specific Advisory Board meeting in Pahrump, Vance Payne, director of Nye County Emergency Services, announced that policy training in Nye County would begin in September.

“RadWatch is new to Nevada. Funding has been accomplished through grant opportunities and $2,000 from the Emergency Management budget, with significant support and coordination with the State Emergency Response Commission. The program has cost approximately $26,000,” Payne said.

Jon Bakkedahl, state training officer for the Nevada Department of Public Safety, said the goal of the program is to monitor first responders for radiological exposure while performing their occupational duties.

“Responders are put in positions where they perform life and property-saving missions and may not be aware of a hazard until well after the event reporting is available. … This program allows the responder to immediately review their dosimeter and determine if they were exposed to a level of radiation that may potentially lead to health concerns,” Bakkedahl said.

The RadWatch program was initiated through several state divisions and is currently being overseen by the Department of Public Safety’s Division of Emergency Management. The program is currently implemented in several states, federal agencies and used in the Army.

The RadWatch program was brought to Nevada to replace an outdated system that was not designed for first responders, Bakkedahl said.

“Currently, there are five counties in Nevada and several more municipalities that have either fully implemented the program or are in one of the three steps, procurement, procedures and training. We are working with each county individually to expand the program statewide,” Bakkedahl said.

“The training is about what it is, the policy for use, how they are read, and when they are read. Training will be ongoing for all personnel,” Payne said.

“Having this type of surveillance provides another level of protection for all of our responders that travel and respond to incidents on the transportation corridors that carry low-level nuclear waste to the Nevada National Security Site,” Payne said.

It’s unclear yet when the program is going to start in Nye County.