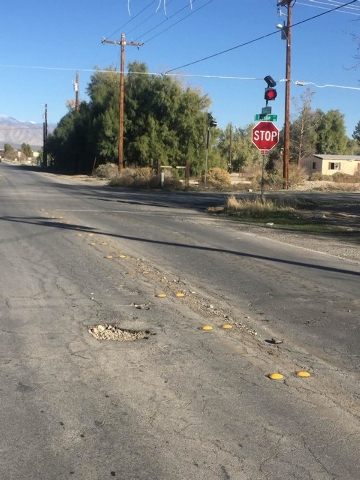 After undergoing two consecutive rainy weather delays it appears that the repavement of the three-mile stretch of Manse Road between Homestead and Hafen Ranch roads is finally set to begin.

The project is scheduled to start this morning after rain washed out any chance of beginning the paving on the two previous scheduled start dates of Feb. 25 and March 2. Although the work will begin Friday, the crew will not work through the weekend, and will start up again next week.

“They’re going to get that busy intersection (of Manse and Homestead roads) out of the way, both lifts and get a couple hundred feet down Manse to the east,” said Tim Carlo, Pahrump Public Works Road Superintendent at the Board of County Commissioners meeting Tuesday. “Then on Monday they’re going to take off… and hit intersections as they go.”

The $1.8 million dollar project will widen Manse road from 12 feet to 19 feet, allowing for bike lanes on both sides. Once the paving is done, stripping and shoulder work will take place and the entire project is scheduled to take 15 days to 20 days to complete.

Rain caused issues on other roadways in the valley as well, as a good sized pothole developed on Basin Avenue, just past Leslie Street.

A timetable for the repairs to the affected areas was not given by Pahrump Public Works, just that the Basin Avenue and David Street intersection repair was on the agenda and that Basin Avenue and Leslie Street issues would be looked at afterward.