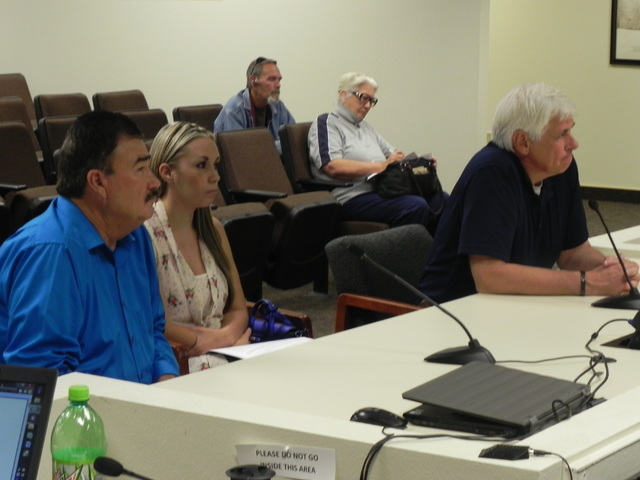 Owners of the White Glove Ranch received a 72-hour special permit to sell liquor at a horse competition this Saturday with plenty of strings attached, following an event described by police as a “riot” in June.

Nye County Commission Chairman Dan Schinhofen made a motion to approve one 72-hour permit. He included a requirement suggested by ranch owners Jose and Gloria Munoz to have four sheriff’s deputies on hand. Schinhofen also imposed a $15,000 bond.

Five people were arrested and two officers were sent to the hospital with minor injuries June 7 after responding to a report of 40 to 60 intoxicated people fighting at the ranch at 5121 W. Betty Ave. Nye County Sheriff Tony DeMeo told the Pahrump Valley Times at that time 200 to 250 people turned on the officers, deputies had to use pepper ball to get the crowd under control.

Nye County District Attorney Brian Kunzi said the Nye County Licensing and Liquor Board, which includes the five county commissioners and the sheriff, could impose conditions on the temporary liquor license.

White Glove Ranch owner Jose Munoz told commissioners the problem began with a fight between two women. He said the ranch had plenty of security, with 16 security guards. But many attendees brought their own beer and drank in the parking lot, Munoz said.

DeMeo told county commissioners there were about 900 people on the inside of the event and a couple hundred more outside. He described what happened when his officers arrived.

“They saw a child injured, they in turn made an arrest on the suspect who injured the child and at that time several individuals decided to interfere with that arrest,” DeMeo said. “A couple deputies fired pepper ball at their feet. Once the deputies arrived peace was able to be maintained. We stayed until the event was over. I sent two deputies to the hospital to be checked out.”

DeMeo said events inside the White Glove Ranch were under control, but there was no policing in the parking lot. He said if a 72-hour permit is issued the license holder should prohibit alcohol from being brought on the property.

Schinhofen said the county incurred an expense from having to send officers to the hospital and from paying sheriff’s deputies overtime, DeMeo estimated it cost about $10,000 overtime. Schinhofen added if the sponsors expect to have more than 1,000 people at an event they may have to get an outdoor festival permit.

“We had better training horses than we had before and people wanted to go see them,” Jose Munoz said.

Munoz said the White Glove Ranch has monthly events. There are usually 250 to 300 people, rarely does it get as large as the June event. He said spectators pay $15 to get in and news usually spreads by word of mouth.

Munoz said the White Glove Ranch is a breeding and training facility where he sells the horses to racetracks in Arizona and California.

Commissioner Donna Cox said it sounds like Munoz is running a business.

When Cox asked Munoz if he had insurance, Commissioner Lorinda Wichman told Cox a $15,000 bond would function like insurance.

The Licensing and Liquor Board also renewed a state winemakers license for the Sanders Family Winery and retail liquor licenses for Tower Pizza at 3561 E. Kellogg Road and El Jefe’s Restaurant at 1560 E. Calvada Blvd.