By Steve Tetreault and Henry Brean Special to the Pahrump Valley Times
October 24, 2014 - 6:03 am 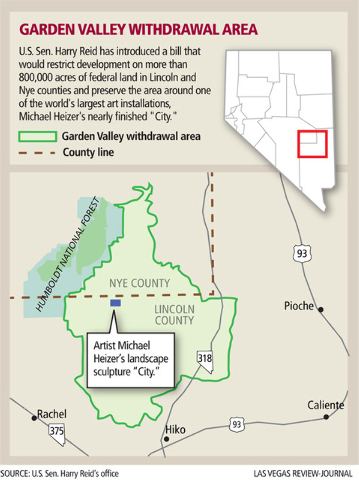 WASHINGTON — A bill quietly introduced in Congress would restrict mining and energy exploration over a sweeping area of rural Nevada including Nye County, preserving scenic valleys and buffering a landmark piece of desert artwork.

The restrictions would not affect current valid land use such as grazing, but it would forbid the Bureau of Land Management from selling any land or granting permits for oil or mineral prospecting.

Activities for new geothermal, solar or wind energy development also would be restricted.

The bill would ensure the most significant feature in the 1,250-square-mile area would be “City,” one of the largest earth sculptures ever created. It is roughly the size of the National Mall in Washington, D.C., and has taken its creator, noted artist Michael Heizer, more than 40 years to craft.

But conservationists said the withdrawal would have a much broader impact, offering a level of protection to some of Nevada’s more stunning landscapes.

“When you think of unspoiled basin and range country, this is a place that best fits that description,” O’Donnell said.

Reid did not respond to a request for comment on the bill. His spokeswoman, Kristen Orthman, said the Nevada Democrat “has long had conversations about how to protect the scenic, natural and cultural values in and around Garden Valley.”

The area once was considered for possible wilderness study but was set aside when Congress debated a Lincoln County land act in 2004.

More recently, its natural and historic values prompted the BLM to reject it as a site for fast-tracking solar projects, O’Donnell said.

Reid toured the area in 2007 and has had subsequent conversations with Heizer, whose monumental art project has used bulldozers, cranes and other heavy equipment to reshape a slice of desert into his vision.

“Now that the project is almost complete, this is something that has been discussed for a while, and it made sense to do it,” Orthman said.

Reid introduced the bill Sept. 16, and was the only listed sponsor. Neither Sen. Dean Heller, R-Nev., nor Rep. Steven Horsford, a House Democrat who represents Nye and Lincoln counties, would comment.

Reid floated a similar proposal in 2010 that would have designated portions of Garden Valley and neighboring Coal Valley as a national conservation area to preserve the area around “City,” said Ed Higbee, chairman of the Lincoln County Commission.

The idea drew opposition from Lincoln County officials then, and likely it will again.

“It is kind of neat stuff,” Higbee said of the “City” complex. But he said it’s hard to swallow restricting development on more than 800,000 acres of a county that is already 98 percent under federal control.

“That’s a huge view-shed,” Higbee said of the proposed withdrawal. “We don’t want that to become a national conservation area.”

The legislation was news to Nye County Commissioner Lorinda Wichman, whose vast district includes all of the county outside of Pahrump.

She said she would want to hear from “the folks that live right around” the affected area before she takes a position.

Heizer, who lives in Lincoln County and whose age is given as 69 or 70, specializes in monumental-scale sculptures and pieces of art built out of earthen materials.

Visible from space, it consists of two massive trenches, each 50-feet deep by 30 feet wide and spanning 1,500 feet.

Heizer’s “Nine Nevada Depressions” are a series of earthen cuts in dry lake beds around the state, including Jean Dry Lake, Massacre Dry Lake near the ghost town of Vya in Washoe County, and a playa in the Black Rock Desert 100 miles north of Reno.

“City” is Heizer’s lifelong project on private land he acquired about 160 miles northwest of Las Vegas, and about 55 miles west of Pioche.

A mile and a half long and 900 feet wide, it comprises five major segments and numerous complexes within each one, made mostly of earth, rocks and concrete and inspired by Native American mound builders and ancient cities of South and Central America.

An art critic once described it as “geometric depressions, mounds and plazas linked by unpaved roads.”

“It is perhaps one of the greatest, most ambitious artworks ever attempted,” said Michael Govan, director of the Los Angeles County Museum of Art who has helped Heizer seek support for the project. Unlike traditional art and sculpture, people will have to wander through “City” — like they would a real city — to take it all in, he said.

The project could cost as much as $25 million, according to “double negative,” a website devoted to Heizer and his creations. “City” is not open to the public, but Govan said it will be when it is done.

He said Heizer is working on final engineering and conservation plans, as the piece is meant to last thousands of years.

Garden Valley has been eyed for several major projects in the years since Heizer started working on his sculpture.

In the 1970s and early 1980s, the government planned to crisscross the valley and others nearby with railroad tracks that would carry MX missiles to and from hidden silos. The program was killed by President Ronald Reagan.

In one of more than 200 technical protests against the Yucca project the state of Nevada argued the “City” artwork was “a cultural resource of national and international significance” and should not be disturbed.