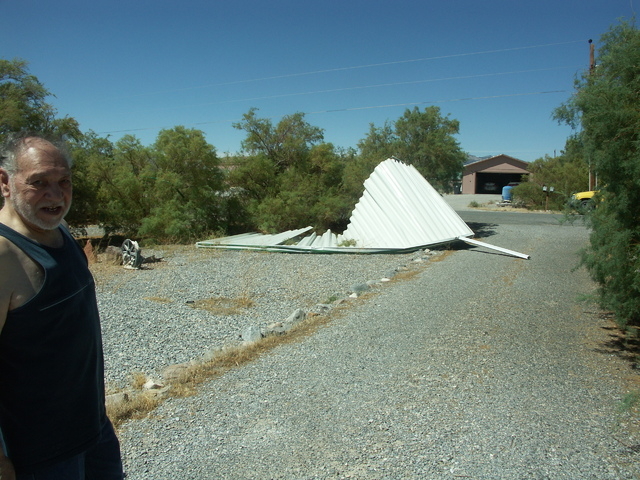 Local resident Vic Barnes was preparing to do his Monday afternoon workout this week when all of a sudden he looked out the window and saw a large dust devil approaching his property at the far west end of town.

Seconds later, he watched an aluminum shade awning in his back yard take flight over the roof of his home and end up resting about 30 yards from his front door.

Barnes said he just stood in disbelief as the large corrugated structure became airborne because the awning was actually bolted into a concrete patio slab.

“I was getting ready to do my sit-ups when I heard some rattling from the backyard. I looked out the window and I saw the wind lift the whole thing up and carried it over the roof. I didn’t know where it went but I heard it hit somewhere near the street. I just said wow, what a mess. We can get very heavy winds out here. I’ve seen them as high as 90 miles per hour come through here. It never really did anything because they came from a different direction. This one, I think came from the west,” he said.

Barnes appeared terribly upset about the awning, even though the roof of his home sustained considerable damage as well.

He said his decision to purchase renter’s insurance made the incident a little more tolerable.

Barnes estimates the damage to his roof, combined with the demolished shade structure may run several thousand dollars following repairs.