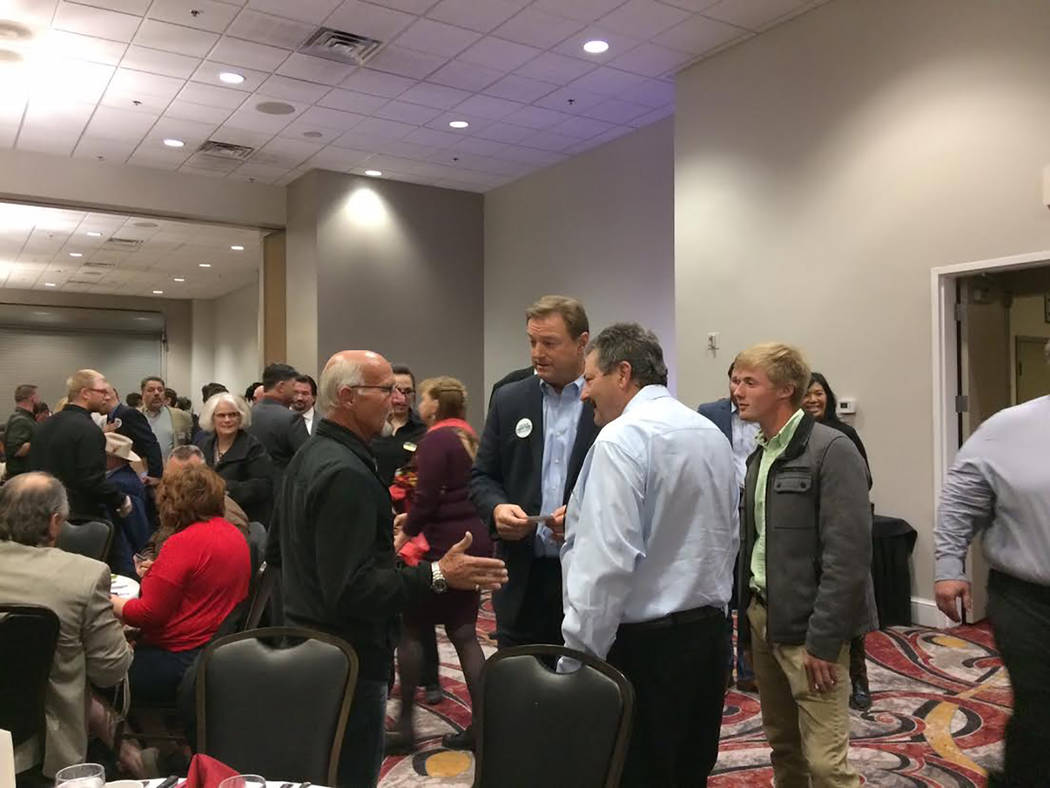 Robin Hebrock/Pahrump Valley Times U.S. Senator Dean Heller spent much of the Lincoln Dinner conversing with attendees. He is pictured speaking with Ski Censke, a professional auctioneer who offered his services for the live auction that was part of the evening's activities. 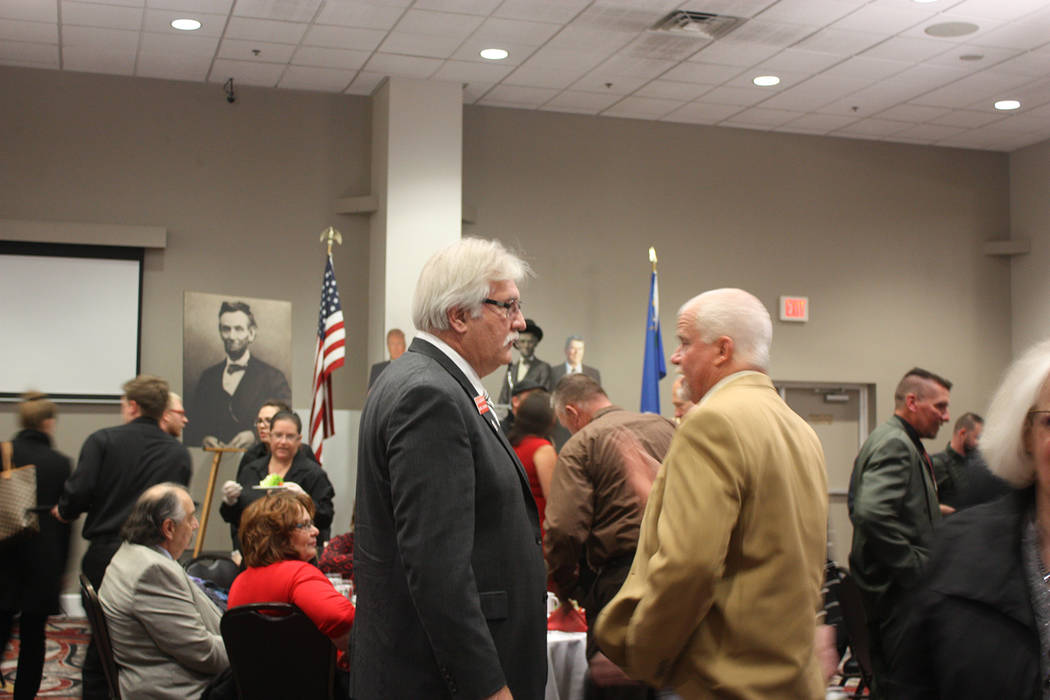 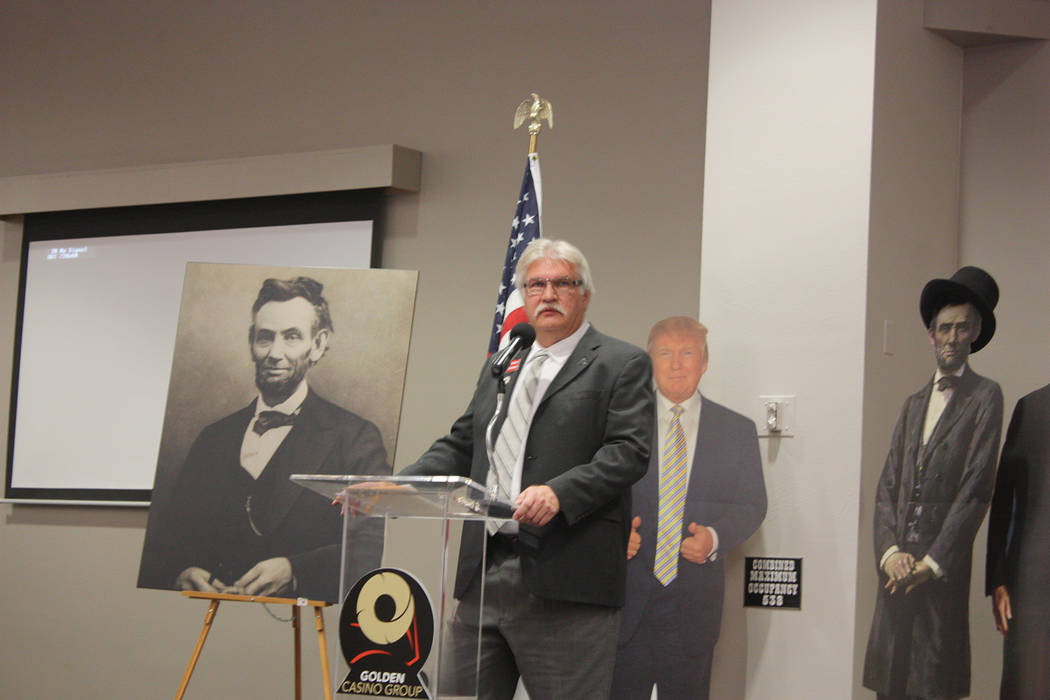 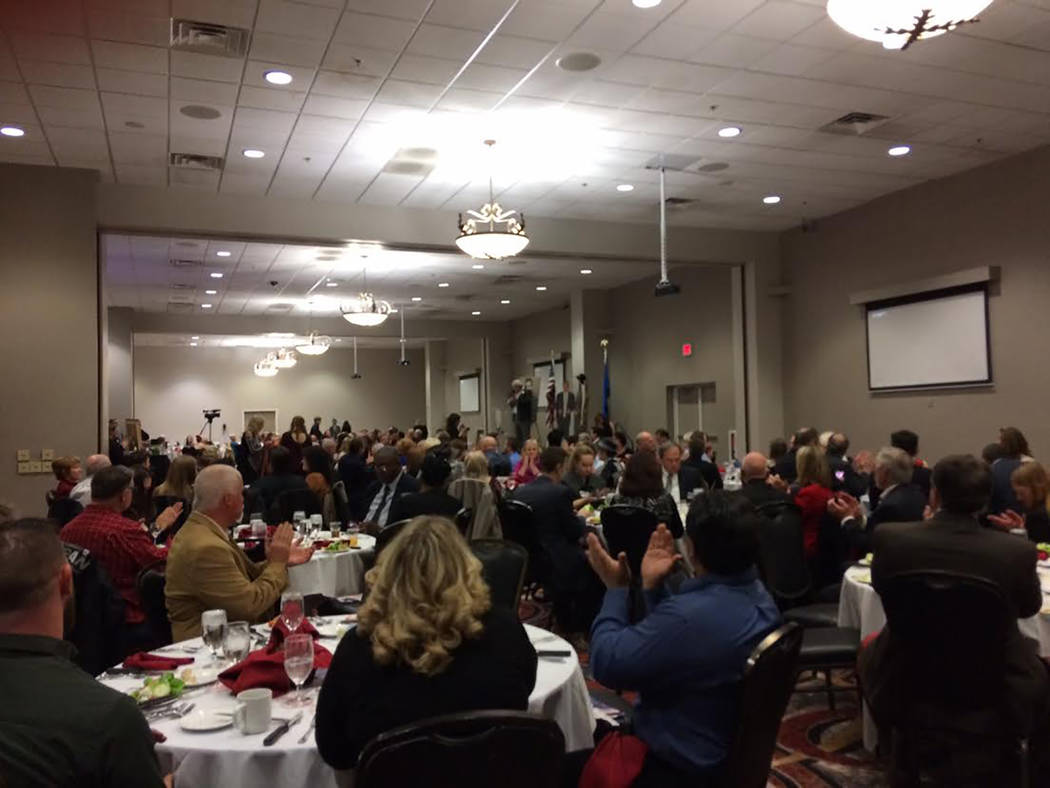 Robin Hebrock/Pahrump Valley Times The audience at the Lincoln Dinner is pictured applauding Joe Burdzinski's opening comments. He welcomed the crowd and primed them for the many political speeches to follow. 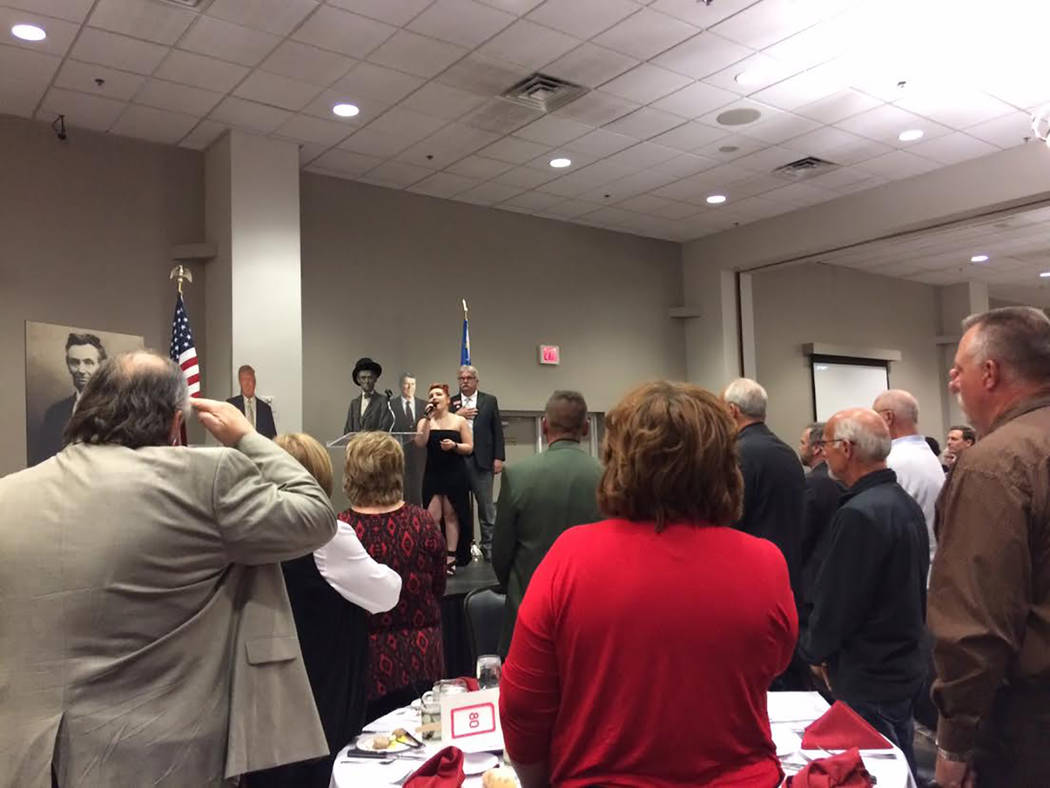 The 2018 Lincoln Day Dinner took place this past Friday at the Pahrump Nugget Events Center, with a packed house of Republicans all coming together to spend an evening in camaraderie just before candidate filing and the primary election season officially kicked off.

The Lincoln Day Dinner is a longstanding annual fundraiser hosted by the Pahrump Valley Republican Women which, in recent years has been joined by the Nye County Republican Central Committee in organizing the event.

The 2018 dinner included a night of speeches, raffles, a live auction and plenty of political socialization.

“I want to welcome you all tonight, for our 39th Annual Lincoln Day Dinner,” Nye County Republican Central Committee Chairman Joe Burdzinski told the crowd as everyone settled in for the evening.

He offered thanks to all those who had donated or taken part in putting the fundraiser together, before the invocation was given and Nevada Republican Party Chairman Michael McDonald led everyone in the Pledge of Allegiance. The national anthem was performed by Hali Williams, after which dinner was served.

There were numerous Republicans in attendance that Friday evening who are planning to seek a seat in the 2018 election. The first hurdle for each of these politicians, of course, will be the Republican primaries, to be held in June. With this in mind, candidates were in full campaign mode as they met with those who will decide their fate in the primary election, attempting to round up support and inspire enthusiasm for their bids for office.

Nevada Senator Dean Heller was one major political candidate in attendance. Heller will be the incumbent candidate in the race for U.S. senator, with two GOP opponents to fend off. Included is Danny Tarkanian, a businessman and former attorney who has run in several other races in the past. Tarkanian was also present at the Lincoln Dinner and, along with Heller, was a guest speaker for the event.

Nevada Attorney General Adam Laxalt, who will be giving up his seat as AG to instead pursue the seat of governor of Nevada, was another well-known Republican face in the crowd. He too served as a guest speaker. Gubernatorial candidate Jared Fisher also attended.

In more localized races, Nevada Assembly District 36 candidate Dennis Hof was present, along with several Pahrump residents hoping to secure a seat as Nye County commissioner in the upcoming election.

Burdzinski and fellow event organizer Andra Braden both reported that the 2018 Lincoln Day Dinner went very well, with a total of 171 tickets sold.

“This year’s dinner had a great turnout of Republican candidates running for statewide and local offices. We had a sell-out; in fact, we had to work with the Nugget at the last minute to provide more seating because we did not want to turn people away,” Burdzinski said. “This event was a great success. It was a hit for the Nye County Republican Party.”

The funding raised, the amount of which was not made public, will be utilized in the many efforts of the Pahrump Valley Republican Women and the Nye County Republican Central Committee.

For more information on the Republican Women visit www.nevadagop.org or email goedhartrenae@gmail.com

For more information on the central committee visit www.nyegop.org, email chairman@nyegop.org or call 775-727-2500.