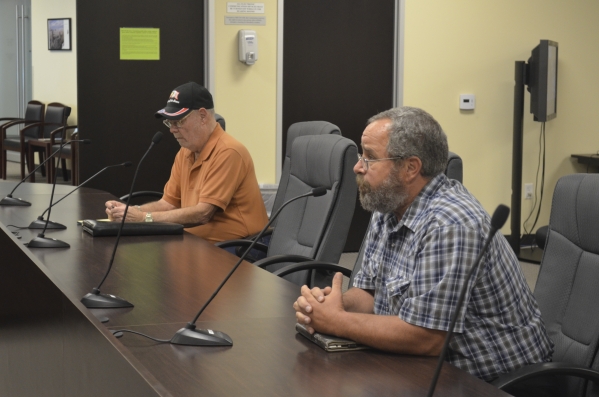 The only Pahrump resident who had filed a petition for leave to intervene into Utilities, Inc.’s request for a rate increase was recently granted intervenor’s rights by the Public Utilities Commission of Nevada.

Robert Howard, a Utilities, Inc. customer, submitted a petition prior to a prehearing conference in Las Vegas on Aug. 6 where Nye County Commissioner Dan Schinhofen made comments in regards to a proposed rate hike.

In a notice of application for authorization filed with the Public Utilities Commission of Nevada on July 8, UICN proposed an increase of approximately 12.34 percent or $390,085 to its water service revenue requirement for a total revenue of $3,551,420.

The proposed hikes include a 13.14 percent increase for all service classes including residential, commercial and irrigation services and public authority. UICN also suggested an increase of 5.7 percent or $161,302 to its sewer division revenue requirement for a total revenue requirement of $2,991,516.

Howard’s petition was followed by the regulatory operations staff’s opposition to his request, but Howard stated in response that his water rates had increased and as a result he had to cut back on grass and use less water for his trees.

In a telephone interview on Tuesday, Howard said he is getting ready to send questions to Utilities, Inc. Howard’s intervention is however limited to issues regarding the residential water service customer class, according to the documents.

“I haven’t sent any questions yet,” Howard said.

Some of the most expensive ones include the Calvada North pipeline that was priced at $408,523; Willow Creek land stabilization at $597,783; and the Willow Creek property purchase at $383,526. Willow Creek Golf Course has been renamed Discovery Park.

A proposed hike was widely criticized by some Pahrump residents and local officials, however the majority of the projects included in the UICN rate case have been deemed prudent in the Integrated Resource Plan process with the PUCN, officials said.

Tom Oakley, director of public relations for Illinois-based parent company Utilities, Inc., said there were no new developments in the case.

“We’re in the ‘discovery phase’ where the PUCN staff delves into our records as part of their examination of the request,” Oakley said. “We won’t hear anything from them for a while.”

After Utilities, Inc., answers Howard’s questions, they will be brought up at the Dec.15 hearing.

The commission may either approve proposed rates, decrease or increase them as necessary to provide that such rates are just and reasonable, according to the records.