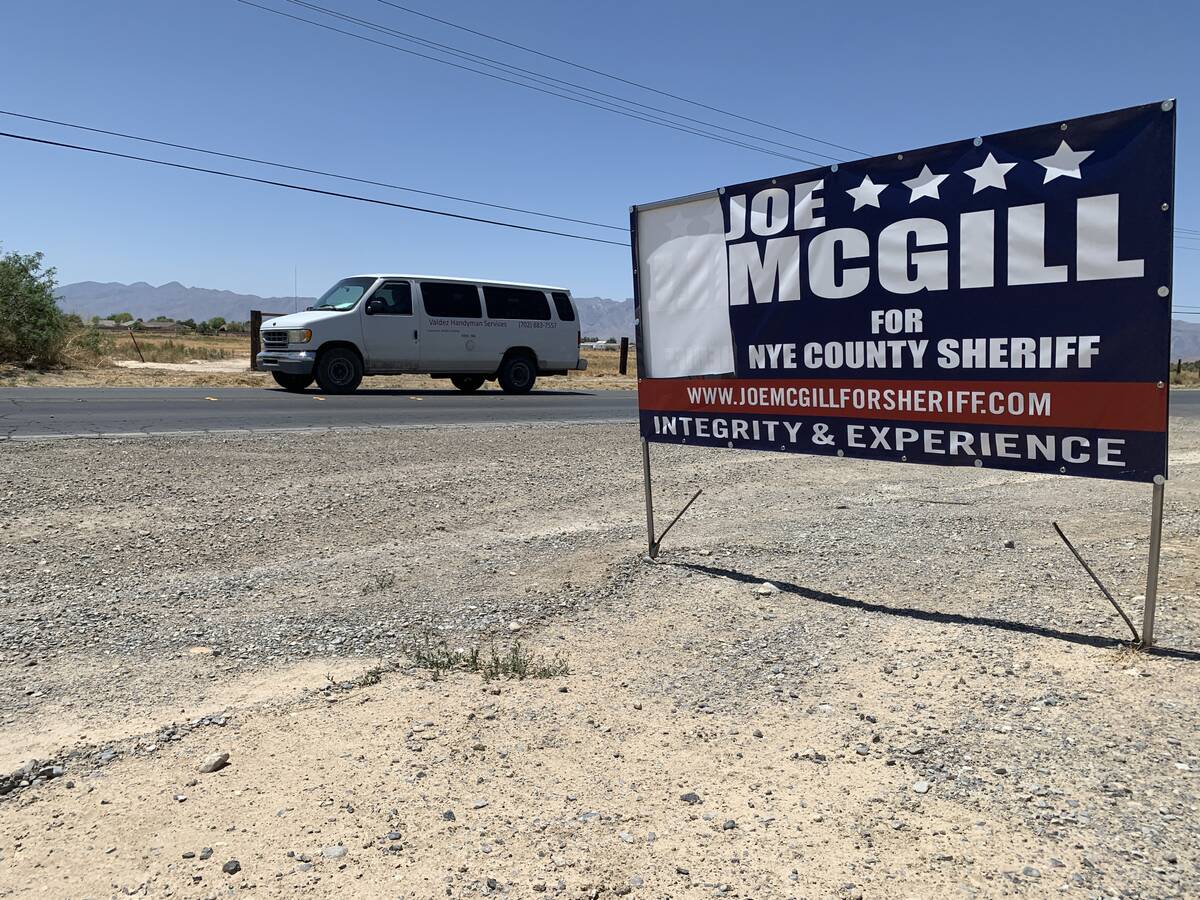 (Brent Schanding/Pahrump Valley Times) (Brent Schanding/Pahrump Valley Times) A $500 reward is being offered for information leading to the conviction of the person or persons responsible for vandalizing Nye County Sheriff’s Office candidate Joe McGill’s political signs. This sign, erected at the corner of Basin Avenue and Blagg Road in Pahrump, had the candidate's photo cut out.

McGill told the Pahrump Valley Times that close to a dozen of his 4×8 billboard signs throughout the community, had his photo cut out of them.

At least one of the signs had the entire banner removed.

All of the incidents occurred along the north end of town, according to McGill.

“We had one at Basin Avenue and Blagg Road and one at Irene and Blagg,” he said. “We also had one at Highway 160 at Simkins and Blagg and Simkins.”

The vandalism began after the primary, he said. The first vandalized sign was discovered Thursday, June 16.

“For the most part, they are cutting my picture out.” McGill said. “On one of the signs, they slashed the far right side and cut the picture out, but who knows what the intent was there.”

Vandalism is a misdemeanor with a penalty of up to six months in jail and $1,000 fine for the first offense.

An investigation is underway to locate the suspect, he said.

“We have no idea at this point about who may have been doing it,” McGill said. “I tend to think that it’s someone who just hates me rather than support of my opponent.”

McGill said that the signs are not cheap to replace.

“They are close to $80 per banner and each of the signs is composed of two banners, so it’s close to $160 per sign,” he said. “The only thing I can do is replace them. At the moment, I don’t have any more, and the person who is making my signs said his printer is broken at the moment. He is hoping to get it back up this week, so hopefully I will have replacement banners coming up this week.”

Further, McGill said that anyone who actually witnesses his signs being vandalized should immediately report the incident.

“If they see somebody in the process of what they believe is damaging the signs, they should absolutely feel free to call 911,” McGill noted. “But if they just discover that one of my signs has been damaged, they can just reach out to me. I will say however, that some of the signs that are damaged are still out there right now because we haven’t taken them down yet.”