Richard Stephens/Special to the Pahrump Valley Times Locals listen to developer Ed Ringle during a community meeting on the future of Beatty. 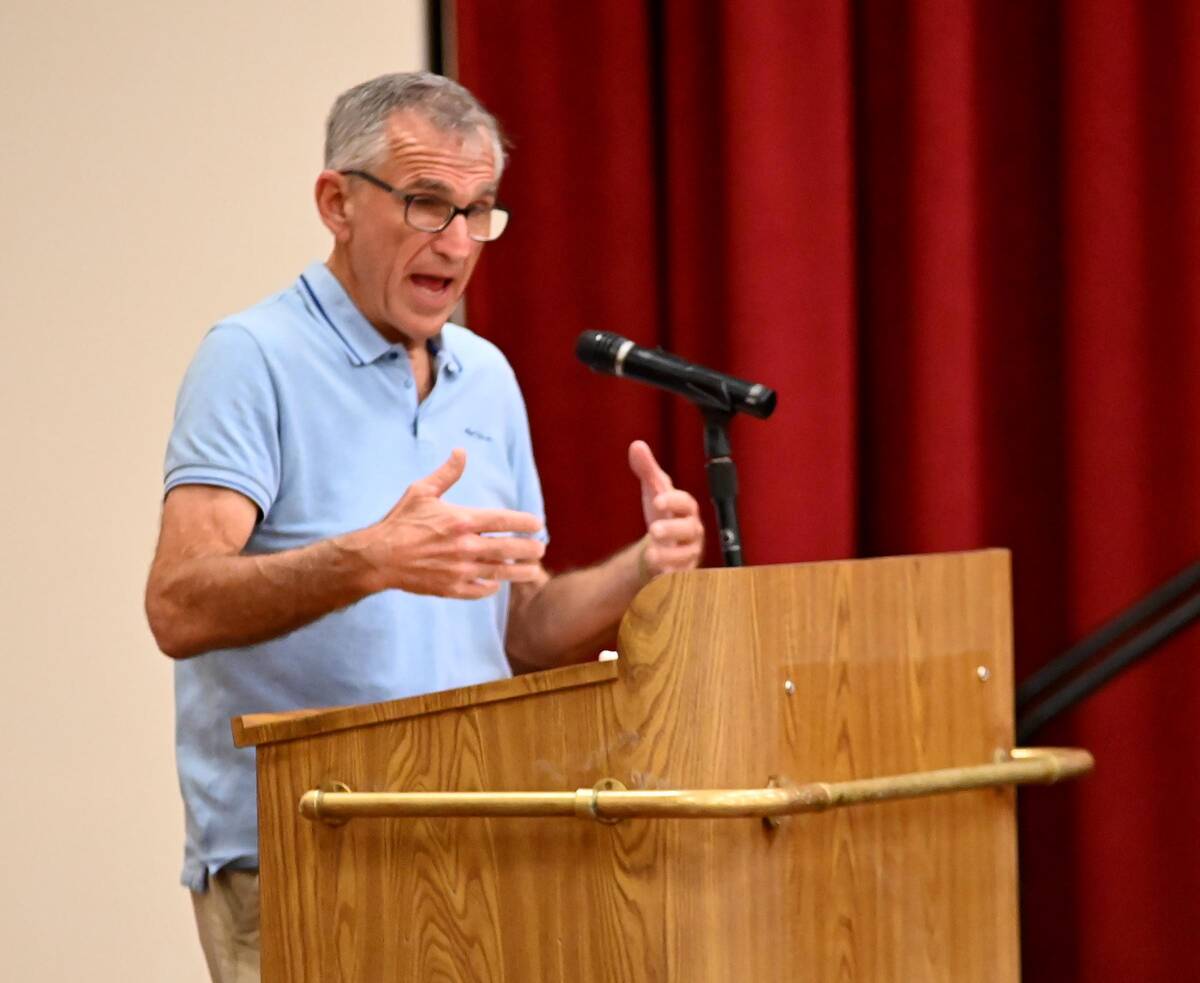 This was the topic of a well-attended community meeting in Beatty hosted by developer Ed Ringle. Dinner was provided by the Stagecoach Hotel and Casino, one of Ringle’s Beatty businesses.

As attendees lined up to enter the big room of the Community Center, they were invited to sign papers lying on a table next to the door. Although each sheet had the heading, “Recall Petition” at the top, and Sheilagh Davis, who was manning the table, said she told them they were recall petitions, some people didn’t hear or realize what they were signing, but merely thought they were signing in as attendees.

Made aware of the problem by Beatty Town Advisory Board Treasurer Erika Gerling, Ringle made an announcement to the crowd to make sure they knew what they had signed.

Ringle is seeking the recall of Beatty Water and Sewer District board members Amina Anderson and Jeannie Ybarra. He says that they lack vision and want to keep the town small.

In his remarks, Ringle said that “the real power in this town is the water board,” and, “a small cabal controls it.”

He said he has been asked why he couldn’t just wait until the next election instead of mounting the recall, to which he said, “we just don’t have the time.”

He also said that the recall would only “engage the democratic process,” bringing an opportunity for people to vote.

“Beatty is at a crossroads,” claimed Ringle. “Does it want to grow with a doctor, a bank, a grocery store, a hardware store, or become a bus stop for Pahrump.”

Ringle said he was aware of people who were critical of him, who thought he wanted to turn Beatty into “Ringleville,” but said if someone else had the vision of what the town could be he’d be happy to “pass the baton.”

Of Beatty the developer said, “I’ve seen opportunity. I continue to see opportunity, and I think the opportunity is greater than ever.”

He is in the process of turning the venerable Exchange Club at the center of Beatty into a steam-punk-themed venue, and envisions extending the theme more into the town and making it a tourist attraction with family entertainment.

He is building a residence and studio for the artist doing the metal artwork on the Exchange Club, and wants to develop an artist community around that location.

He also noted that the Board of County Commissioners just gave their approval of his tentative map to build 40 homes in Beatty.

After Ringle’s remarks, everyone was invited to share their thoughts and visions of the future of Beatty.

Rupert Bragg Smith talked about his properties and said that he agreed with Ringle that Beatty needs to grow, “although he’s about nuts and candy, and I’m about history.” He would like to see the town retain its history as it grows.

David Spicer said that he was one of the few who grew up in Beatty and stayed. “I want everyone who graduates here to have a chance to stay here,” he said. “To stay in it, they have to have a future in it.”

He spoke of the development he has done at his ranch, turning into a venue for events, with many miles of bike trails, and said that the town might also develop a theme park that would attract visitors.

The sense of urgency expressed by Ringle was also evident in Spicer’s remarks, and it had to do with the town’s impending gold mining boom.

“The mines will come, and the mines will go,” said Spicer, but said they could be an “investment tool” for developing the town and diversifying its economy.

Richard Dunsterville said that investing in the town’s schools should be a “main priority.” He said that the elementary school did not have a single working air conditioner and lacked adequate electrical outlets, among other problems.

“I’d be ashamed if I were on the school board,” he said. “Despite that, our school performs better than even a lot of schools in Las Vegas.”

Betsy Reed said that her and her husband’s home and property would go to the NSPCA upon their passing to possibly be used as an animal shelter, and that was her vision for Beatty.

Marty Campbell spoke of the success of Beatty Seniors, Inc., and as for his vision for Beatty, he said, “We want it to grow, but not like California. Not a tourist trap.”

Karl Olson spoke about the town’s off-road trail system and said that there is a need to work with the mining companies to assure that mining activity does not disrupt it.

Olson said that Rhyolite, where he is the caretaker, has had an estimated 1.2 million visitors since the start of the pandemic. He also said he was definitely against solar energy development that would take over a lot of land in the area.

Realtor John DeLee said that, “We need government agencies to make it easy to develop housing,” and that he thinks that “Beatty Water and Sewer has more water than they know they have.”

Ringle said that lack of water was not an issue in Beatty as it is in Las Vegas, saying that Beatty is only using about 20 percent of its capacity.

Dee Crawford said, “My vision is that it grow a little bit, not too much, and have a doctor.” She then invited people to see the renovation that is underway at the Beatty Clinic. She expressed hope that, with the coming of the mines, they’ll be able to have a doctor or physician’s assistant.