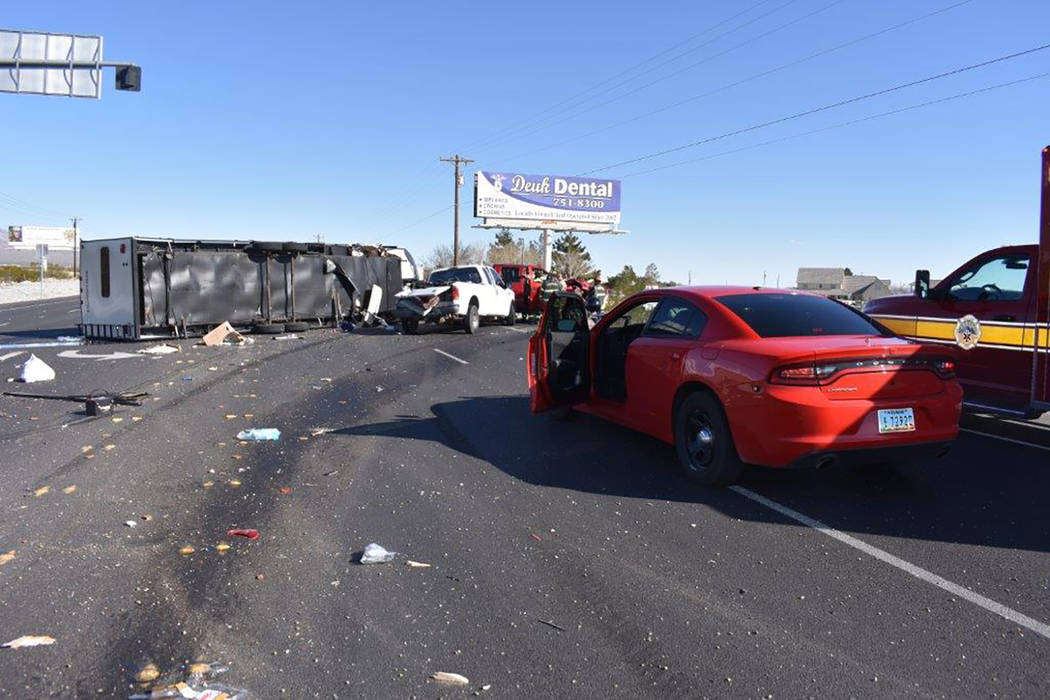 Special to the Pahrump Valley Times Traffic was diverted around a two-vehicle collision along Highway 160 and Homestead Road on Sunday afternoon March 25, just before 4 p.m. Two people transported to Desert View Hospital are expected to recover from their injuries. 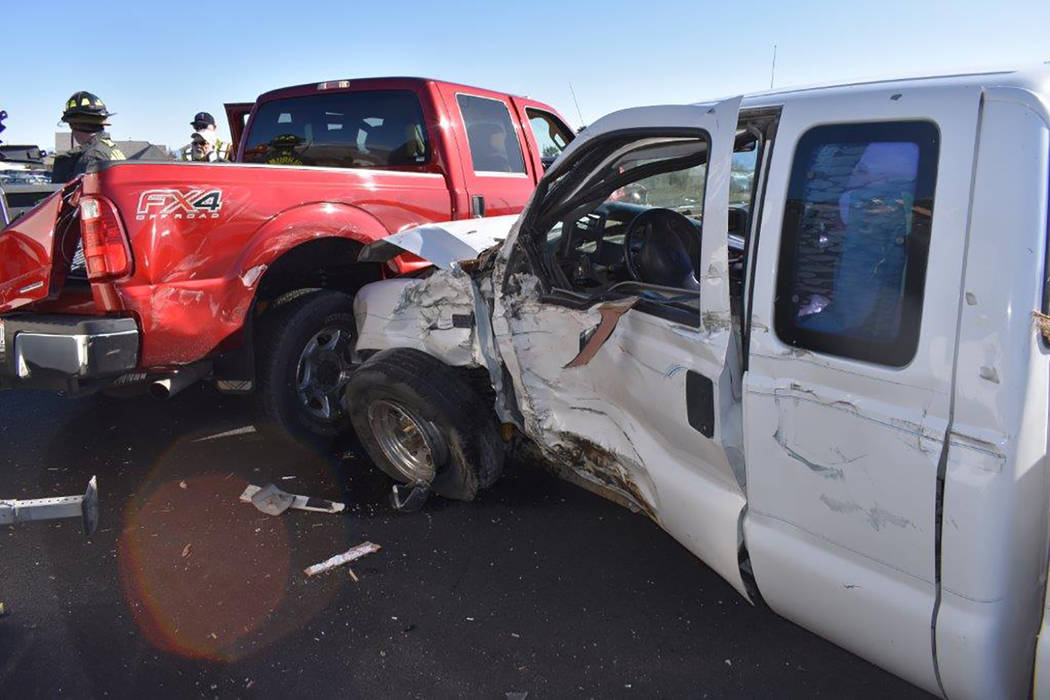 Special to the Pahrump Valley Times One occupant self-extricated from a two-vehicle crash prior to the arrival of first responders at Homestead Road and Highway 160 on Sunday afternoon. Upon arrival, emergency crews found a t-bone type collision with significant damage sustained to both vehicles. A travel trailer involved in the crash overturned and spilled its contents onto the roadway. Crews worked for several hours to clear the scene. 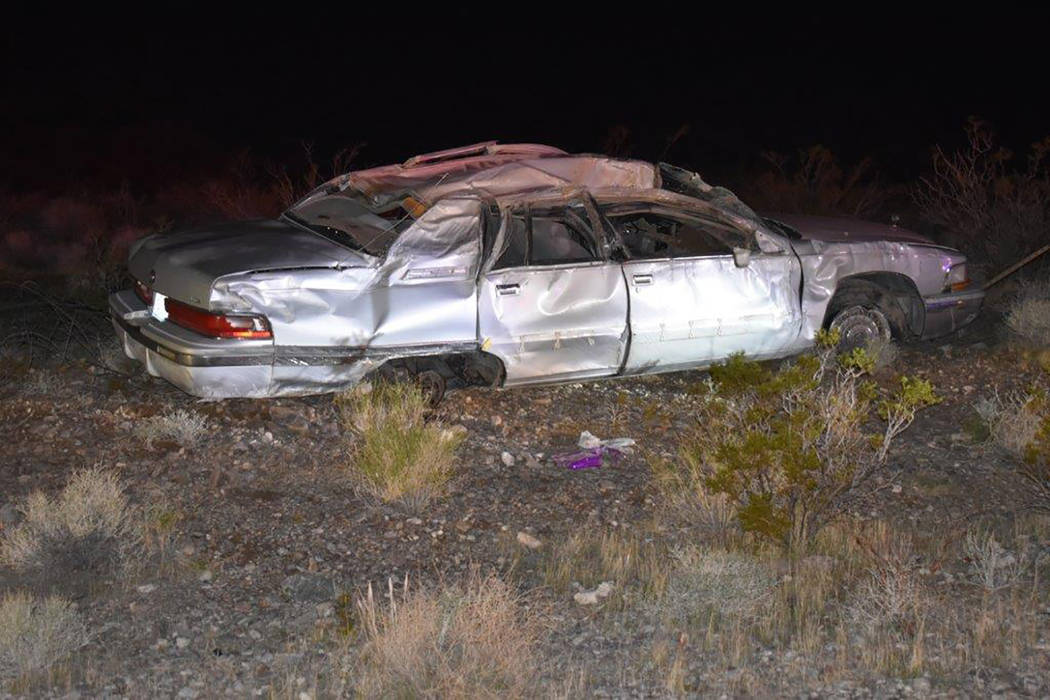 Special to the Pahrump Valley Times Three people transported to Desert View Hospital are recovering from a single-vehicle rollover crash Thursday evening along Highway 160, near Mile Marker 21, on the southend of town. Fire Chief Scott Lewis said all three occupants had self-extricated from the vehicle, prior to the arrival of first responders. 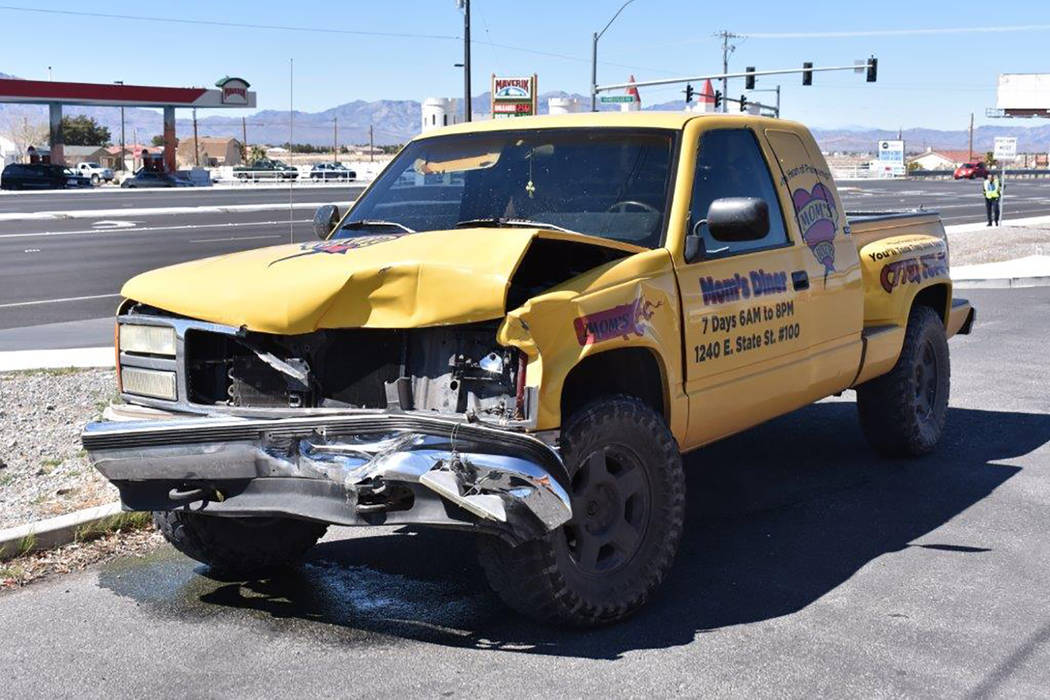 Special to the Pahrump Valley Times One person was transported to Desert View Hospital following a two-vehicle crash at Highway 160 and Winery Road on Friday morning March 23, just before 11:30 a.m. A driver of one vehicle involved in the crash was said to have fled in another vehicle. The Nye County Sheriff's Office has not indicated whether that person was apprehended.

Two people were transported to Desert View Hospital after a two-vehicle crash along Highway 160 at Homestead Road.

Traffic in both directions was detoured around the crash site as crews tended to the injured and worked to clear the scene.

“We were dispatched for an injury motor vehicle accident with an overturned recreational vehicle,” Lewis said. “Crews arrived on location and found a side-swipe type, two-vehicle, T-bone accident with significant damage to both vehicles, one of which being an approximate 30-to-32-foot travel trailer, which overturned on the roadway and spilled its contents.”

One occupant had self-extricated from one vehicle prior to the arrival of first responders.

Earlier last week, at least three people are recovering from a single-vehicle rollover crash along Highway 160, near mile marker 21, on the south end of town.

Lewis said crews were dispatched to the scene on Thursday, March 22, at 7:36 p.m.

“Upon arrival, we found a one-vehicle rollover accident where the vehicle was found upright and resting on its wheels,” Lewis said. “There was significant damage sustained from a rollover-type mechanism. Three persons had self-extricated from the vehicle and all three were transported to the local hospital.”

An early morning kitchen fire prompted the response of Pahrump fire crews to the 1900 block of south Highland Avenue on Friday at 1:30 a.m.

“Crews arrived to find a kitchen fire, where the damage was contained to that of the kitchen area,” Lewis said. “It appears the cause of the fire was related to cooking, therefore it was accidental in nature. There were no injuries.”

Also on on Friday, emergency crews were dispatched for a report of an injury motor vehicle accident at Winery Road and Highway 160, just before 11:30 a.m.

“Upon arrival, crews found a two-vehicle, T-bone collision with significant damage to both vehicles,” Lewis said. “Apparently, one driver jumped out of the vehicle and fled the scene in another vehicle. We transported one patient to the local hospital.”

Several hours later, emergency crews responded, along with California first responders, to an off-road motorcycle crash off of Highway 127, near Highway 190.

“We were dispatched for an injury motor vehicle accident and mutual-aid assignment in southern Inyo County, California,” Lewis said. “Crews worked with Amargosa fire crews and Southern Inyo EMS to locate and provide care to a female motorcyclist who had sustained severe lower extremity injuries as a result of that motorcycle accident.”

“Flight was brought to the scene where patient care was transferred and that patient was flown to UMC Trauma in Las Vegas.”