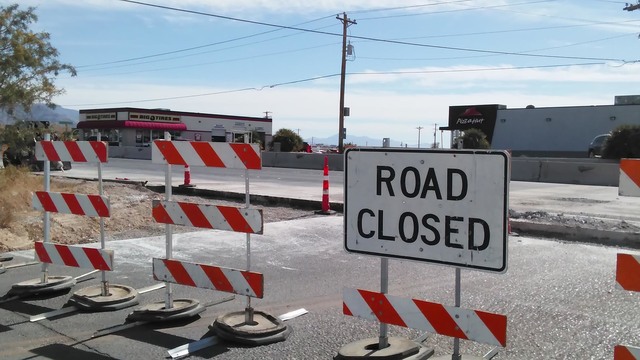 Emergency response times may be delayed as area road projects progress for the next six months, as this section of East Street at Highway 372 is now closed to traffic. Fire Chief Scott Lewis said his department conducted internal training on how crews will use alternate routes when responding to emergency calls for service. Selwyn Harris / Pahrump Valley Times

For the next six months, Pahrump first responders will be forced to deviate from the normal routes as they respond to emergency situations around the community, due to road construction zones.

Pahrump Valley Fire and Rescue Chief Scott Lewis said his department has conducted internal training on how crews will respond to incidents such as vehicle collisions, medical service calls and fires.

As a result, the fire department has created alternate travel routes as work continues on road-widening projects and roundabout installations on Highways 160 and 372 respectively.

“At this point, we still can navigate down Highway 372 even though it’s one lane in each direction,” he said. “Quite frankly, it’s a little bit hit or miss depending on what time of day it is and whether there is significant traffic that is also in the detour routes that we have identified. Response times will obviously be affected as a result to of the ongoing construction.”

As a result, Lewis said some area residents can expect to see emergency vehicles in their neighborhoods a bit more often than usual, because of those alternate routes.

“We are going to have to utilize just about every route available to us,” he said. “Even Highway 160 heading south, is still a problem area for us due to the construction. We are also running into areas where during our responses, drivers don’t have the ability even to pull off on the side of the road to yield to emergency vehicles, so we have had challenges with that.”

On the issue of the department’s larger apparatus such as engines and the tower ladder, Lewis said negotiating a roundabout could present a challenge when responding to service calls.

“We believe that some of our larger apparatus can negotiate the roundabout based on the evidence that we have been presented,” he said. “It’s a sloped surface which gives us the ability to kind of ride up over those to a certain degree. We are identifying based on what the final product looks like, how we are going to navigate the roundabouts.”

Construction of the roundabouts required the removal of a fire hydrant at one location, adjacent to a business.

“We have identified others in the area that we could utilize,” he said. “We have also identified those target businesses that could also be impacted by a fire suppression or medical event.”

One of the several businesses at the heart of the roundabout construction at Pahrump Valley Boulevard and Highway 372, is Big O Tires.

At present, owner Drew Witten said he’s waiting to see how the six-month construction period will affect his bottom line, as direct access to the business is now limited.

Witten has been at the location for 24 years.

“As far as my business being affected, it’s kind of hard to say right now,” he said. “I imagine it will eventually affect it but it hasn’t at this point. The construction has made it much harder to get here directly. Only time will tell how much this will affect it.”

Additionally, Witten said he’s seen quite a few vehicle collisions at that intersection over the past two decades.

He lamented there may be even more once construction is completed.

“I think once it’s completed there might be more accidents than before,” he said. “They say with a roundabout, there’s less fatalities and serious accidents because you’re really not going as fast. I think however, there will be more fender benders, side-swipes and stuff like that.”

“We are preparing for the month of October and reminding everyone to use due care in areas where there is poor illumination,” he said. “The burros are also out in force on the north end of the valley along the highway. It’s a very poorly illuminated area so drivers should take their time and slow down. It’s important not to overdrive your headlights and use your high beams. Drivers should just expect the unexpected.”