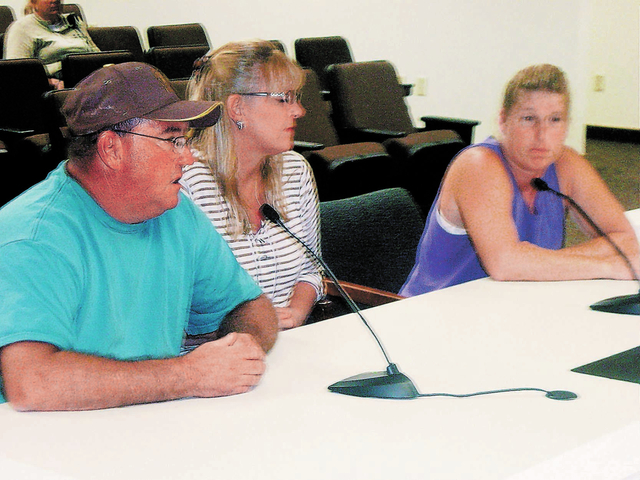 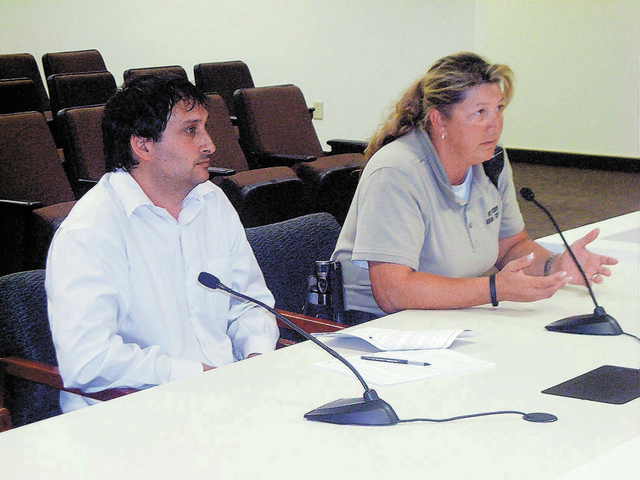 Andrew Sawyer said he didn’t think there would be anywhere to keep exotic animals anymore in Pahrump, after his request for a conditional use permit to live with two chimpanzees on 10 acres at 1700 S. Equestrian Court South was denied by a 5-1 vote of the Pahrump Regional Planning Commission Wednesday.

Sawyer admitted to the Pahrump Valley Times afterwards that chimpanzees are getting a bad rap lately, after the recent escape of two chimps in Las Vegas and the recent scandal over James “Mike” Casey, who tried to open his Great Ape Experience in Pahrump with his chimps and was later arrested in Florida.

“The chimps right now are getting a lot of bad publicity. They’re taking it out on good owners,” Sawyer said. “We’re as far away from neighbors as you can be.”

But a handful of neighbors who testified against Sawyer didn’t think so. RPC Chairman John Koenig noted the staff report, which said 30 existing residential buildings were within a 2,000-foot radius. Nonetheless, planning staff recommended approval, as Sawyer wanted to build an exterior fence around an interior fence, with a covering on the top, even a tunnel connecting the steel barn to an exterior enclosure.

The property is on the far west side of Pahrump in a rural homestead zone that requires a minimum of 4.5 acre lots where some neighbors have horses and farm animals.

Nye County Animal Advisory Committee Chairman Scott Shoemaker, who together with Zuzana Kukol owns a number of exotic animals on the far northwest side of Pahrump, said the complaining neighbors live within three miles of African lions, tigers and cougars. He said a horse ranch is within a quarter mile of their property and there have been no complaints. Shoemaker said the escaped chimps in Las Vegas didn’t belong to Casey or Sawyer and there’s no record of them harming people.

Sawyer planned to move in with an 8-year-old chimp and acquire another chimp within a year, for company. He described the chimpanzees as lovable creatures much like humans who show unconditional love, though neighbors described watching videos about chimpanzees attacking humans, making loud noises and exhibiting aggressive behavior.

Sawyer got a boost of confidence, after his sole ally on the board, RPC member Bob King, made a motion to approve, after adding a few conditions suggested by RPC member Greg Hafen II, namely that the permit be only for three years instead of five, and that any escapes would invalidate the permit. Also, Sawyer would have to erect a block wall and landscaping and limit himself to just two chimpanzees.

“We initially started with five years because this is an area on the western edge of town that at this time does not see a lot of development,” Planner Beth Lee said of the permit time frame. She said if the RPC approved, Sawyer’s facilities would have to be approved by Nye County Animal Control.

Commissioner Frank Carbone felt a shorter time period would allow an examination of the conditional use permit.

RPC members struggled to approve the project, especially after county attorney Tim Sutton said they’d have to reach a conclusion it would meet all eight conditions of approval for a conditional use permit. Planners said the project wouldn’t meet a condition that granting the permit would be a substantial improvement to property in the vicinity. The planning department said the risk of an escape would mean the use could be hazardous or disturbing to future neighboring uses, another condition for approval, but added steps Sawyer was taking to enclose the structures and working with animal control could reduce that opportunity.

Her husband, Lawrence Small agreed. “I am an animal lover and I have two horses, chickens and all my grandchildren. With all the bad press chimpanzees get, I’d like to voice my concern.”

William Sutton, who said he represented his parents who live next door, said he read on the Internet chimpanzees can be heard screaming for two miles. Sutton said he read the chimps can attack a person and tear them up.

“He stated that they had to move three or four times already and I’m curious why if it’s such an expensive endeavor, why has he had to move?” Groene asked. “It raises a red flag he had to move so many times. We have a lot of livestock. I’m really concerned if they get loose. They had a report about chimpanzees that got loose in Las Vegas that attacked people.”

“I have a lot of grandkids come out to visit me and I don’t want no chimpanzee running after my grandkids,” Iwinski said.

Sawyer replied he lived in Arizona where he initially enjoyed grandfather status for his chimps, but when that didn’t work out he moved to Las Vegas, where he again had to move because he lived on a two-acre parcel in a residential area.

“They did not attack any people. Any of those stories you heard are false. These chimps, they’ve never attacked anyone, they never got loose,” Sawyer said. “There’s never been a situation where chimps attack their owner. I don’t know where people read this on the Internet.”

He added of his plan, “It’s pretty much escape-free, except for human error, which can happen in any situation.”

King determined Sawyer was making a substantial improvement to property in the vicinity, a condition required for approval, by constructing the enclosures, block wall and landscaping. But Koenig said Sawyer’s permit could create additional requirements at public cost if an animal escaped and could be detrimental to property owners because of the noise from the chimpanzees, two other conditions needed for approval. Sutton said the key word in the one condition was it had to potential to create “excessive” additional requirements at public cost.

King thought the possible cost to public services wouldn’t be any greater than ordinary animal owners who don’t need conditional use permits.

“It would be the same if I had 10 dogs in my back yard, the gate got open and 10 dogs got out. Animal control would likely have to be called to help round up the critters,” he said.

Sawyer said the chimps sleep from sundown to sunup. He said a dog lives next to his rented property and barks constantly.

Nye County Animal Control Officer Susan Ryhal said there would be no open area. When animals need to be transported they can’t come out of a fully enclosed area to be put in a vehicle.

“It doesn’t eliminate but it reduces the risk of escape. We were confident that would be secure,” Ryhal said.