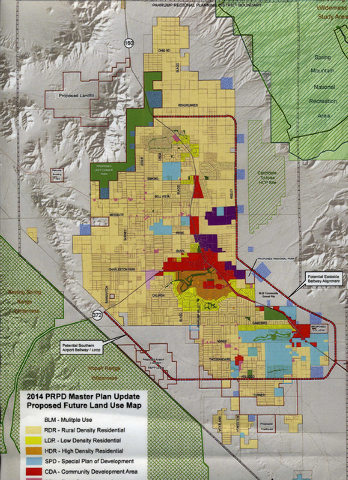 Local residents are voicing problems with the master plan despite the Pahrump Master Plan steering committee’s years-long efforts to finalize revisions to the last plan, which was adopted in 2003.

The Pahrump Regional Planning Commission was the venue for the latest complaints, but nevertheless voted to recommend approval of the plan.

The Nye County Commission has yet to schedule it for a public hearing. The update is supposed to provide clarity and increased flexibility between master plan designations and zoning districts. Oftentimes people requesting zoning changes before the RPC also have to request a master plan amendment. The introduction of the revised plan states it will promote a more efficient pattern of community development, preservation of rural areas and recognition of water resource issues.

Tri-Core Engineering received $1.4 million to draw up the first Pahrump master plan, approved in November 2003. Zoning was supposed to follow soon afterwards, but the zoning map, prepared by Hogle Ireland consultants, which was awarded $715,188 in contracts, wasn’t adopted by commissioners until June 2007. Master plans are usually updated every five years.

The master plan map includes land for the proposed Last Chance Park. An east side beltway and a southern airport beltway loop around Pahrump are also shown. The proposed Great Basin College site is listed to the southeast as well as a proposed park and ride on South Highway 160 near the Clark County line. A candidate tortoise habitat conservation plan site is proposed for a large chunk of northeast Pahrump Valley, east of Higley Road. The proposed future landfill site, north of the Last Chance Range, is also outlined.

“The idea behind this plan is to make it more like what’s out there. This document does not change anybody’s zoning or what they can do on the property; however, it does show intent,” said former Planning Director Bobby Lewis. But there were still worries.

County Commissioner Frank Carbone said some people are concerned down the road their property may be down zoned from general commercial to residential, as reflected in the master plan. At an RPC meeting last month, some residents in the vicinity of Pahrump Valley and Thousandaire boulevards complained the revised master plan designated 22 parcels rural density residential, where some commercial development has taken place.

When the master plan revision got to the RPC for their review April 24, Tony Celeste, an attorney for Focus Property Group, wanted to preserve higher density development at the former Pahrump Dairy property and at the south end on Homestead Road and Bond Street. The dairy property was proposed for rural density residential in the new master plan.

Pahrump Town Board Vice-Chairman Bill Dolan countered, “We need to have more designation that allows agriculture on the bigger pieces of lots, the dairy farm area, out south of town.”

He referred to Champ Roach, who has a large greenhouse but was zoned village-residential, which prohibits agriculture.

“There’s nothing that says because we changed the master plan that someone who owns property in that area has to come in and ask for a zoning change,” RPC Chairman John Koenig said. “The master plan is a vision, where we’re going, where is this area going to be 10 years from now.”

“I want to make sure it gets on the record because there are people who think their zoning will change with this master plan update,” Carbone said.

There were other spots ironed out at the last minute. Property across from Lakeside Casino was listed as rural density residential, a designation that Hafen said would prohibit the owners from expanding without coming before the RPC. A similar designation for a property owner storing numerous old vehicles at Highway 160 and Mesquite Avenue would put that into non-conforming status.

A lot of the late discussion revolved around North Highway 160. Planner Cheryl Beeman said a lot of the highway frontage from Simkins Road down to Mesquite Avenue was reclassified rural density residential based on residential subdivisions created during the Calvada project.

“Everyone thinks this will be developed commercial along the highway. We don’t know that,” Beeman said. She felt rural density residential was a proper designation until it’s developed, though some committee members thought a Community Development Area designation would allow a variety of commercial or residential properties.

Bill Clark, 200 E. Mesquite Ave., complained, “95 percent of the owners in this valley don’t live here and nobody knows what’s going on.” He said properties like the Dollar General Store were in residential zones.

Burt Christie, owner of Eagle Motors at Blagg Road and Mesquite Avenue, said when a master plan is set, zoning usually follows. He hopes to expand when the economy improves, onto an adjacent lot now master planned residential.

Ronny Murphy, whose family owns a construction company, pleaded for more time to examine the revised master plan. For starters, he wanted his 80-acre gravel pit on the far west end of Betty Street changed from low density residential.

“My father owns 400 acres in Pahrump. I am requesting that you please don’t make a determination on this. I would like to look and see how many of our properties are going to fall in the same situation. When you guys say master plan doesn’t change zoning, that’s not true. With our personal experience we fought Hogle Ireland the whole time from the beginning. We had properties that are grandfathered that should have been heavy industrial,” Murphy said.

An impatient Koenig told him, “This has been going on for four years, this change to the master plan, four years, one meeting every month and in general we’ve had maybe one person from the public attend the meeting. When they were done Cheryl had a bunch of meetings with the public, they were attended in general by two or three people.”