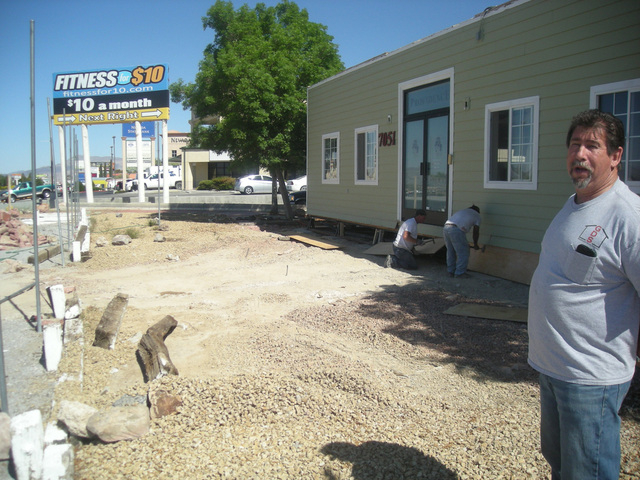 Gerald Schulte, owner of GDS Enterprises, will be required to pave and landscape the new location for his Dream Homes mobile home sales business at 1361 S. Highway 160 and remove a billboard, as part of Pahrump Regional Planning Commission approval Wednesday for a conditional use permit.

Schulte moved down the street to make way for the new Holiday Inn Express Hotel near the Gold Town Casino, where he relocated his mobile home sales business in April 2011. According to the planning report his business license had expired in June 2012 and wasn’t renewed.

Schulte will be given a year to do the paving and landscaping, the RPC also asked for a billboard to be taken down immediately after complaints from Tim Hafen, who owns the neighboring property.

Schulte asked to reinstate a previously non-conforming use that normally expires after a business is unoccupied for more than six months. County planners had recommended approval of the permit without the conditions.

The property is zoned general commercial which allows manufactured home retail sales and an outdoor sales display lot. Planners said it wouldn’t change the essential character of the area or have a negative impact on surrounding properties.

Hafen disagreed with that last point.

“How can you have a business coming right off the highway with no paving?” Hafen asked. He noted the Saddle West Casino across the street and the Nevada State Bank building had nice paving and landscaping. “Put in some landscape, put in some paving for crying out loud.”

Hafen said he didn’t think the billboard, which currently advertises the Fitness for $10 gym, met setback requirements and said it blocked the location of his Hafen Professional Center, between Dream Homes and the Nevada State Bank.

“The commission ought to give some thought to that being removed or altered. It’s not a very professional sign,” he said.

Nye County Planning Director Bobby Lewis said the sign is grandfathered into existing regulations, but the RPC was in its authority to order it removed, as an off-premises sign destined to be sunsetted.

“We have to be cognizant of where that business is going to go and what it’s going to look like. It’s on Highway 160, it’s not on some back road nobody’s going to see,” Koenig said.

Afterwards, he told the Pahrump Valley Times, Schulte had agreed to do the paving in the planning director’s report. Lewis said Schulte would have to provide handicapped access, he’d also be amenable to minimal landscaping.

“I have to agree with Mr. Hafen that we should spruce up as much as we can, the businesses that front the main highway that runs through our town,” RPC member Bob King said.

RPC member Bill Dolan said the Pahrump community assessment recommended sprucing up Highway 160 and Highway 372 frontages. He also wanted paved parking in the back for employees and the public.

Schulte didn’t make the meeting but he said Thursday he needed time for the improvements.

“It’s going to cost me a hundred grand to make this move and to pay another $25,000 for asphalt, I gotta sell a few homes and the economy’s not that great,” he said.

Schulte said when he finished setting up his new business the area will look a lot better. But he said the billboard didn’t belong to him and has been there before the Hafen Professional Center, adding it originally advertised PJ’s Market and later the fitness center.

“I’m not the owner. I got no control over that. I’ve love to put my sign up there,” Schulte said.

He pointed to other businesses in the other direction fronting on Highway 160 without paving and landscaping, like the remains of Valley Homes across the street, a mobile home business that closed after the arrest of owner David Cleveland.