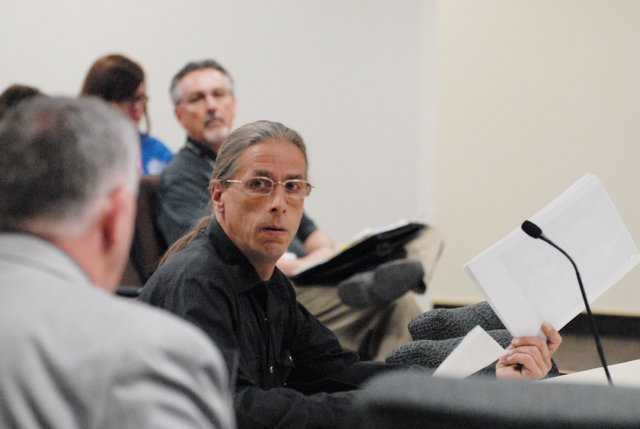 Nye County commissioners Tuesday overturned a recommendation by the Pahrump Regional Planning Commission and approved a conditional use permit for a commercial kennel requested by Douglas Varin, owner of the Howl-a-Day Inn and Spa at 1440 W. Black St., in the rural estates zoning district.

Varin said he wants to operate a show breeding kennel for his 27 dogs ranging from 2 to 16 years old, representing generations of championship stock, of which 15 live in his house. The dogs will be housed indoors from 8 p.m. to 6 a.m.

He said the property is ready for a final inspection and kennel permit, adding that to date Nye County Animal Control hasn’t received any complaints over noise or odors.

Proponents and opponents both delivered petitions. Varin said he had a petition of support signed by 30 people. Douglas Kaufman, 1510 W. Betty St., said he had 15 signatures from neighboring homeowners totally opposed to the kennel.

“We feel it does not belong in our neighborhood,” Kaufman said.

But Nye County Animal Advisory Board member Steve Benson said he’s had dealings with Varin since he came to Pahrump and the facility meets the standards for animals.

Varin told Commissioner Donna Cox he looked for commercial property but couldn’t find anything to meet his needs. Cox said to deny a permit because the dogs might bark isn’t responsible planning.

Commissioner Frank Carbone wanted to remand the permit back to the RPC. District Attorney Brian Kunzi said the commission either had to uphold the RPC decision or overturn it, he said there wasn’t any new evidence that couldn’t have been presented to the RPC.

“We’re in a position if we deny, the only place he has to go is court,” Carbone said. “That’s going to be very expensive. These people are not the richest people in town.”

Carbone made the motion to reverse the RPC. That came after Commissioner Butch Borasky questioned the RPC denial based on a finding on one of the standard conditions of approval by Regional Planning Commissioner Jennifer McCall, that the conditional use may involve uses, activities, processes, materials and equipment and conditions of operation that could be detrimental to any persons, property or the general welfare by reason of excessive production of traffic, noise, smoke, fumes, glares or odors.”