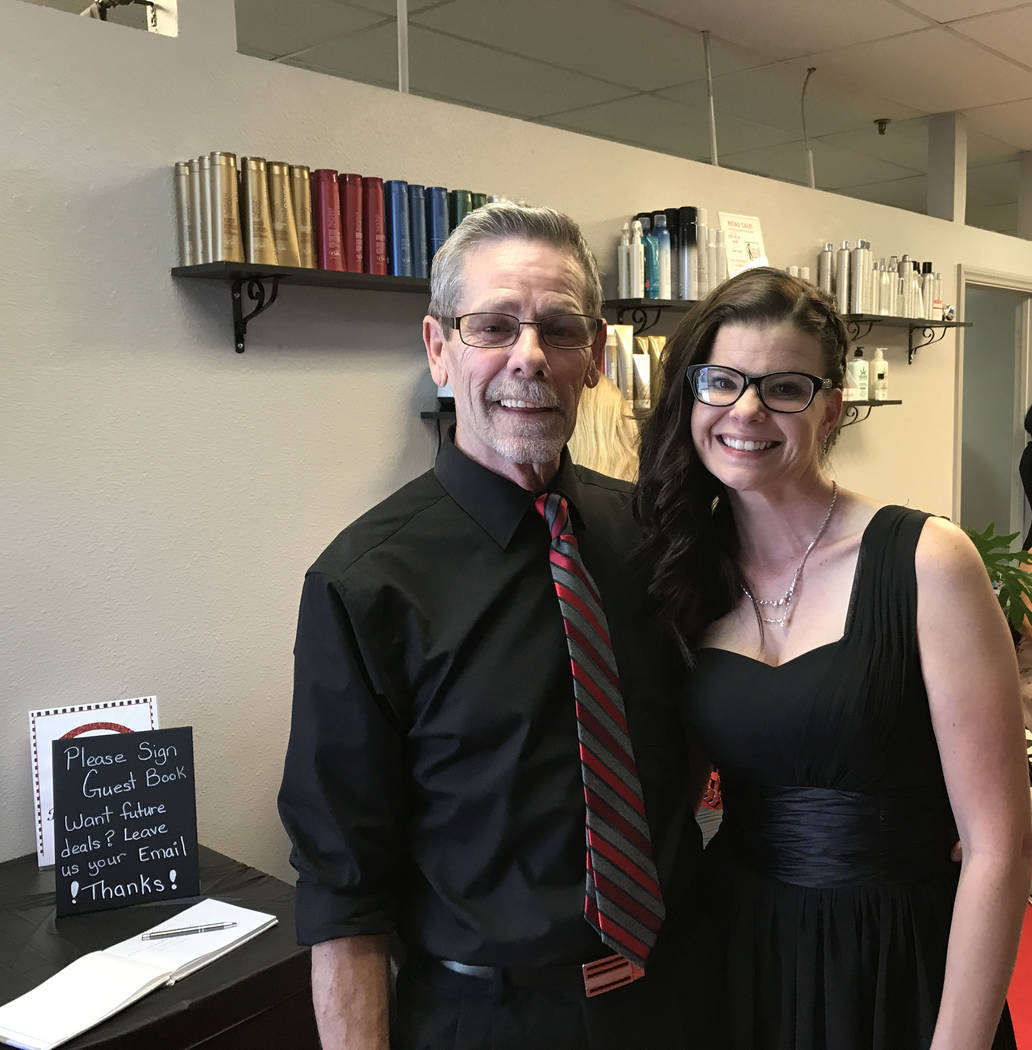 Jeffrey Meehan/Pahrump Valley Times Bob Paynter (left), and Barbara Higginbotham, (right) stand for a photo during their grand reopening celebration on Aug. 15, 2017 at Shear Image Salon at 2301 Winery Road. The duo celebrated the one-year anniversary of the salon with giveaways, raffles, food and other entertainment. 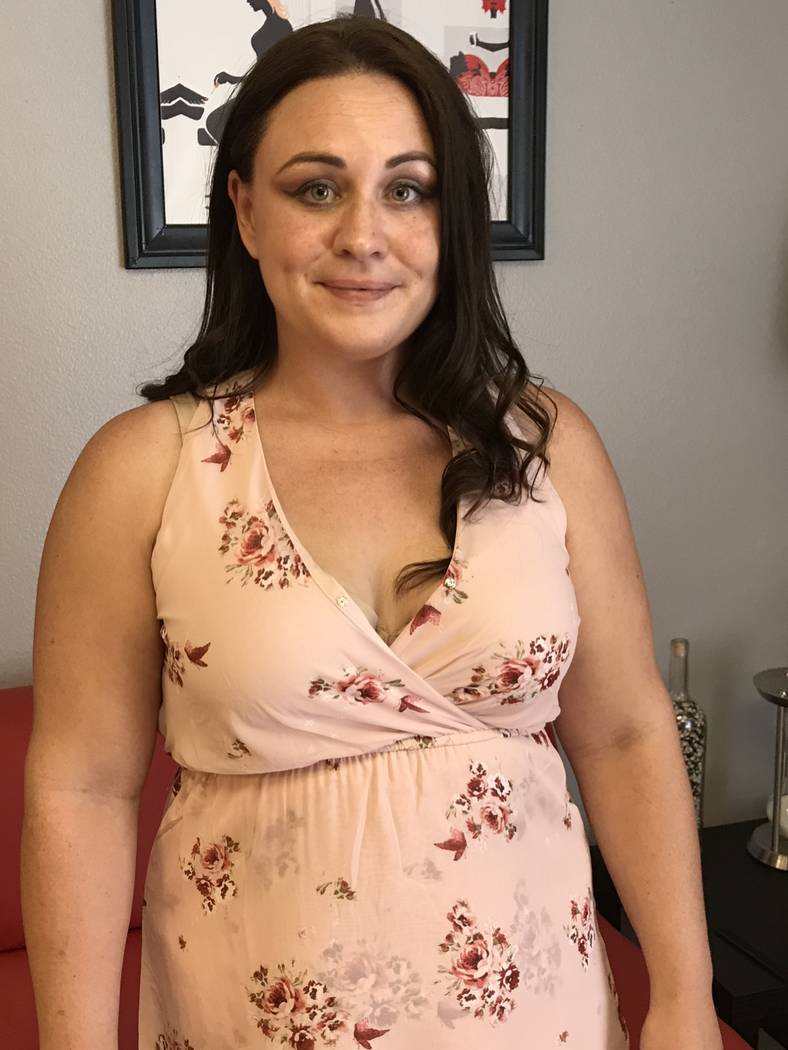 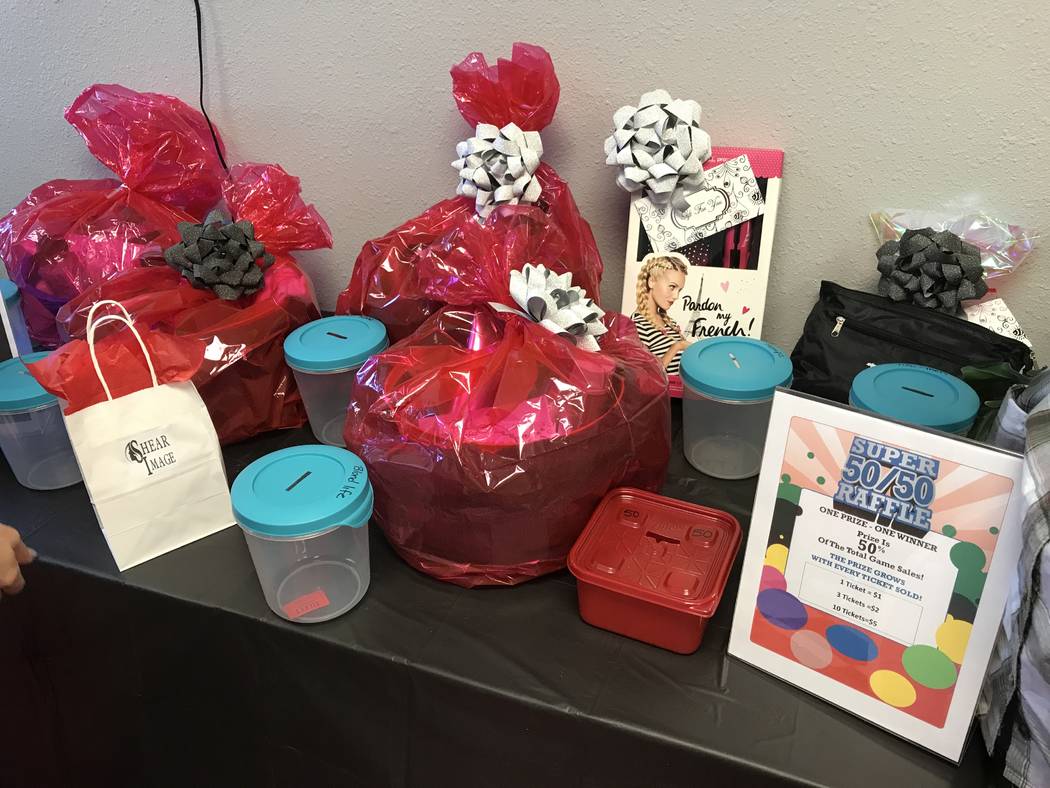 Jeffrey Meehan/Pahrump Valley Times Shear Image Salon celebrated its one-year anniversary on Aug. 15, 2017. The salon had give-away bags, raffles and food. The celebration lasted four hours, with estimates of about 100 eventgoers showing up for the festivities. 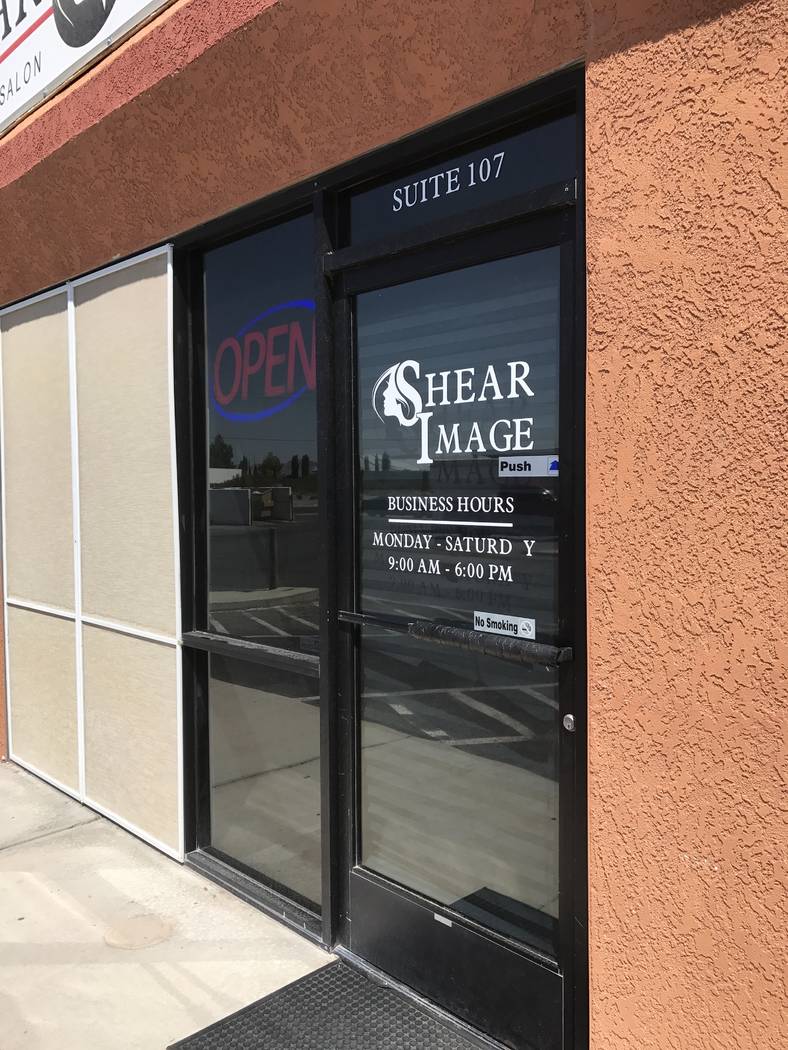 Jeffrey Meehan/Pahrump Valley Times Shear Image Salon celebrated its one-year anniversary on Aug. 15 from 2 p.m. to 6 p.m. The party was filled with give-away bags, food and raffles at the salon at 2301 Winery Road, on the northeast corner of Highway 160 and Winery Road. 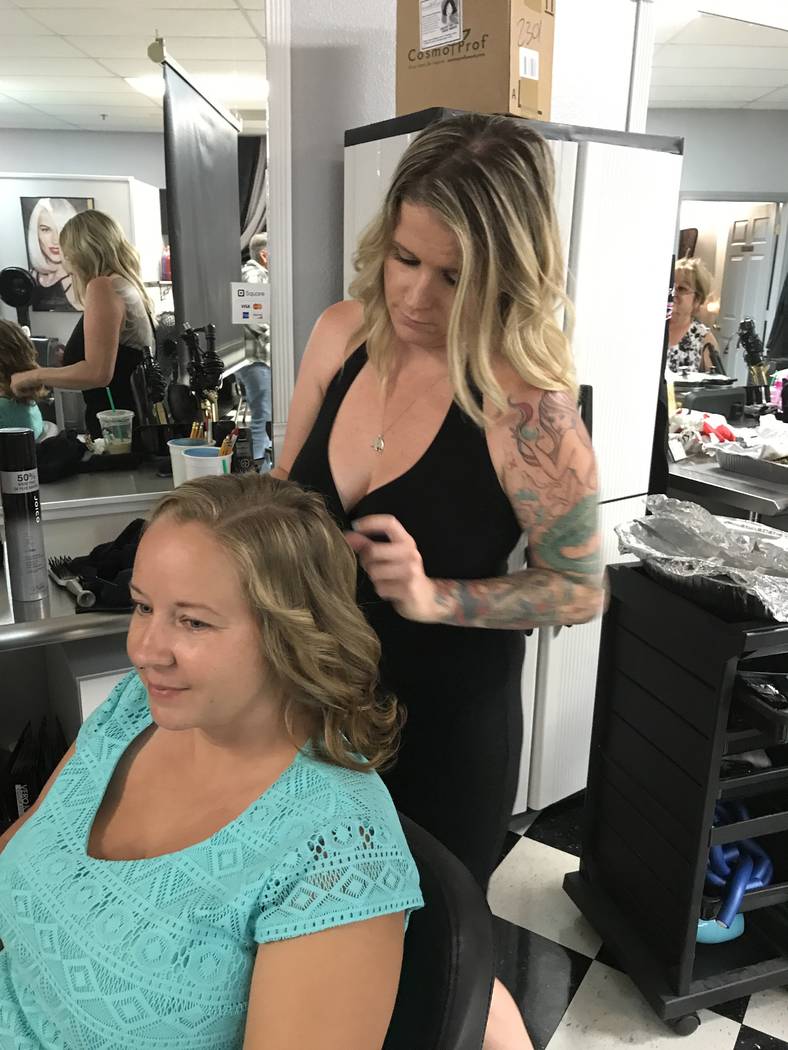 Local resident Sunday Wood in process of getting her makeover at Shear Image Salon at 2301 Winery Road. Wood was one of two winners of the Makeover Madness contest, given in concert with the salon's one-year anniversary celebration.

The Shear Image Salon celebrated its one-year anniversary in mid-August, offering food, drinks, prizes and specials to its customer base and anyone new that wanted to see the group’s offerings.

“We never did a true grand opening because we opened fast, so we wanted to do it on our anniversary, our one year,” said Barbara Higginbotham, co-owner of Shear Image.

The Aug. 15 celebration was estimated to have attracted about 100 eventgoers between 2 p.m. and 6 p.m. at the full-service salon at 2301 Winery Road, Suite 107, on the corner of Homestead Road and Highway 160, adjacent to the Mobil gas station.

Higginbotham and her business partner, Bob Paynter, were also offering guests at the celebration retail specials, giveaway bags, basket raffles and a 50/50 raffle, where people who bought tickets won 50 percent of the amount collected through those sales.

The group also gave away a complete makeover for two local women: Sunday Wood and Melissa Eaton, who walked down the red carpet near the end of the event, just after 5 p.m.

Contestants entered by email by attaching a photo and had to explain why they wanted a makeover. Winners could also be nominated.

This is Higginbotham’s first shop, though Paynter has owned others, he said.

The two met at another local salon and eventually came up with the idea to go out on their own.

“We just decided that it was time to venture off,” Higginbotham said.

Higginbotham is originally from California and has lived in Pahrump for about 16 years. She wasn’t always in the salon business. Higginbotham also has a degree in accounting, she said.

“I did work for a company that I did some accounting and bookwork for, but I like the social part,” she said. “Sitting behind a computer, I enjoy it. I enjoy the data entry, but I miss the interaction.”

By owning and operating the salon, Higginbotham gets to do both, she said.

The business has grown in the past year.

When the duo started, Higginbotham said they were renting out booths to about six stylists.

Since then, that number has grown to eight, and the shop is at capacity, she added.

The crew at Shear Image and its owners have made their clients happy.

“They do perfect hair,” said Giselle Galassi, an attendee of the celebration and avid customer. “They have a good atmosphere. It’s fun to come here. There’s really a positive energy.”

Galassi said she enjoys the no-rush atmosphere of the store.

Higginbotham said the salon is full service but doesn’t offer massages. Bringing that service in will require the salon to go through a remodel, she added.

“That will come with time,” she said.

“We keep what we sell small because we know what we sell works, so we can stand behind our product,” said Higginbotham.