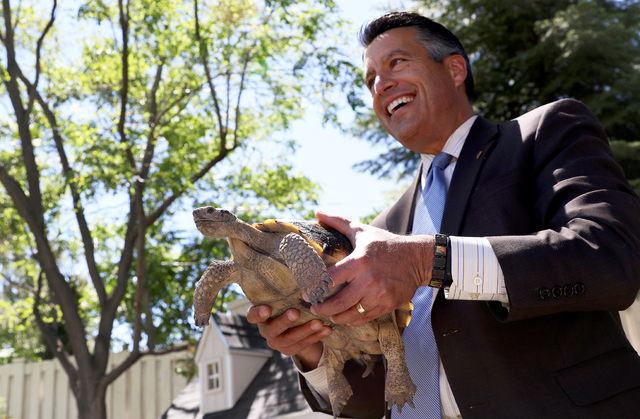 When Gov. Brian Sandoval delivered his final “State of the State” address Tuesday night, Nevada lawmakers received a written report card from the administration highlighting achievements realized over the past six years. Special to the Pahrump Valley Times

Titled “Shared achievements for the Nevada Family,” the report is a synopsis of gains made since Sandoval took office in 2011, when the state was in the throes of recession, the housing market was in the gutter, unemployment soared and state finances were in shambles.

“We were not on the brink, we were over the brink in 2011,” Sandoval reflected during an interview Friday at his Capitol office.

In his first address to lawmakers that year, Sandoval pointed out the obvious: “Nevadans are confronted on all sides with bad news.”

But he championed an optimistic attitude, an opportunity for the Silver State to remake itself. It’s been a mantra he has repeated at every turn, at home and around the globe when he embarked on trade missions to tout Nevada as a place for international commerce and an incubator for innovation.

“We were essentially but not completely all about gaming and mining and so we had a very narrow employment base,” Sandoval said. “Construction and tourism and hospitality, together that would have been 80 percent of our workforce.

“That’s what I recognized right away … first and foremost to improve the economy and bring jobs here but also make us less susceptible to recession, we had to diversify.”

He set his sights on a “New Nevada,” home to high-tech and advanced manufacturing.

It’s been a long, hard, slow climb, one that the two-term Republican governor says took a cooperative effort not only by the state, but local governments, workers, educators and the private sector.

Economic diversification, workforce development and education have been cornerstones of Sandoval’s administration and remain among his top priorities.

“Part of it is seeing firsthand the trauma that was put on folks when they were losing their homes, losing their jobs.

“To me that is one of the most fundamental priorities — to have a job and be able to provide for your family and provide food and shelter.”

Over the past six years, more than 200 companies have relocated to Nevada, bringing total capital investment of $14.5 billion and creating 38,000 jobs paying an average hourly wage of more than $20, the report card said.

Education reform also was and remains a top priority.

“Everyone knew we had poor graduation rates and we weren’t performing well and we needed to be strategic and invest more in our kids,” Sandoval said.

“We have a long way to go,” Sandoval said. “I’m proud of the progress that’s been made but I know there’s a lot more to do.”

Besides jobs and education, there were other priorities as well. The report card lists 13 categories and investments made in each.

State coffers are being replenished, a far cry from the recession era when Nevada swept every reserve account it had and slashed budgets to weather the financial storm.

“When the governor took office we were in fiscal chaos,” said Mike Willden, Sandoval’s chief of staff.

“Six years ago … we swept $200 million from the rainy day fund. Every reserve we had we were sweeping.”

In 2015, Nevada lawmakers approved a $1.5 billion tax package that included the state’s first commerce tax, a levy imposed on business revenues at or above $4 million annually, to stabilize the revenue flow and make it more resilient to economic turbulence.

For the first time this year, the state was able to set aside money into the rainy day account, with $128 million being restored for the 2016-2017 fiscal years.

Jobs and education will continue to be a focus for Sandoval in his remaining two years in office and will be discussed in his upcoming “State of the State.”

But don’t expect the governor to dwell on the past. “The ‘State of the State’ is prospective. It’s not reflective,” he said.

“I don’t want you to suggest or assume that I’m content or satisfied. I’m not,” he said.

The governor scoffs at any suggestion his upcoming speech is about legacy.

“I have a duty to position the state … identify where we have needs and where we can improve,” Sandoval said. “There are always challenges and that’s part of the things you’ll hear in the ‘State of the State.’”

“It is my last ‘State of the State’ but I still have two years to serve as governor. And I intend to do it as vigorously and aggressively as I possibly can.”