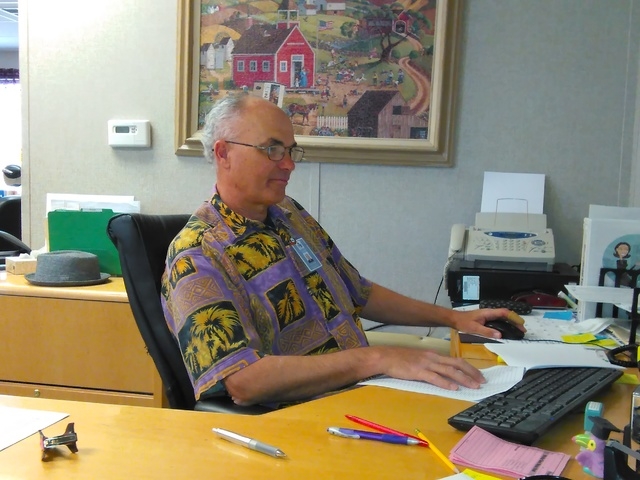 Like teachers, faculty and additional paid staff, volunteers for the Nye County School district play a vital role in the education and well-being of all students.

The volunteers serve in all grade levels throughout the district.

“Those 125 are there every day in the trenches throughout the school district, which includes of course Tonopah, Beatty and Round Mountain,” she said. “Some people actually volunteer 40 hours a week so it’s like a full-time job and they are very dedicated. If you cannot do something to honor your volunteers, then you are going to lose your core. As long as you do that, it makes your core volunteers feel valued.”

Volunteers come from all walks of life.

Bellina said family members of students, business and community leaders, and even police officers and doctors have volunteered over the years.

“I don’t think the district could survive without the volunteers,” she said. “School districts everywhere around the country are suffering and lacking the funds they need to find good teachers and support teams. Without the help of these volunteers, we would have some very overworked and very stressed-out teachers in the classroom.”

Aside from assisting in the classroom, Bellina said volunteers also have responsibilities to report to school personnel, any behavioral issues regarding students.

“As a school volunteer, they may notice students disobeying school or classroom rules,” she said.

“Their responsibility is to call such matters to the attention of the teacher or other supervising school personnel. They should never take corrective measures into their own hands.”

The Nye County School District makes an effort to recognize the valuable efforts of volunteers at least once a year.

Bellina said district staff try to make the event a memorable one, as they were all treated to an international buffet, provided by several restaurants in the community.

“I think this is the first year that we decided to provide entertainment,” she said. “We had the Nevada Silver Tappers perform ‘Proud Mary’ and ‘I’ve got a Brand New Boyfriend.’ We also had the Pahrump High School dance team who did a couple of numbers. I wanted it to be like a luncheon celebration party.”

Bellina said the district makes every effort to keep students safe while on campus or during special events.

She noted there is a very thorough process taken when investigating a prospective volunteer’s background.

“We do a complete FBI background check on everybody, but let’s face it, everybody has a past and no one is perfect,” she said. “There is a process for those who want to become volunteers, where they come in and fill out an application. It is pretty lengthy because the safety of our children is very important.”

The application process for parents who have children are given special consideration if they wish to volunteer.

Bellina also said the new program has streamlined the sign-in process for volunteers each day.

“Instead of going in and signing in on sheets, they just go to the school computer and put in their number,” she said. “It sends me a report every month so we have pretty much gone paperless as far as that’s concerned. Volunteers have played, and will continue to play, an important and valuable role in Nye County schools.”