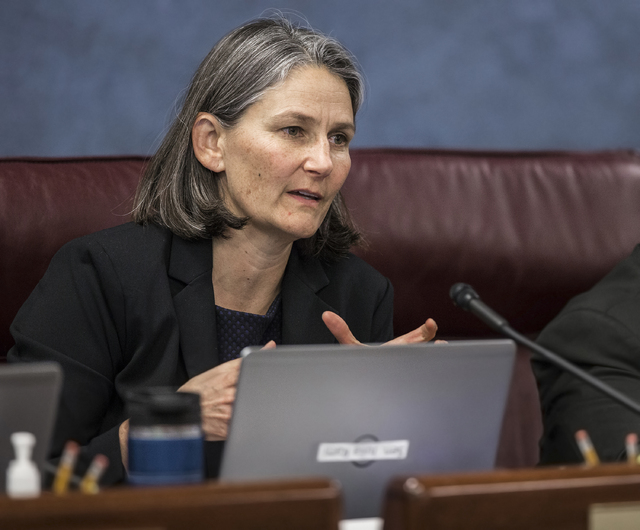 Benjamin Hager/Las Vegas Review-Journal State Sen. Julia Ratti, D-Sparks, listens to comments from the public during the fourth day of the Nevada Legislative session on Thursday, Feb. 9, 2017, in Carson City. She said in a recent interview that “there is broad-based support in the American public for many different kinds of common-sense gun legislation..."

Democrats will co-sponsor a bill to ban bump stocks in the 2019 Nevada Legislature if the federal government doesn’t act first, a state senator says.

“To be absolutely clear, by requesting this single bill draft, it doesn’t mean there won’t be a broader conversation about reasonable gun management in the state of Nevada,” said State Sen. Julia Ratti in a recent interview said on Nevada Newsmakers.

“There is broad-based support in the American public for many different kinds of common-sense gun legislation, so I am absolutely certain that there will be a broader conversation than just bump stocks,” she said.

Ratti, D-Sparks, hopes more Republicans will sign on to gun legislation, even though they have not — as a party — supported past efforts to place restrictions on gun sales with background checks at the Legislature.

Traditionally, Nevada has an independent, libertarian tradition of gun ownership.

“Many Nevadans have been impacted by this tragedy, deeply,” Ratti said. “So we may see that it is not the partisan issue it has been in the past. Maybe I’m being idealistic, maybe I’m being Pollyanna but I don’t want to assume that just because somebody has checked a certain box on a political party, that what happened in Las Vegas doesn’t touch them in a way where they might reconsider the positions they have held in the past.”

Congress could act on banning bump stocks before the 2019 Legislature meets, Ratti said. In Nevada, the Legislature meets every two years with the 2017 session ending in June and the next one set to begin in February 2019.

“It is my sincere hope that this is solved at the national level,” Ratti said. “But we wanted to make sure our national leaders, as well as the community, know that if Congress doesn’t take action, that as Nevadans, we were prepared to.”

Bump stocks, available for about $100 to $200 according to USA Today, are devices that use the recoil of a semiautomatic firearm to rapidly pull the trigger, mimicking automatic fire.

“Having a piece of equipment that can turn a rifle that isn’t illegal into something that would otherwise be illegal, seems pretty straightforward,” she said.

Ratti addressed concerns that the Las Vegas mass shooting might be too recent to talk about political implications.

“Certainly I know that many people will say that it is too early, that they are still grieving and that we should not be talking about policy,” Ratti said. “But what I am finding is that there are an equal number of individuals who are traumatized because they see their legislators continue to not take action. So, it is a fine line as a legislator.”

Ratti will also most-likely reintroduce a bill she sponsored in the 2017 session to bar people convicted of stalking or are under an extended protection order for domestic violence from owning a gun. The bill was SB 387 in the 2017 session.

“We made it through one house (state Senate),” she said about SB 387. “There were questions when we got to the second house so I want to make sure that in that particular bill, we are having conversations with law enforcement and judiciary prior to the next legislative session. And if we can build a version that makes sense to people, I will probably be, personally, bringing that back.”

Attorney General Adam Laxalt is expected to be the front-runner for governor in 2018 for the Republicans. The shootings in Las Vegas may put pressure on Laxalt after his failure to enforce the ballot question that required background checks for private gun sales, Ratti said.

“It is an area where there is a clear loophole,” Ratti said. “It passed in the state. Yes, it was a narrow majority but it was still a majority. I personally believe there was already pressure on him but yes, this amps up the pressure.”