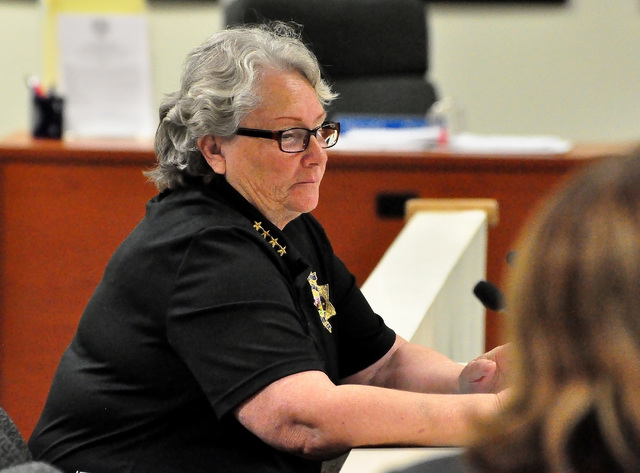 The Nye County Sheriff’s Office is in need of new facilities and equipment as the growth of population drives up demand for its services.

“I brought this item to the planning subcommittee because they asked for my CIP wish list,” she said.

Wehrly said currently, two projects are in the planning stages. One of them is a police firing range that would provide space for semi-annual firearms qualifications and technical training. Another one is the evidence room that would support Nye County’s need for evidence storage space.

“We’d really like to have it attached to the existing building, but if that’s impossible, we’ll take what we can get,” Wehrly told the subcommittee about the evidence room.

“We have a probable cost around $400,000 for that building and we are looking at bare bones,” she said. “It doesn’t include the site to purchase.”

Wehrly added that she wants to meet all of the required codes and regulations and complete the projects “as frugally as possible.”

The CIP includes new facilities or expansions of existing facilities, and does not include equipment, vehicles, maintenance or repair of facilities. But Wehrly said that the department also needs to update some of its equipment. She said 40 percent of NCSO vehicles have over 180,000 miles.

“So, we are looking for four K-9 SUV’s, five detective vans and ten patrol cars. And we’d like to have a mobile command post outfit,” she said.

The total cost of all of the vehicles comes to almost $1 million.

Additionally, Wehrly said the county’s SWAT armor is out of date. The county currently has 10 SWAT officers and would require 10 new sets that would total $85,000.

Wehrly said the department’s Tazers are out of date. The NCSO needs 40 of them at $2,900 apiece.

Another major upgrade on the list is redesign, purchase and installation of a new surveillance system at the Nye County Detention Center in Pahrump that would cost $400,000.

The subcommittee requested information from several departments, including Pahrump Valley Fire and Nye County Department of Public Works to estimate the costs of necessary future CIP improvements and to determine the impact fee amounts.

Nye County Principal Planner Steve Osborne said the mandate for the subcommittee is to review proposals and determine the reasonableness of the requests, prioritize them and provide input to the Nye County commissioners. Nye County pays for the infrastructure.

“The funding for CIP projects comes from impact fees for streets, fire, police, and parks which are paid by builders at the time of building permit issuance or prior to issuance of a certificate of occupancy,” Osborne said in an email following the meeting.

The NCSO requested and received the original evidence and training room addition several years ago. Additionally, the Pahrump Detention Center was a CIP.