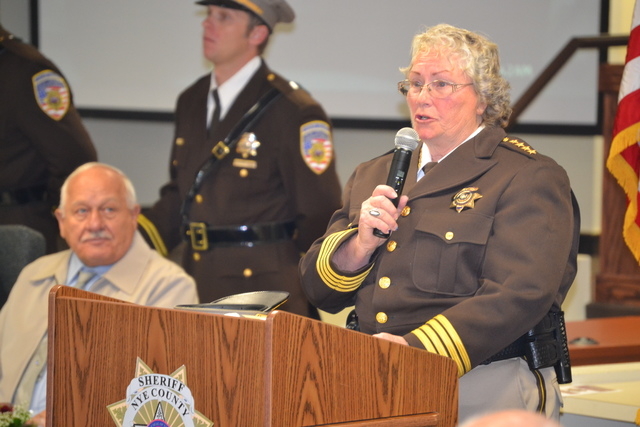 Nye County Sheriff Sharon Wehrly reacted to department budget cuts by taking a proactive approach to create sources of revenue in hopes of saving positions, programs and full functioning of the Tonopah jail.

Cuts to public safety, as well as other services, were made at Tuesday’s County Commission meeting to help offset the growing revenue shortfall in the county budget.

County Manager Pam Webster said the county is facing a $2.5 million shortfall, driven by lower-than-projected property and consolidated taxes, to end this fiscal year, and as much as a $3.2 million shortfall for the next budget cycle starting July 1.

Cut from the sheriff’s budget included $800,000 allocated toward the Tonopah jail, elimination of $172,000 for the D.A.R.E. and G.R.E.A.T. programs, which provide youth education and liaison services, and one furloughed day per month per employee.

Sheriff Sharon Wehrly, who took over the office in January, said that she is taking a proactive approach to providing solutions to cover the shortfalls which include introducing a number of programs that could potentially offset the cuts.

“We don’t want to close down the (Tonopah) jail or lose employees if we don’t have it,” she said on Wednesday.

The cutting of $800,000 of the jail’s $1.2 million budget would leave the facility a holding center for prisoners that would be transported and housed in Pahrump. A near shutdown of the the Tonopah jail would affect many different agencies other than the Nye County Sheriff’s Office, she said, as many law enforcement agencies rely on the availability of the jail.

Wehrly met with county officials on Wednesday to outline detailed plans to create revenue which include an e-ticket traffic ticket payment system, hosting a SWAT team training sessions and “renting beds” in the Pahrump and Tonopah jails.

Wehrly said that budget cuts will not affect the shared-officer position that covers the towns of Amargosa Valley and Beatty, funded by half-cent sales tax revenue from those towns. That money, she explained, can not be used for anything other than creation of a new position, and has already been collected.

Wehrly said that the Nye County Sheriff’s Office will maintain a strong and visible presence in the community while working through budget issues with administration. Police, correction officers and civil employees will continue to provide consistent coverage through changes in shift structure, she said.

Undeterred by the county’s looming financial crisis, Wehrly said she is committed to public safety and remains positive that the problems can be resolved. She is also committed, she said, to being part of the solution.

“We have to give it (ideas for generating revenue) a good old college try,” she said. “Maybe it will work, and maybe it won’t. But we have to do something.”