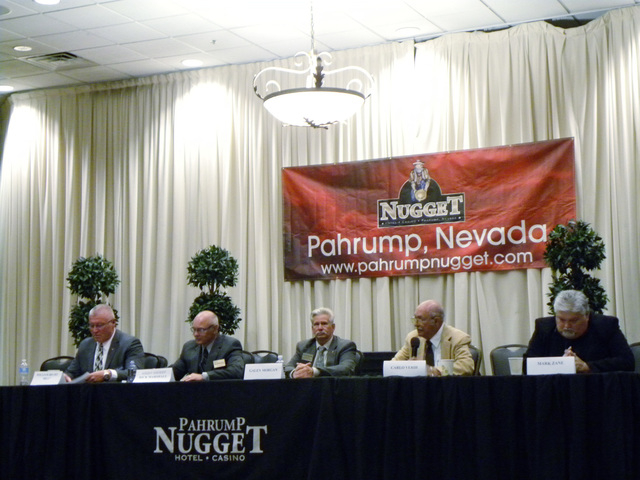 Budget concerns, views on the constitution and working with the local police union were among the top questions for sheriff’s candidates over the course of two events at the Pahrump Nugget and Pahrump Senior Center in the last week.

As far as the NCSO budget is concerned, each candidate has their own ideas on how the money issues within the department should be handled.

“I believe (the budget) can be controlled by managing the staff better, managing their resources better and being careful of what you order, or what you purchase and what you don’t purchase because as we’ve seen, when it gets out of hand, we lose six dispatchers in the Tonopah area,” said Galen Morgan, a former California correctional officer and self-styled constitutional candidate.

He added if possible he would like to hire a budget analyst to keep tabs on the budget to prevent the department from overspending.

Sharon Wehrly, a special investigator with the Nye County District Attorney’s Office, said with her experience working in management and administrative roles throughout her career as a peace officer, the first thing she would do to if elected would be to have an audit conducted on the department, including its budget, to determine what they are doing right and what they need to work on.

NCSO Det. Eric Murphy said if elected his plan is to create a budget strategy within 30 days of taking office, looking at the current budget and determining if there any areas within the office where money is unnecessarily being spent and then making corrections to their spending from there.

Mark Zane, a private investigator and former NCSO undersheriff, said there needs to be a thorough analysis of what’s been going on inside the office and that they must find a way to live within the means provided to them by the county.

“We can’t have all the toys, bells and whistles. We have to live within the means Nye County taxpayers provide us with,” he said.

Former NCSO Capt. Bill Becht said he believes the budgeting system in the department is broken. His solution to the problem — communication.

In the past Becht said he was able to repeatedly come in under budget for his department, helping provide needed funds for other areas of the sheriff’s department.

“As far as my operation when it comes to budgeting, communication is going to be the answer. Monthly budget reports to the commissioners and open door policies to all the citizens, anyone who wants to come in and view the budget will be more than welcome to,” he said.

Assistant Sheriff Rick Marshall, Sheriff Tony DeMeo’s hand-picked successor, explained how the budgeting process currently works for the NCSO, and what changes they’ve made to keep from going over.

“Now what we’ve done is we’ve had weekly meetings with our staff to get the budget under control. We’re not $1 million over like some people say. We’re only about $100,000 within budget so we’re not $1 million over. What we’ll do is keep in contact with Susan Paprocki, the county budget director, and we let her know where we’re at, what funding we need, if we have unexpected funds that are being expended…and we work with the county now to make sure we come in under budget. So we’re going to continue that process,” he said.

The candidates all seemed to agree that in order to have a good working relationship within the department, there needs to be good communication between management and the union.

“I’ve worked with one of the largest unions in California…We worked on a lot of things. We negotiated contracts, we negotiated staffing packages and actually if you build a trust and rapport you can work with them to your benefit just because of the trust that you have,” Morgan explained.

Zane added that as someone who has been on both sides of Nye County Law Enforcement negotiations, when communication breaks down or there are problems in the department, that’s when there are problems between the union and management.

“What I’d like to focus on is the one word in the question, does the union interfere with operations. And that’s a matter of the relationship management has with the working deputies, the line troops. And it can be contentious or it can be compatible. If everybody agrees this is the path we need to take and the goal we need to obtain for the people of Nye County, we’re all good. Where it becomes contentious is when there are questions about leadership and the effectiveness of the operation from the line troops…you can’t have that. We’re supposed to be compatible; we’re supposed to be on the same page, serving the community,” Becht said.

Marshall added that while sometimes the union and NCSO management might disagree, they need to continue working together to help better serve their communities.

“You have to have a good relationship with your association. If you don’t and you’re at odds with the association, basically what you’re going to have is disgruntled people and then you have disgruntled people coming out to see you and then you have a problem. You cannot have that kind of product out there. Our job is citizen contact,” O’Donnell said.

Murphy, who currently works with the union agreed that a good working relationship between the sheriff and the association is important, and said he believes he can foster that kind of relationship within the department.

When some of the candidates were asked about their view on the Constitution and what they would do if the BLM ever tried to seize land from a Nye County resident, each explained there position and how they would handle such a situation.

If an agency like the BLM or even the sheriff’s office were acting outside its scope, Becht added that it would be the responsibility of either law enforcement or even citizens to stop that action.

Marshall said that while on the campaign trail he’s engaged some of the county’s remaining ranchers, many of whom are worried that something similar to what occurred in Bunkerville could happen to them.

“It’s very simple. There is no seizure of private property without due process of law. No one can come in and seize your property, no one can come in and take your cattle without due process of law. And that’s why the sheriff is there. He is the vanguard between the feds and them taking your property unlawfully. That cannot be allowed to happen, and it will not be allowed to happen.”

Former customs agent and sheriff’s candidate Carlo Verdi said because states are given sovereign rights, federal agencies must report to a local law enforcement agency before carrying out whatever task they were sent there to do.

Ray “The Flagman” Mielzynski said the public has forgotten that they are in charge of their own destiny, “We’re the superior power. We’re the people and this is what counts.”